Another beer from 32 Via dei birrai brewery – Audace 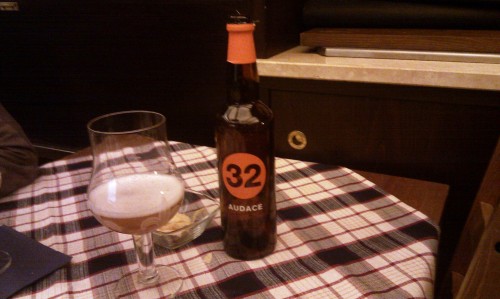 Back at the Oasi della Birra in Testaccio last night. That’s “wah-zee”, not “oh-ace-ee” della Birra. My pronunciation got corrected (rightfully so) just the other day.

As per usual, you ask for beers from the scrappy menu, and they haven’t got them. So he suggested something else and as we were busy yacking we just said okay. We ended up having another of the range from 32 Via dei birrai birrificio (brewery), with their snazzily designed bottles, here terribly photographed on my phone.

Last time, I tried their Atra, a strong brown ale (7.3% ABV). This time it was Audace. On their site, 32 describes it as a birra bionda forte (Belgian strong ale). The first bit means strong blonde beer – and indeed it was strong, even more so than the Atra, which is already hefty enough for someone who’s grown up with British ales. When I say “grown up with”, I of course mean, “learned to enjoy responsibly at a legal age”. So yes, Audace is 8.4% ABV. Audace indeed. In case you hadn’t guessed from the Latin root, the name means “audacious”.

It’s audacious on a couple of levels. Firstly and foremostly because it’s ridiculously drinkable for such a strong beer. Even the Guida alle birrre d’italia (Guide to Italian Beers) 2013 says it’s molto beverina, nonostante l’alta gradazione alcolica: “very drinkable, notwithstanding the high alcohol content”. Secondly, it’s got a really notable citrus, slighty spicey, flavour. The brewery’s in-house experts have got it right when they refer to its taste giving una sensazione citrica astringente: “an astringent citrus sensation”. It’s reasonably hoppy, but that is balanced beautifully by the citrus flavours, spicyness and malt (it’s double malted).

Just reading 32’s site some more now, it says something appropriate to the current flap in the UK media about certain stray red meat.

The site suggests what food it pairs well with: Cibi senza salse grasse ma sostanziosi, affumicati come gli sfilacci di cavallo, o salati come montasio stravecchio e ostriche, in quanto birra poco luppolata. Which means (ish), “As a lightly hopped beer, it goes well with hearty foods without greasy sauces, smoked foods like shredded, cured horsemeat, or savoury/salty foods like Montasio Stravecchio [a type of cheese] and oysters.” The northeastern food suggestions – both the horse and the cheese – are in part because 32 is in the Veneto, inland from Venice.

I’ve never encountered horsemeat in Rome, though it’s probably available here and, frankly, sfilacci di cavallo has got to be nicer than the pajata alla griglia I tried the other day. It’s the intestines of unweaned veal (though some say lamb), grilled. It smelled and tasted of the digestive tract. Which doesn’t come as a surpirse. What surprises me is some people’s passion for it. (Sorry Rachel – I know I had to experience it, but I can’t pretend I enjoyed it!)

Unsurprisingly, half a 75cl bottle later I was feeling quite amenable. While there wasn’t any sfilacci di cavallo available, the boss of Oasi did encourage mean to buy another of 32’s beers to take away. I won’t say “one for the road” as that a bloody silly expression as it implies driving. Come on people: Walk. Public transport. Taxi. Designated drivers.

Anyway. Watch this space. I’ll be reporting back on 32’s Oppale soon. Untappd calls it a Belgian pale ale, the gaffer at Oasi referred to it as a lager. It’s only 5.5%, which is another surprise considering these previous experiences with 32’s beers.