Last night we made it back to Necci, in Pigneto – the neighbourhood that was once on the wrong side of the railway tracks, but has now become something of a haven for (young, and young-ish, black-clad) people wanting to do a bit of boozing and yakking away from any crazy Roman traffic. Via del Pigneto itself has a great traffic-free section that’s packed with bars, but cross over another set of tracks, turn a few corners among the unique low-rise buildings – very different to the apartment blocks of other Roman neighbourhoods – and you’ll get to Necci. Or !Necci dal 1924″.

Now, as I wrote here, the whole “open since 1498” thing gets my goat. Innumerable osterie/trattorie/ristoranti proclaim their year of founding as if it’s somehow important even when they churn out mediocre food. Not so Necci. This is a place that’s doing so much right. Although it’s nearly a century old, and a neighbourhood landmark, and was the filmmaker Pier Paolo Passolini‘s main hangout when he made his breakthrough film Accattone (1961), it’s not stuck in aspic. The heritage is just part of the fabric of a lively, diverse venue that offers pretty much everything to all comers, any day of the week. Except, that is, a decent beer menu. More on which later.

Although Necci has all this history, and is a great place physically, with a funky interior and shady terraces, its success is also down to a unique scenario whereby it’s run by business partners Massimo Innocenti (manager) and Ben­jamin Hirst (chef), who took over the venue in 2006. Hirst? That doesn’t sound very Italian, and indeed it’s not – he’s a British chef. A British chef running the kitchens of an  Italian eatery? Yes. Shocking.

This partnership is something that’s potentially unique in the Roman restaurant scene. After all, Italians in general are bloomin’ sniffy about the idea of foreigners being able to cook, and yet here’s a Brit proving them wrong, and overseeing a far more interesting menu than many places in Rome. I say that in part because the inventive dinner menu features not just the usual Roman offal, but a lot of fish dishes too – which can be a rarity in osterie/trattorie/ristoranti here, despite the city only being 20km or so from the sea.

It’s not just all about dinner at Necci though. It’s a café with a pasticceria on the opposite corner, a shop, a lunch venue and a great spot for an aperitivo. Indeed, it’s there I had my first (excellent) sbagliato: a “wrong” Negroni, made with vermouth, campari and prosescco instead of gin. They even have an decent wine list. The only disappointment for me was the selection of beers.

The whole ethos for Necci, according to the Projetto Gastronomico section of their site, is an emphasis on organic produce from Lazio and central Italy, and everything made on the premises – “from the cornetti (Italian croissants) to the bread, from the gelato to the tagliatelle, from the cakes to the gnocchi”.

The site uses the word autarchico, which translates into English as autarkic… Yes, I didn’t know that one either, but it means self-sufficient, independent. (They’re exactly the sort of principles I’d like to apply if I ever run a food business.) The site also says Hirst, who initially studied art history before getting into cuisine (working in France, the US and Italy, with experience in patisserie and vegeterian food, though there was little of the latter available last night) works to recreate traditional osteria dishes – but the ones that people may have forgotten. It’s slow food without the rhetoric, apparently. So, in amongst all this, why don’t they have a few more Italian craft beers? Although Massimo flagged up one Italian craft beer on their menu, Steamer, when we came to order, the waiter seemed to determined to sell me a Stella Artois. Which isn’t just industrial muck, it’s decidedly not from Lazio or central Italy or Italy at all. And yet Lazio alone boasts several microbreweries producing interesting, quality beers: Birra del Borgo, Turan and Itineris, to name but a few. 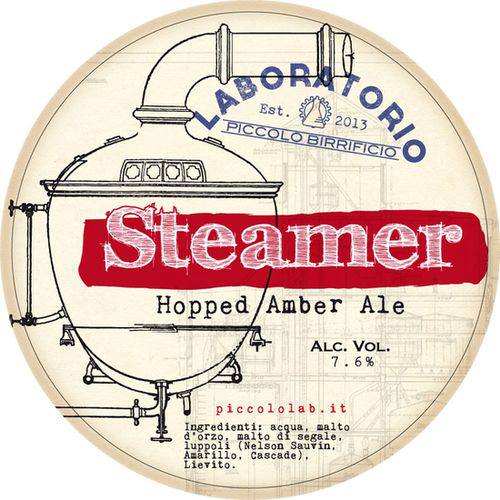 Still, we had a great night, and the Steamer was delicious. It’s brewed by Lorenzo Bottoni under the label of Laboratorio Experimental Brews / Laboratorio Piccolo Birrificio (“little brewery lab/workshop”). The site has a section called Manifesto, where Bottoni talks about how his brewing is always a collaborative experience. Which is nice. Clearly Bottoni and his chums between them have a lot of knowledge and are deploying it to produce interesting beers. They don’t seem to have a fixed brewery location, but seem to be a kind of brewing flying squad. Well, not flying – cycling. I like them even more as, from a quick jaunt round their Facebook page, they seem to be pretty big on bikes. Bravi!

Anyway, Steamer. It’s a hoppy amber ale. But not that hoppy. Middlingly hoppy. On the nicely designed, informative site, the Laboratorio gives the IBU (International Bitterness Units) as 39.7, which puts it on the cusp between mellower pale ales (usually 20-40 IBU) and hoppier, more bittererer IPAs (usually 40-60 IBU, depending on your sources and on type). The hops in question here are a mixture of Cascade and Amarillo from the US, and Nelson Sauvin from New Zealand. Which makes me happy and strangely emotional, as I’ve spent a lot of time in and around Nelson, a marvellous little town that’s played a key role in NZ’s craft brewery scene.

Steamer’s fairly strong, at 7.6%, but goes down smooth, with a body that’s almost verging on the milkiness of a thick stout or porter. A fruity aroma is accompanied by a caramel and biscuitty taste, the latter possibly arising from the interesting use of malted rye, instead of barley. All in all, a highly notable beer. As the site itself says, it’s something that was developed In risposta allo strapotere delle IPA-DIPA-APA, una birra luppolata il cui amaro si accompagna alla setosa ruvidita’ conferitale dalla segale, that is “In response to the excessive power of the IPA-Double IPA-APAs, a hoppy beer in which bitterness is accompanied by the silky coarseness of the rye.” Okay.

So yes. I’m really enjoying Necci. Although I’m disappointed by the presence of generic and or non-Italian beers on the menu, I’m encouraged by the fact that the one Italian artisan beer included has clearly been chosen with care. I just wish this place was nearer where I live…