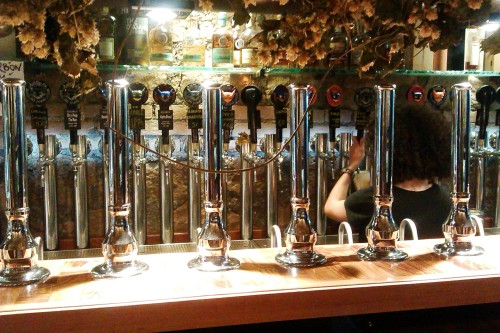 Brasserie 4:20 is not in a prepossessing location. Sure it’s located not far from Porta Portese, a 17th century gate in Rome’s 3rd century Aurelian Wall. And sure the actual street, Via Potuense, is historical, constructed in the 1st century AD to connect the city to Portus at the mouth of the Tiber. And sure the section where Brasserie 4:20 is located comes alive on Sundays for the Porta Portese market, a kilometre-plus of stalls selling tat clothes, cheap electricals and bric-a-brac. It’s even the place to go in Rome to buy bikes or scooters of occasionally dubious provenance. (Porta Portese is one of the locations of Antonio’s desperate search in Vittorio De Sica’s unbearably heartwrenching neorealist classic Bicycle Thieves [Ladri di biciclette, 1948]: go to 9:52 here.)

But, frankly, this stretch of Via Portuense is a scruffy rat-run.

At rush hour, it’s an untrammelled racetrack for Rome’s horrendous car population, and not a great place to tackle on foot – there are no pavements, just potholed gutters. One side of the road is given over to semi-derelict buildings, wasteland and one restaurant overlooking the Tiber. The other side, where 4:20 is located, consists of a large, graffitied wall punctuated with arches. Even when 4:20 is open, it doesn’t exactly look inviting – a dark entrance in the wall, a few smokers outside.

So I’ve walked past dozens of times, without even quite making it inside. Shame on me really, as it’s a) not that far from where I live and b) one of Rome’s most significant birrerie (beer bars).

We resolved to finally visit on Saturday, meeting several Italian friends, many of them counfounding stereotypes by enjoying good beer as much as wine.

Fortunately, at 5.45pm on a Saturday the stretch of Via Portuense was quiet, Brasserie 4:20 safe to approach on foot. The bar was quiet too as although the sun is well and truly over the yardarm as far as we (and other Brits) are concerned, 6-ish is a freaky time to have a drink for Italians, as one of our friends commented straight away on their arrival. Still, at least it meant we had our choice of seating.

Downstairs is an atmospherically gloomy cavern of bare brick walls, a long bar featuring a barricade of taps, and seating that includes a couple of inviting (though tight) horseshoe-shaped booths. We settled into one of these, not realising there was also an upstairs terrace, with awnings. This was handy as we’d just had a massive thunderstorm, which had given way to blazing sunshine. After ordering our first beers, we relocated upstairs to enjoy the space and partake of an aperitivo buffet. It was basic – some couscous, some pasta salad, bread, a few dips – but included in the price of the drinks at that time of the evening.

As for the drinks, 4:20 only has beer, whiskey and water. Downstairs, there are apparently 47 taps, including 12 hand pumps, though I didn’t count them. Upstairs, there’s a more limited selection, with six taps, but hey, it’s hardly a long schlep back, down some stairs and past a mound of containers of fry oil. Yes, there’s also food. In this case, that means burgers (mostly), the smell of which was filling the air on the terrace. They use beer a lot in the preparation of the food, though we didn’t sample anything beyond the buffet.

Beer-wise, there are menus on blackboards on the wall. We weren’t offered an actual menu, though they may exist, especially as they have a selection of bottled beers. These are the only refrigerated beers, as the tap beers are kept in a cellar and served at ambient temperature – important for the “organoleptic quality” according to their site. What this means is that the precise qualities of a bar are better experienced – by smell, taste etc – at ambient temperature. (Ice cold beer is of course nice on a hot day but that’s another argument.)

The beer comes from a variety of craft breweries, some Italian, but also a lot of Belgian, British etc. Among the Italian breweries, a major presence here is Revelation Cat (English site) – a Rome-based outfit whose products are distributed by Impex, which owns 4:20 as far as I can tell. So Revelation Cat is effectively the house brewery.

When we visited, there were 13 Revelation Cat beers available. Fran chose their Little Lover, a 4.5% ABV stout so chocolaty it could almost have been mistaken for a milkshake in a blind tasting. Okay, not really, but it was very pleasant, in a sweet, mild, creamy kind of way.

I’m still on a quest to find a perfect golden summer ale, so I was torn between Salada from Lariano brewery, in Lombardy – a golden ale al sale, “with salt” – and Magical Mystery Gold from Free Lions, a brewery I talked about over here. I got the latter as it was from a little closer to home, Tuscania, northwest of Rome. I’ve still not found my ultimate golden ale, but Magical Mystery Gold wasn’t bad. I seem to be drinking a lot of citrussy beers at the moment, and this was no exception with an aroma of grapefruit. Taste-wise, it was strongly hopped, dry and crisp.

We managed to get in a couple more after this, from the small selection on the terrace. These were California Moonset and Take My Adweisse. We had to order the latter on the strength of the terrible pun alone. Both are from Revelation Cat. These were served in jars. This seems like a strange affectation; I’d rather drink from something that doesn’t have a thread on the lip. The beers were both interesting though.

Take My Adweisse is a 4.5% hoppy American wheat ale. It’s not terribly bitter, but instead is crisp, fairly floral (elder, etc), and refreshing. California Moonset, on the other hand, was fairly odd. It’s nominally a 7% IPA, but I found it pretty challenging, with a pungent odour of, well…. rot? Cat pee? I’d need to drink it again to really nail the description, but I found the smell almost off-putting. Taste-wise it was pretty hoppy, with some serious clashing flavours – resin, citrus, malt. I’m not sure whether it was interesting or unrefined.

Anyway, after all that we had to go – as we had a birthday to attend at Open Baladin, perhaps Rome’s best known beer bar. This experience of two key beer Roman birrerie in one day was telling. Although we had a good time at 4:20, and I’ll definitely go again, I found our welcome a bit unfriendly there, with three staff just giving us a cool stare when we first arrived. Baladin, on the other hand, I’ve always found more friendly, and the staff ready with advice.

Also, I had my most interesting beer of the evening at Baladin. I asked a friend who works there what she thought was their best beer at the moment, and she recommended a Wallonie saison beer, from Extraomnes, another Lombardy brewery. I’m increasingly getting into saisons as they seem to be challenging without the confusion of a beer like California Moonset. This 6.7% beer was golden-orange in colour, with a serious head and an inviting perfume of herbs and spice. Flavour-wise it balanced a slight peppery piquancy with notable, but not overly bitter, hoppiness and a broad fruitiness, tending finally to crisp and dry. In my notes I wrote “fermenting fruit, bubblegum”. Hm.

All in all, a great evening of socialising and beer sampling. And I’m definitely keen to get back to 4:20, see if I can warm them up a bit asking for recommendations, as it’s certainly a serious beer joint, for fans of real beer.