One aspect of Roman life I just cannot get used to is meal times. Or more specifically, dinner time. During the hot summer months (ie now) we’ll be going to bed around 11pm, thinking of that pesky alarm going off at 6.30am the following day, while the sound of chatter, and crockery and cutlery, and kids crying, wafts towards us from the restaurant a few doors down. How the heck can they still be eating at nearly midnight? What are those babies doing up at this hour? My body clock just couldn’t cope with those hours. I cannot even begin to imagine how I’d survive Barcelona.

My troubles usually start around 5pm. I’ve eaten a big lunch at 1-ish, I’ve had a few snacks during the afternoon, but still my body starts telling me it’s time to eat big towards late afternoon. I’m just too programmed. Growing up, the main meal of the evening was always at 7pm, or even earlier when I was a little kid. Around 6pm I’m getting hangry, and around 7pm I really really want to eat. Don’t talk to me. Just give me some damned protein. It’s the Hangry Hour. Or at least it used to be, but in Roma it can turn into the Hangry Two Hours, or more.

This problem often coincides with meeting Fran from her train home from work. On a summer’s evening, we sometimes head straight from the station to a bar for an aperitivo. Last night, this involved a jaunt to the less touristy part of Trastevere – that is, east of Viale di Trastevere, in the bend in the river. Specifically, Piazza del Ponziani.

Although neither of the bars there are any good for satisfying my Italian craft beer cravings, it’s just a nice spot. Although there are ex-pats and tourists there, for the most part it still just feels like an ordinary neighbourhood piazza, where the locals all seem to know each other. I even recognise a lot of them now, and their dogs, though I’m probably still just another straniero to them. I don’t think the girls in one of the bars, The Hole, recognise me yet either, but I still like their bar. I’m not sure what. It kinda lives up to its name, they’re reliably surly, and we even got shat on by gulls earlier this summer, but we keep going back.

As it was The Hangry Hour, Fran insisted with get a snack. In a lot of places, you get a snack (or even a buffet) included in the price of your drink at aperitivo time, but not at The Hole. We paid €8 for a plate of salumi e formaggi (cold cuts and cheese), which turned out to be just the latter. And they were pretty poor. A worse culinary crime, however, was the bread.

Many foreigners still labour under the delusion that you can’t get bad food in Italy, it’s all artisan and hand-made. And blah. Seriously, blah. That’s just a load of bollocks. The bread The Hole gave us was what’s known as pancarré in Italian – basically industrial white sliced bread. It’s not unlike British white sliced made with the Chorleywood Bread Process, the industrial invention that did more than anything else to destroy the craft of baking in Britain.

The process turned 50 last year, and continues to dominate wheat-based industrial “food” products in the UK, despite its nutritional poverty and the fact that it’s quite likely at the heart of people’s problems with eating wheat products, from feelings of bloating to Coeliac disorder. Although certain quarters have been determined to deny Chorleywood products are problematic, other – scientific – work has proved that long fermentation breads are digestible to people with coeliac. Ironically, this work lead by a scientist from the University of Naples.

So yeah, despite the Hangry, I couldn’t really eat that pancarré – I tried a nibble, but it was spongy and bland. And stale. 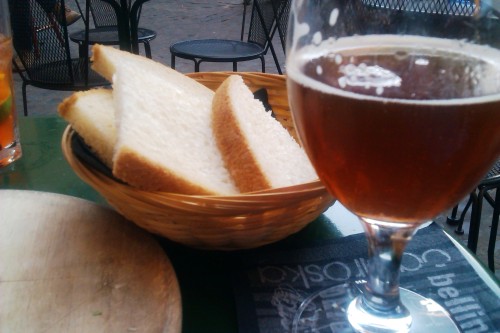 At least The Hole has the one Italian craft beer on their menu available this time. That beer is ReAle, from Birra del Borgo.

Like Birradamare (which I talked about here) Birra del Borgo is one of Lazio’s main local micro-breweries and fairly easy to find in Rome. The 6.4% ABV ReAle is a classic Italian craft beer. It’s an APA – and most Italian craft breweries seem to do APA style beers. So much so that Italian APAs really need a name or category of their own, as they’re evolving from APA much like APA evolved from IPA and other pale ales. (Even though Italian APAs still use American hops, like the ever-popular Cascade. Maybe one day they’ll grow more hops in Italy, and have enough to realy hone a fully Italian APA.)

Italian APAs are generally less hoppy and more malty than genuine US APAs, to suit the Italian palette. ReAle is no exception – the predominant flavours here are malt – notably crystal malts, as the beer has a nice slightly-burnt-caramel flavour, along with a certain orange or grapefruit fruitiness. It’s a very nicely balanced beer, with a certain warmth – not warm like a nice cup of cocoa, but warm from the bright amber-copper colour and flavour.

So even though the beer didn’t exactly take the edge off the hanger, it certainly distracted me from the terrible pancarré and dodgy cheese. Afterwards, we eschewed the dubious delights of Trastevere and headed back to Osteria Pistoia on Via Portuense for a pretty decent dinner.

Random addendum
Talking of hangry, among the many T-shirt designs I’ve mused about over the years, how about a pic of Hulk (smashing, perhaps) with the text: “You wouldn’t like me when I’m Hangry!” If you do have a T-shirt printing operation, feel free to steal this idea – but drop me a line if you do!