When, just over two years ago, we moved to Rome, and specifically just-outside-the-city-walls west Rome, we soon heard about La Gatta Mangiona. This pizzeria in Monteverde Nuovo (Gianicolense), the neighbourhood adjactent to our Monteverde Vecchio, was recommended as one of Rome’s best.

So we went. And were kinda disappointed.

Despite the inventive toppings (alongside classics) created by the renowned owner Giancarlo Casa (at it since 1973) and his staff, and the dough reportedly made with a lievito madre (sourdough starter) and long-fermentation, the pizza was flabby, the service somewhat indifferent. The experts over at The Rome Digest did, earlier this year, highlight the issue of the place’s inconsistency. Then another Rome food expert, Rachel Roddy, went recently and told us that not only was the food good, but there was also an excellent beer menu. I don’t remember the latter from our previous visit – so either it didn’t exist, or you had to be sufficiently in the know to ask specially to see if.

This time, we were in the know, and went with some other beer enthusiast friends. And overall, the experience was much better.

I wouldn’t say it was the best pizza I’ve had, but it was still delicious, the beer menu is indeed great, and the suppli were among the best I’ve tried in Rome.

I love suppli, Rome’s delectable deep-fried rice-and-mozzarella balls, but many are pretty average, and probably not even made on premises. La Gatta Mangiona’s, however, were clearly hand-made, clearly freshly made, and they even do suppli-of-the-day. Though they don’t exactly seem to be seasonal. We went in September, way outside spring’s asparagus season, but they had suppli made with them and saffron. The other suppli-of-the-day was sausage and cream; Fran says “Mmmm, it was delicious.”

I just had a classic suppli, made with tomato risotto. It was a decent size, slightly wonky, crisp, well-seasoned and perfectly cooked, with the mozzarella inside forming strings as it should. Yum. My pizza, meanwhile, was one of their specials, and was called “Four Onions”. Along with the onion frenzy, it also featured tomato, vaguely picante sardines, olives and flakes of salty pecorino.

Generally I’m from the school of thought that simplest, least cluttered pizzas are the best (and indeed we’ve got Italian friends who only ever eat Margherita), but this was great. Not as good as the suppli, but still great. Clearly, I was so excited to get started on it I failed to take even one in-focus photograph. Doh. (Check out Gillian’s Lists here for some excellent photos of Gatta Mangiona’s wares.) 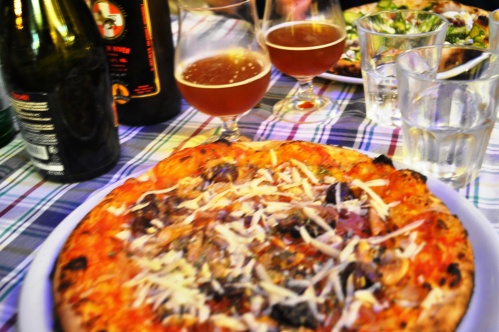 Now, the beer. Being out with two Italians, one other Englishman and one Canadese, we didn’t demolish beer after beer as we might have done had we been out with solely boozy Brits, but we did try a couple from the menu. This menu is indeed extensive and far better than any other pizza place. Even Trastevere’s entertaining but kinda overrated Bir & Fud (geddit?) doesn’t have much beer by comparison, though they do have taps. Most pizzerie, including the great, bargain options Da Remo (Testaccio) and Ai Marmi (Trastevere) meanwhile, just offer wine or crappy industrial lager.

You can find La Gatta Mangiona’s beer and whisky menu from their site (click ‘Carta delle birre e dei distillati’ – a PDF; not entirely the same as the photocopy they gave us). The beers are divided into wheat beers, then light and dark beers of low, medium and high ABV (from 3.5 to 10.8). Clearly La Gatta Mangiona takes its beer very seriously.

As I’d previously written about Calibro 5, a beer made with Kölsch that is designed to go well with pizza, it seemed suitable to have another beer made with the same yeast and in a similar style. This was the unpronounceable Tschö! from Maltovio brewery in Campania –that is, the region with Naples as its capital. (I’ll be talking about Naples again in the next post, as we’ve just been there.) Maltovio’s site can be found here. I really hope the photos are tongue-in-cheek. They remind me of comedy duo Armstrong and Miller‘s sketches about catalogue models in their natural habitat (sadly, I cannot find video snippets online).

This was a very straightforward beer, with some aroma of grass and hay, a blonde, murky body and a simple taste, with some slight citrus touches and a dry mouth-feel. Indeed, it probably would have been a perfect accompaniment to pizza, but between the six of us we finished it quickly while we were eating our antipasti.

The second beer we had was Spoon River from Grado Plato brewery in the Piemont (Piedmont) region of northwestern Italy. The fact that it’s called Spoon River and not Fiume di cucchiaio fits in with this being in the style of a English bitter, or at least that’s what the Guida alle birre d’Italia 2013 (Italian Beer Guide 2013) says. Spoon River’s own site says it’s an amber ale that’s also (like Kölsch beers) good to “accompagnare a tutto pasto i piatti più svariati dai primi alle carni” – “accompany all meals, everything from primi (pasta, risotto etc) to meats.”

Its smell brought to mind toffee apples – so caramel malt and fruity. It’s got a medium body and yes, a very malty taste too, with some lasting bitterness.

I wish we’d tried more, but that’ll have to wait until next time.

Oh, and if you’re wondering about the name, a gatta is a female cat, and a mangiona is a glutton. So the Greedy Lady Cat. For want of a better word for a female cat. Why don’t we have a name for a female cat in English? If a male is a Tom (well, an intact male), what’s the equivalent? Some suggestions are a Queen, or a Molly, or a Dam, though these terms aren’t in common usage, especially for non-pedigrees. The Gluttonous Dam sounds nice though.