Final beer at home in Rome

We’re leaving Rome tomorrow. The shipments of boxes we sent a few weeks ago has arrived in England, the cats similarly made it home on their road trip. But we’re still here until tomorrow, with just a suitcase and rucksack each. And massive piles of clobber to fit therein. It seems to have bred since we packed the boxes.

And of course we have a few final bottles of beer, one of which is this Birra del Borgo eighth anniversary brew, ReAle 8, from their birthday back in May 2013.

Along with Baladin, Birra del Borgo is one of Italy’s most respected breweries. Plus, it’s in Lazio, so, during our time in Rome, I could drink a lot of their wares while also maintaining locavore inclinations. Yay. 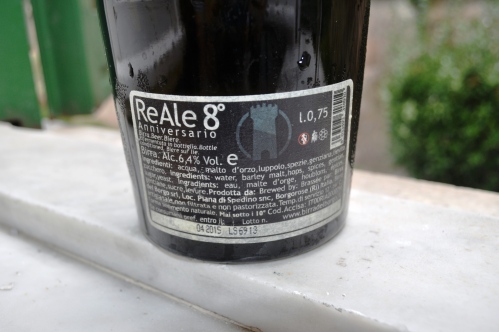 ReAle 8 is an Italian American Pale Ale-style brew, amber in colour and part of their annual birthday celebration variations on a theme. I’d love to tell you about the scent/nose/odour/smell, but I’ve got a stinking cold. All Fran can say is “metallic”.

The taste, however, I am getting (at least in part): it’s full-bodied, rich and fruity, providing one of those great, almost chewy mouthfuls with its well-balanced flavour of malts, stewed apple, caramel, and a hoppiness that’s fresh rather than overly bitter. It’s also made with gentian, but I’d be lying if I said I got that.

Thanks to Michele Sensidoni from Mastri Birrai Umbri, who gave us this beer, along with five bottles of one his new test brews. One of which I’m hoping to smuggle back to Britain tomorrow. He’s been a big part of my education in Italian craft beer.

Thanks also to everyone who’s ever served me a craft beer here in Italy, notably Elise Grazzini at Open Baladin whose knowledge and multilingual skills also helped with my  education, after we first found the bar early in our time here.

Oh, and thanks to Nanni Moretti too. His film Caro Diario (Dear Diary, 1993) was one of the first specifically Rome-based films we watched when we moved here, and it helped give us a sense of affection for, and some rudimentary glimpses of understanding of, the city. And, would you believe it, he moved in next door a few weeks ago. So we arrive seeing him on film, riding his motorino up Via Dandalo, and we leave seeing him in the RW, parking his motorino just outside our palazzo.

5 responses to “Final beer at home in Rome”