Although I’m really not a cake decorator, and I really really really don’t like artificial food colourings, I couldn’t say no when sister-in-law Sharon said we had to make Ellis a Captain America birthday cake. Especially as I’m a big comics geek.

This involved a late-night session making one of those cake-dec bobble head figures. It was a collaborative effort: I did the head and some trimmings, Sharon the body, Fran the shield. We were all quite pleased with it. Partly as it was fun to do, but partly as our Captain America is amusingly portly, like he’s retired and taken to the beer. Even his belt and the stripey part of his costume looked more like a girdle or corset. Oh, and we’d had a little booze too: the girls on local Missouri wine from Pirtle in the historic town of Weston, me on beer from Boulevard Brewing Co in Kansas City (which is also in Missouri, mostly).

Really enjoying their bottle-conditioned beers. (I’m drinking one now too.) Like the sound of the brewery too. “Boulevard’s mission is simple: to produce fresh, flavorful [sic] beers using the finest traditional ingredients and the best of both old and new brewing techniques.” That’s what I like to hear.

Slightly bemused that US beers seem to have to carry the government health warning but don’t have to include the ABV on the bottle though.

We’ve tried Boulevard’s Unfiltered Wheat Beer, which is 4.4% according to the site, and surprisingly mellow for a wheat beer. Apparently it’s also the “best-selling craft beer in the Midwest.” Their 5.5% Pale Ale, meanwhile, is also pretty mellow, but with a really well balanced hoppy tang and caramel maltiness. As for what I’m drinking now – not sure. The brother-in-law said the label came off after a session in the chilly bin/eski/cooler/cool box (delete according to nationality) and he can’t remember; and I can’t find it on the brewery site. 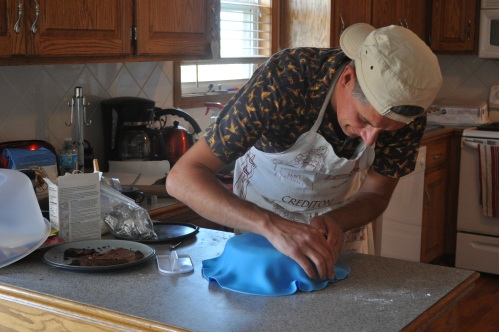 The cake. Although I can’t really eat coloured sugar paste, I made a nice chocolate cake underneath. I used one of my favourite recipes. It’s originally based on a cardamom cake by Mollie Katzen of Moosewood, but it’s such a great recipe it can be varied according to inclination and occasion. Here’s a metric version of the original US recipe on Cake-off, a site I used to do with my friend Jo. The chocolate version I did left out the nut mix, and replaced about 50g of the flour with cocoa. I also added some finely chopped dark chocolate. It’s such a good cake: dense but moist.

For the party we also did some pizza. This was an interesting challenge, as was making a loaf of bread later on. Like when I first moved to Italy, I find myself in a country where the types of flour, and their packaging, are entirely unfamiliar. And here a lot of the flour is made with GM grain. At least a badge that indicates the non-GMO options seems to be a legal requirement. 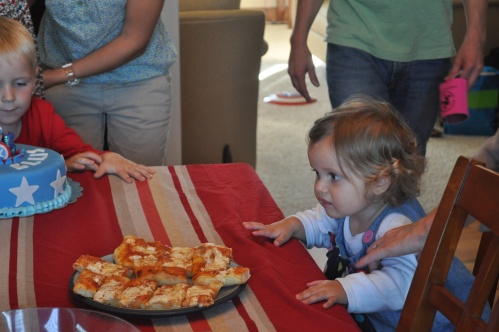 A lot of the flour, sadly, is also bleached, and packed with gratuitous additives. Still, there’s also some organic available – even in the dreaded Walmart, that poster child for the problems of the industrialised food chain and a place I visited for the first time this week.

Perhaps more problematic in practical, rather than ethical, terms, however, was the way the packages labelled protein content – there was no percentage. So I really couldn’t get a great sense of what was a high protein bread flour. Still, Fran did a sterling job of making pizza dough… until we baked it and managed to totally burn the bottom of one. Our oven in Rome similarly had very fierce bottom heat, but Sharon was possibly even worse; never mind any confusion from being faced with ye olde daffy Fahrenheit after years of using nice sane Celsius.

Still, it all went off well. The cake was a hit with Ellis and the kids; the (unburnt) pizza was avidly consumed, with several of the other ex-pats here being very appreciative of a freshly baked bread product; and me and Sharon even managed to make a decent wholewheat tin loaf too.

Oh cripes. Another rambly post. I’m sorry. I’m not sure I’ll get any structure or succinctness back into this site until I’m settled back in England at the end of the year…