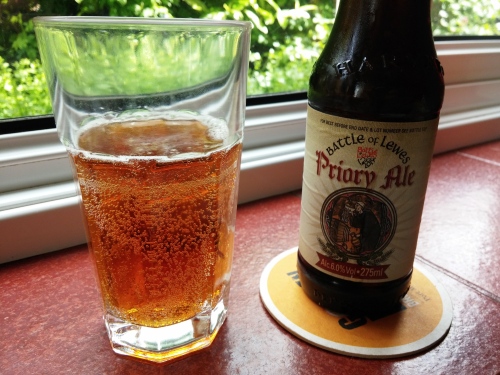 Harveys of Lewes, my local brewery, founded in 1790, has just released a new brew: Priory Ale. Although I drink Harveys Best often in the pub, and I’ve been enjoying working my way through their bottled beers, this is a novelty. The 6% ABV ale has been brewed especially to commemorate the 750th anniversary of the Battle of Lewes, which is being celebrated this weekend.

For those who don’t know their English 13th century history, the Battle of Lewes was a clash between the forces of Simon de Montfort, 6th Earl of Leicester, and those of King Henry III. The royal forces outnumbered those of Simon (10,000 versus 5,000) but he won anyway, and as a result he and his allies were able to force a reduction in the king’s autocratic powers.

The battle for democracy
Although you could see the battle as a squabble between Norman aristocrats, idealists instead couch it as an important step in the journey towards parliamentary democracy in England. That’s certainly the line taken here in Sussex and in Lewes, a town with strong links to the history of democracy. (Thomas Paine lived here for six years before heading to America in 1774, where his writing and philosophies contributed to the American Revolution and helped shape the ensuing nation’s democracy.)

The Priory Ale is the most interesting beer I’ve drunk in a while. Harveys’ head brewer and joint managing director Miles A Jenner and brewer Peter Yartlett have created a fascinating concoction, a kind of historical recreation of a 13th century-style beer. (I love this kind of thing – check out my efforts to make a bread using beer barm, as they would have done for centuries in Britain before yeast became something that could be cultivated in the late 19th century.)

The label says the ale “is brewed using ingredients that were available to the Cluniac Order at the Priory of St Pancras in Lewes in 1264, where a brew house was known to exist.” Which is nice, as we visited the ruins of the priory on Sunday too – or at least all that’s left of it, mostly just the foundations of massive medeival toilet blocks. The rest, including a vast church (128m long internally) was knocked down in Henry VIII’s Dissolution of the Monasteries. Interestingly, Henry employed an Italian engineer – who was presumably a catholic. Surely he must have had his doubts about his path to the afterlife being employed by an excommunicated reformer to knock down catholic houses?

For centuries, the site was used a quarry. Then the Victorians topped the vandalism by ploughing a massive railway cutting through the middle. Much as I love railways, I probably love historical buildings more, or at least am shocked at their mistreatment. I thought we didn’t do that anymore in England – certainly the local authority here is fussing about us building an extension, saying we have to have an archaeologist present. But then my mum and dad, whose house’s foundations are on the Roman walls of the city of Winchester, told me developers up the road were allowed to demolish a stretch of those walls to build some new flats!!!!!! My jaw genuinely dropped when I heard this.

Harveys’ description of the Priory Ale also says, “Fermentable sugars are produced from a mash of barley, oats and wheat prior to being boiled with hops and yarrow to impart bitterness.” Though hops (Humulus lupulus) were not used in British ales in the 13th century. Chatting to Ed Page in the Harveys shop, we concurred on the notion that hops didn’t become commonplace in British brewing until the 16th century, with him saying they probably came over with Flemish workman. He also said these workmen probably invented cricket around the same time too. Ed explained Harveys used hops in the Priory Ale as their modern yeast strains simply couldn’t cope without some of the chemicals provided by the hops, the fermentation wouldn’t work.*

Hops in England
On this question of when hops arrived in Britain, Martyn Cornell gives his usual levels of detail and research into the history of the plant in brewing here. They were being grown in the Netherlands in the 14th century, and “The first import of Low Countries ‘beere’ into England seems to have come in 1362/63”. Though he continues, “However, the first brewer of the hopped drink in England does not appear until 1412.”

He corroborates what I’d been chatting about in the Harveys shop, saying, “The English beer trade seems to have stayed in the hands of immigrants from the Low Countries for the next century, as the conservative-minded natives stuck to their unhopped ale. As a result, the first beer brewers in England apparently imported all their hops from across the Channel, with no attempt to cultivate the plant here until early in the 16th century.” Hop growing in southeast England became established in the middle of the 16th century and had spread to “at least 14 English counties” by 1655.

As for other plants used in brewing, Cornwell says, before hops brewers “had been using a huge range of other plants to flavour their ale in the meanwhile: the bushy, aromatic moorland shrub bog myrtle, for example, the grassland weed yarrow, the hedgerow plant ground-ivy, even rosemary and sage.” He later mentions “bitter hop alternatives such as broom and wormwood”. Harveys are using yarrow (Achillea millefolium) alongside hops in the boil. They do use other herbs for flavouring, though: “The resultant brew is conditioned in vats with ale cost, also known as tansy, rosemary and thyme.”

The Lewes Priory ruins include a wonderful herb garden now, where all these herbs can be found, emulating the site’s original, somewhat larger herb garden.

Strangely, the resulting beer has a somewhat ginger-beery taste, though I would say the thyme (Thymus vulgaris) provides the dominant flavour. Or more likely the thyme essential oil, thymol, which lends a distinctive herbal-antiseptic odour.

What is “ale cost”?
I’d never heard of “ale cost” before, so that got me investigating. A couple of Google book searches specify “alecost”, “ale-cost” or “ale cost” is specifically a name for the herb Tanacetum balsamita, also known as costmary. It’s related to the abovementioned tansy, which is Tanacetum vulgare.

‘Breverton’s Complete Herbal’ (2011), an updating of ‘Culpeper’s Complete Herbal’ (originally published 1653) says, “‘Cost’ refers to costus, a spicy Asian plant related to ginger, which has a slightly similar flavour. … ‘Alecost’ translates into ale-cost or ‘spicy herb for ale’ as it [Tanacetum balsamita] was once an important flavouring of ales.” (Link here.) This is confirmed by the wonderfully titled 1823 ‘Universal Technological Dictionary Or Familiar Explanation of the Terms Used in All Arts and Sciences Containing Definitions Drawn From The Original Writers’, here. The costus in question, also Costi amari radix or costus root, which the costmary or alecost is reminiscent of and partly named after, was apparently an important trade item for the ancient Romans. It’s been identified as a member of the Saussurea genus, S. lappa.Which isn’t related to ginger at all.

So, yes, Harveys, I very much enjoyed your Priory Ale, both as a striking, slightly strange ale and as a historical experiment. And as a stimulant to learn more about random old herbs and plants and the term “ale cost” – which arguably Harveys are using with some poetic brewers’ license.

Oh, and among the info boards at the priory is this one, explaining the sign language used by the monks when eating in their refectory. It doesn’t include the sign for “ale”, surprisingly, as this was of course made at the priory, a hugely important drink and quite possibly somewhat like a murkier version of Harveys’ Priory Ale – but without the hops. Perhaps they just used the same sign we do – imaginary glass held up in front of mouth, hand tilted back and forth slightly.

* Since writing this, I’ve been ruminating about it, and chatting to brewers. I can’t really understand how yeast – which feeds on the sugars in the wort, from the mashed malt – would be affected by the presence, or not, of yeast. I hope to try and ask Ed Page in Harveys to clarify this. Addendum 2: I spoke to Ed again yesterday and he reiterated that their yeast does need a bit of hop in the fermentation. He said they’ve had the same yeast culture for 60 years, so at about 300 brews a year, that’s about 18,000 generations of yeast – and he said it’s become so used to the hop in the mix that while it will still ferment, “it doesn’t function to its best without it”.
Addendum 3 (24 May 2014): So I met Edmund Jenner, son of head brewer Miles Jenner. He’s called “Beer ambassador” on the Harveys site, and is certainly very knowledgebale – as you’d expect from a member of this renowned brewing family. He called their yeast “hop dependent”, explaining they need the alpha acids from the hops “to perform”. For the brew, they use a small amount of Alsace-grown Savinski Goldings hops (which I believe are Styrian Goldings, a Slovenian form of the British Fuggles hop.)
Addedum 4 (7 June 2014): Ran into Edmund again, and he said that although he’d talked about hop dependency of yeast at Brewlab, when he mentioned it to the brewing team at Harveys they weren’t convinced. So now I’m confused. Again. Ed says he’ll look into it further and I’m sure we’ll discuss it further next time we meet.