I know it has absolutely nothing to do with bread, cakes or ale, but I was really excited to hear that an apple press was being set up for two weekends of Lewes OctoberFeast (which is actually more of a SeptemberFeast). People could collect their own apples, or their neighbours’, or apples from wild trees, or whatever, and bring them along to be made into juice.

When we moved back into our house in Lewes at the end of December 2013, one of our two old apple trees had produced loads of fruit, which was all lying rotting on the ground. It drives me mad to think our tenants were probably buying apples shipped from New Zealand or South Africa – or even France – while ones went to waste in their garden.

I vowed to utilise them this year, but the ripening has coincided with out period of no kitchen (10 and half weeks and counting), so I couldn’t make any chutney; instead, we gathered a small backpack full and took them to John Downie’s press in the Market Tower. Which was disappointingly quiet – considering how many other apple trees I see being neglected, and considering how much effort those running it go to, it should have been thronged. Quite possibly  it wasn’t publicised enough.

Afterwards, we wandered off in the direction of the Street Food Feast, taking place in the yard of Harveys brewery, picking up some bread en-route at Flint Owl, one of the two great real bread places that opened up in Lewes during our two years away in Rome. 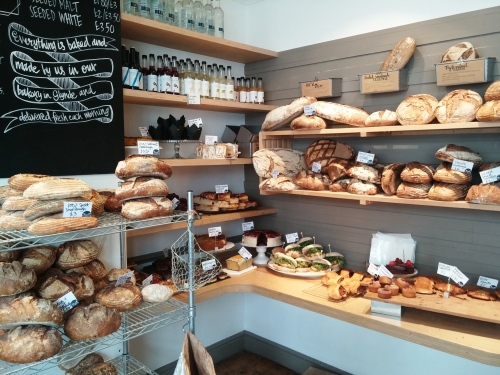 Much as I’m missing home baking, I’m enjoying the excuse to try the locally baked breads.

The street food feast was a lovely event. Harveys had their beer wagon set up, a chap was playing a lute (or somesuch exotic instrument) and people were sitting around on beer crates enjoying the wares.

We had some pizzas from the mobile oven of The Hearth, the excellent Lewes pizzeria and bakehouse. 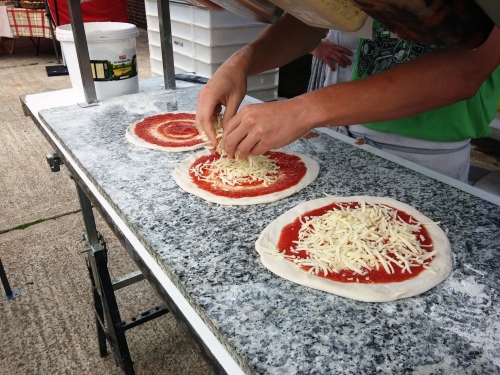 Lewes isn’t a great place for restaurants – there are very few, and they’re mostly not great for buon rapporto prezzo qualita (“good balance between price and quality”, ie value for money). Lewes is more a pub town. Indeed, it’s an excellent pub town, but while some of them do decent pub food, those tend to be the ones that don’t necessarily do the best beer. Gah! And, weirdly, for a small town, we have every single rubbish pizza chain you can think off – so The Hearth is a real relief, especially after moving home from Italy.

The restaurant above the bus station has a wood-fired oven, but owner Michael Hanson honed his skills with his mobile rig at festivals. And here it was in the Harveys yard yesterday being ably driven by big-haired Big Pat. 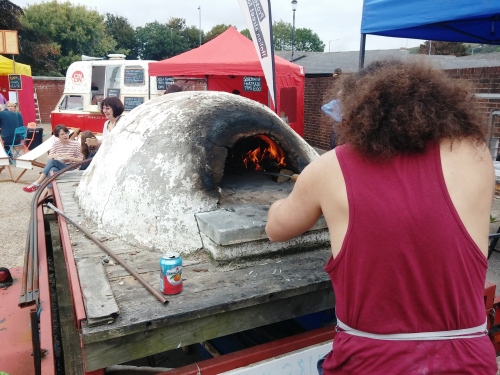 Now, I must say I prefer cubed mozzarella blocks to this pre-grated stuff, but I imagine Michael uses it for the mobile set-up as it’s a lot easier. (They use both, as well as mozzarella di bufala, in the restaurant.)

After the pizzas we also had to head for a truck called Spade and Spoon, as the carnaholic Fran had spied it did pulled beef, slowed cooked in Harveys ale. This looked like just my sort of place too, as they had an emphasis on good provenance. I’m sick to the eye teeth of pubs saying “we use seasonal and local food” then having menus clearly based on imported produce or stuff from cash and carries. Spade and Spoon looked more credible though, thankfully.

This is where things got a bit strange. Not the very slow-moving queue, which was just boring. I mean the fact that the night before I’d been to a gig in Brighton featuring my very talented friend Angeline Morrison*, who I’ve known since the early 1990s. When Fran got to the front of the Spade and Spoon queue to help carry our pulled beef in buns, chicken wrap and beetroot burger back to our other chums, the guy making my burger said “Dan!”. I looked up and said, “Dan!” This was another old friend from the same period when I met Angeline – indeed, Angeline may well have broken up with me then gone out with Other Dan. I’d not seen Dan for about 15 years, and hadn’t seen Angeline for about five either, so it was a strange coincidence.

Dan’s beetroot burger was very good too. Though I think he perhaps need to employ one more, faster chef in his food truck.

Afterwards all this gorging on the savouries, and shock of the coincidence, we perused the sweets. Now, as much as I like a good honest British sponge cake, I would say there were a few too many at this event. We did, however, find one lady doing delicious chocolate hazel-nut meringues, which just hit that desert spot, thanks very much.

*Here’s a classic track from Angeline:

Here’s some more of her stuff on Soundcloud, plus look out for the upcoming album of her new outfit, The Mighty Sceptres.