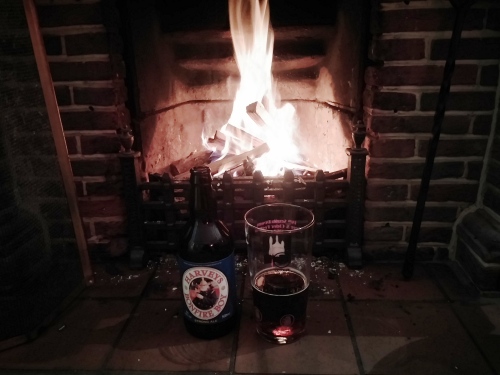 It’s been a busy week here on the building site, so escaping the frenzied activity of plasterers, plumbers, window fitters and carpenters this morning I went into town – and had to visit the Harveys brewery shop, as their famed Bonfire Boy had just appeared. In fact it was bottled just this morning, the batch prepared to accompany the annual Bonfire Night, aka Guy Fawkes Night, celebrations, 5th November. They didn’t even have a button set up on their till, so I reckon I was the first customer to buy it.

Since I was a kid in the 1970s, when we used to run through the embers of the massive fire on the site of Oram’s Arbor in Winchester, Bonfire Night has become a sorry, much diminished thing in many parts of the country, local council regulations banning the actual bonfire in many places. It’s pathetic. What’s Bonfire Night without a bonfire? Luckily, Lewes is the world capital of Bonfire Night. It’s a very, very serious business here, with neighbourhood Bonfire Societies, dressed in colour-coded striped Guernseys, white trousers and various themed costumes, holding their own processions, burning barrel races, fireworks displays and bonfires in a continuation of traditions that date back to the 17th century, or earlier.

The Lewes Bonfire historian – with whom I share a surname – Jim Etherington says “Any account of what form 5th November celebrations in Lewes took in the years immediately following the discovery of the Gunpowder Plot in 1605 remains conjecture” but writes about solid accounts from the year 1679. “The rolling of blazing tar barrels through the High Street is recorded for the first time” in 1832. Years of tension between the Bonfire Boys and local authorities continued until the Bonfire Societies began to form in the late 1840s, giving the anarchy some organisational tethers. As with many British folk traditions, consolidation and honing took place in the Victorian era, and over the intervening decades the events have become world famous – with a reported 80,000 people sometimes packing the town, which normally has a population of around 15,000. 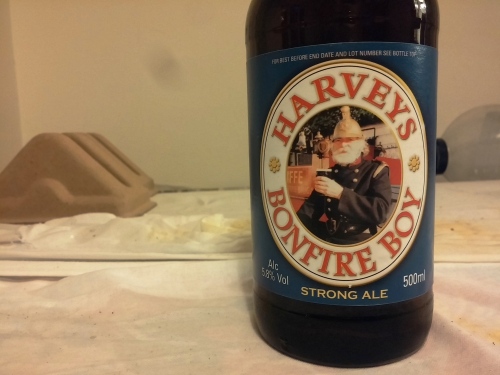 Harveys first brewed Bonfire Boy in 1996. It was then called Firecracker, and commemorated the work of the fire brigade and their work fighting a blaze at the brewery in July of that year, but it subsequently became the annual Bonfire Night brew.

It’s a delicious beer, a dark amber colour, very little head and an aroma of apples and toffee – appropriately enough, given that toffee apples (aka candy apples in American) are for many Brits a treat closely associated with Halloween and Bonfire Night, both arguably modern incarnations of the Celtic Samhain. The beer also has a taste of apple and toffee, along with a deep maltiness, like well-baked bread or warming porridge with golden syrup, and hints of Prunus genus fruits like cherry and plum. It’s a smooth, full-bodied beer, confident in its 5.8% strength. It’s one of those beers that feels really substantial when you roll it around in your mouth, almost like eating an autumnal stew followed by a hot fruit pudding.

I’m looking forward to having a few more come The Glorious Fifth. 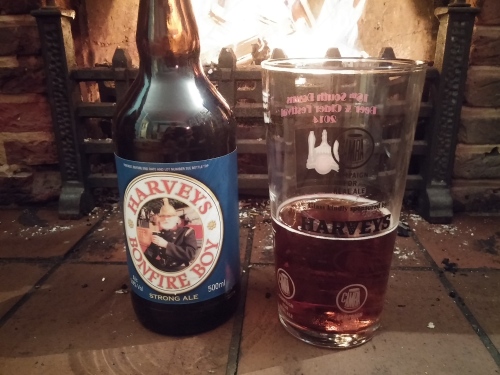