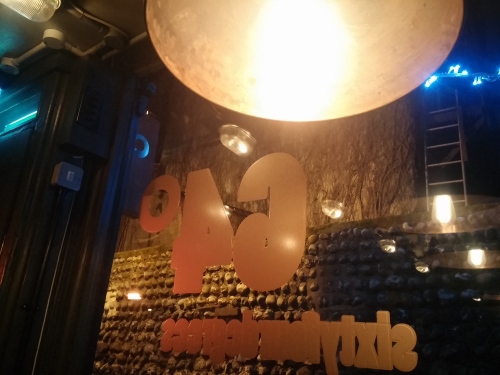 We booked a table at 64 Degrees in Brighton ages ago. This 27-seat resturant opened in October 2013, but it’s taken us a while to get there. When we did, it started pretty well. They had a couple of beers from the innovative Wild Beer Co and I ordered their Madness IPA, thinking its hoppiness would be a good way of cleansing the palette between dishes. It was. It was so hoppy, and frankly American in style, I’d call it an APA. So while it’s not Wild Beer Co’s most interesting, it was a perfect accompaniment to what followed. Dishes. A lot of dishes.

The music is loud, the place is cramped, and I couldn’t quite hear the waitress. I beleive she suggested we should order three or four of the plates each as they’re small. Some are small – like the superb, delicate scallops with lemongrass and seaweed kale – but others are pretty substantial. The anchovies – crisp giants offset by gochujang – came by the dozen, while the venison balls were the size of golf balls, pretty dense and served on brioche, making for a hefty dish. 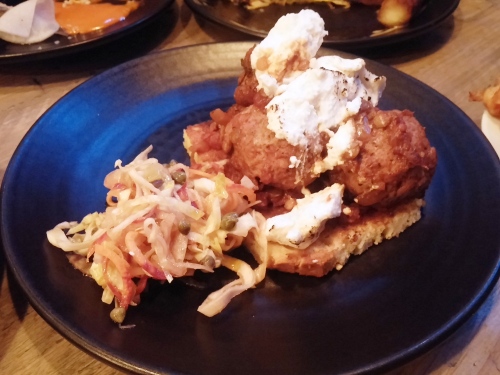 The result – we ordered too much and it slightly marred the experience. It also meant I couldn’t justify ordered the “Chocolate, hazelnut, hot & cold” for dessert, dammit! Never mind the fact that, along with Silo, 64 Degrees seems to be the most interesting food place in Brighton at the moment.

Anway, I cannot stand wasting food – I’d go so far as to say it was criminal. It takes a lot of energy to cultivate, transport and process fruit, vegetables, grain and particularly meat and fish, even when, as with 64 Degrees, the emphasis is on local produce. And we in an era when climate change having a significant impact on our civilisation, we need to think carefully about energy use.

Every time you throw food away you really should consider the repucussions: ethical, environmental and even financial (it costs a lot to shift stuff to the landfill. Never mind the fact that you’ve paid for the meal anyway).

So there I was trying to hoover up anything left by my companions. And I ate too much, and I felt a bit ill –  both inbody and in conscience. Which isn’t a great way to end a meal, especially an expensive meal I’d been looking forward to. 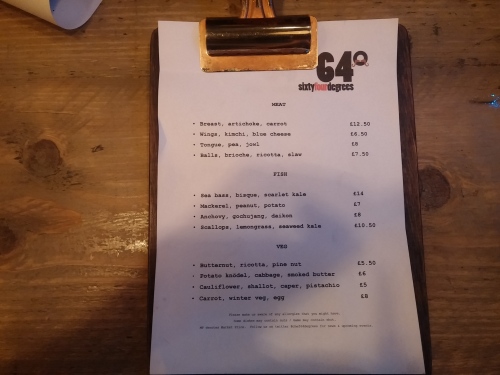 So I want to return to 64 Degrees: I like their menu, I just need to order more carefully. In the meantime, I think they need to do a bit of calibration of their portions, and when the waiting staff are talking you through the menu, they need to be honest about the difference between a fairly small plate of mackerel and a massive pile of potato knödel. These dishes are not tapas. I didn’t get the impression you could order as you go along. So if you’re going to order it all at the start, it’d be good know how much is enough.