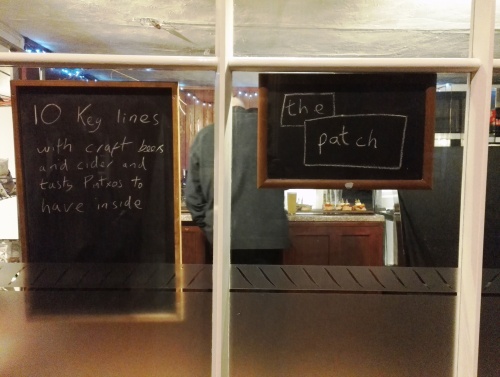 Anyone who knows Lewes, the county town of East Sussex, will know it’s a good beer town. Historically it’s had a dozen or so breweries, though now there’s just the stately Harvey’s left. It’s also had dozens of pubs, many of which have fallen by the wayside over the years and continue to do so, with the recent closures of The Crown Inn at the top of School Hill and the Trevor, over the hill at Glynde. So I’m pleased to report the opening of a new venue: The Patch, which has taken over the unit formerly occupied by Fillers sandwich bar opposite the Market Tower.

Lewes is a great town if you like more traditional beers, if you’re of a CAMRA bent and favour cask bitters and suchlike. Indeed, you can get some great, well-kept cask beers from several venues around town: notably The John Harvey Tavern (Harvey’s tap room), the Brewers, the Gardeners. But while the Snowdrop and even the Elephant & Castle have long offered a reasonably varied selection, the town hasn’t had a venue dedicated to craft beers.

I don’t like this traditional vs craft distinction but for convenience I’m considering craft beers as those from smaller breweries using more modern blends of hops (from the US West Coast and the Antipodes) and playing around with different yeasts, wild yeasts, fruits and other adjuncts, and aging in wine barrels. Like Burning Sky in the nearby village of Firle. I had a few bottles of theirs over Christmas, and Les Amis du Brassage, a collaboration with Fork Brewing in Wellington, NZ, featured rooibos tea, pink peppercorns, rosehips and not just malted barley but also wheat and oats. Not exactly traditional brewing. (BTW, I enjoyed some other Fork beers when we were in Wellington a few – or five – years ago.)

Patch, owner of The Patch, has a long relationship with Burning Sky, and in his opening line-up on his 10 keg taps, two are Burning Sky. He also has two from another Sussex brewery, Gun, as well as one from Wild Beer Co (Somerset), one Beavertown (London) and two from Wild Weather Ales (Berkshire). “The first line up is crowd-pleasing,” says Patch, and it certainly pleased me, as it’s always fun to try Wild Beer, Burning Sky is a local favourite, and Beavertown’s Gamma Ray is the quintessence of English craft beer from the past half-decade or so, a big, feisty APA replete with fab sci-fi artwork.

Patch says he plans to rotate the beers, and is sticking with kegs. This may horrify some – but it’s not like they don’t have plenty of other options in Lewes. And Patch has good reasons. One is wastage, “Particularly wastage,” he says. “Cask has a very short shelf life.” His second reason is more personal.  “To be honest, all my favourite beers are kegs,” he says, adding “I think brewers are putting their most interesting beers out on keg.” Kegging is simply a more viable option for young, smaller breweries, and it’s such outfits who tend to be more experimental.

I started with Wild Beer’s Pogo, which is one of those slightly dangerous brews that tastes like some kind of citrusy soft drink, though thankfully it’s only 4.1%. It’s a pale ale that has added passion-fruit, orange and guava. Adding fruit can make beers a bit sickly; an award-winner at the Great British Beer Festival a few years ago made with apricot juice still makes me feel a bit queasy. Thankfully this is finely done.

Next I had a Vermont Pale from Gun, a 4.4% New England style pale made with malted oats and wheat. It’s neither too sweet nor too bitter, despite a lot of hopping. It was OK, but a bit eclipsed by the boldness of the other beers I tried.

Drinking with my friend Alex Larman, things started to get a bit muddled as he has twice my capacity, but I also had Gamma Ray then a Curse of Threepwood from Wild Weather, a pleasingly sour 5% experience made with rhubarb and hibiscus. Love a bit of hibiscus. Had one on our balcony in Rome. I also sampled Burning Sky’s 7% Pretty Mess, another big, fruity experience.

Patch has taken years to bring this project to fruition, and I met him in his previous guise at the Snowdrop. His taste isn’t exactly in line with mine but I’m happy to report that everything we tried was good, well kept, at a good temperature, and featured some fun fruitiness and sourness. All good cheering beers for post-Christmas, the arse-end of the year in England.

Anyway, Patch says he’s been trying to get a project underway for about two years. He hoped to open at Bonfire, but things only fell into place around Christmas. He continues to use the existing facilities of Fillers, and indeed will operate as a sandwich takeaway and daytime café, as well as offering pintxos ­– the Basque equivalent of tapas – on Friday and Saturday evenings. We tried some pintxos, snacks where a topping is pinned to a slice of baguette with is cocktail stick, and they were good. I especially enjoyed the deep-fried mackerel balls with a dill dressing. It’s quite ambitious but hopefully the combination of services – snacky lunches for nearby workers and tourists, quality beers for drinkers – will take off. Bit by bit he’ll tweak the venue, starting with a “proper bar” that’ll hopefully go in this month, January 2018. I look forward to my next visit. Though I do need to work out a better rounds system with Mr Larman.