The Last of New Zealand

The past week or so we’ve had a great time catching up and hanging out with old friends. Hence a bit of slackness on the blog. Plus, well, I’m aware this has really become a beer blog the past few months, and I’m slightly sick of the sound of my own (typed) voice on this subject.

That said, we’ve finally left NZ, so I wanted to write up some final thoughts on NZ craft beer, and in some ways retract some of what I said earlier.

I won’t be talking about bread and cake, though I’ve really enjoyed the baked goods of Bread and Butter, a small chain of real bakers in Auckland. Great breads, and I came to crave their almond croissants the last few days I was in town.

Strident ales
I’ll say straight away that in our final days in NZ, we finally drank some beers that had a lot of assertive hoppy character, something I’d started to begin to think didn’t exist in the craft beer scene there. Specifically, we went to a few places in Auckland that I wish I’d known about when we’d been there five weeks earlier. These places were recommended by the very genial Simon Nicholas of Hop Federation, one of the last breweries we visited on the South Island.

Simon was the head brewer at Hallertau, the Auckland brewery whose beers we’d enjoyed at The Golden Dawn on Ponsonby Road. He had recently relocated to the South Island, buying up the former Monkey Wizard microbrewery in Riwaka, outside Motueka in Tasman.

This small operation was previously run as a hobby by an English dentist, so Simon was in the midst of transforming the place into a full-time serious operation, and was also in the midst of tinkering with the beers he was developing. It was a really pleasure to chat with him and enjoy the beers he kept saying he was still “mucking about with”. Frankly, they were all superb already, but I’ll be interested to go back when he’s satisfied with them. (Or, ideally, find a few bottles at a decent beer pub in Britain, like London’s Cask Pub & Kitchen.)

His Red IPA was his biggest success so far, and it was delicious. He called it a “bit of a muck about”, but this lovely dark amber beer is sharp and resiny smelling, and has a great balanced taste from dry hopping with Simcoe and Cascade hops and mellowing it with Gladfield malt from Canterbury. 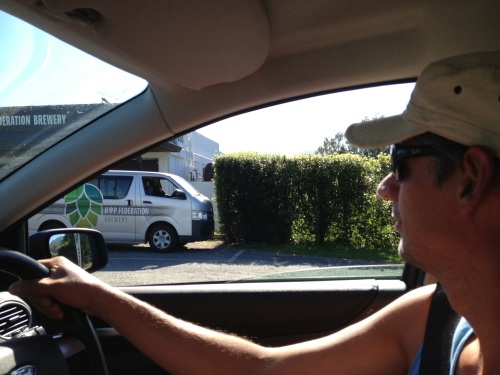 Hop shortage
He said he wanted to make it with exclusively NZ hops, but they just weren’t available – indeed, he explained despite the Motueka area’s fame for hop-growing (something that was affirmed in a mid-19th century painting we saw in the Nelson museum), half a decade or so ago many were pulled out and replaced with jazz apple orchards. Just when NZ hops were becoming even more in demand in the international craft brewing scene. Ooops.

“There’s a worldwide hop shortage for our hops – it’s a real shame,” he said. Furthermore, as hops are all centrally controlled in NZ, it’s not even possible to grow your own adjacent to your brewery.

Before leaving the South Island we visited Bays Brewery near Nelson Airport, which was more traditional than craft (for example, they pasteurise and filter, like McCashin’s; Simon wrinkled his nose at the very idea of this. Indeed, why make a product that’s carbonated by an organism then kill that organism?) and Golden Bear in Mapua. 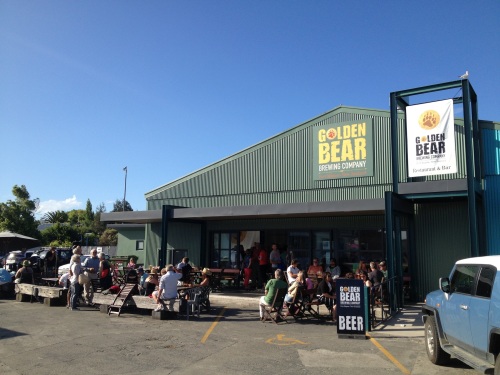 The latter has an American brewer, so I was intrigued to chat with them, as US craft beer tastes seem very unlike those of NZ, but when we arrived on a beautiful summer evening, there was a gig and a lively crowd in their brewpub, so that wasn’t really on the cards. Their Seismic IPA wasn’t bad though. 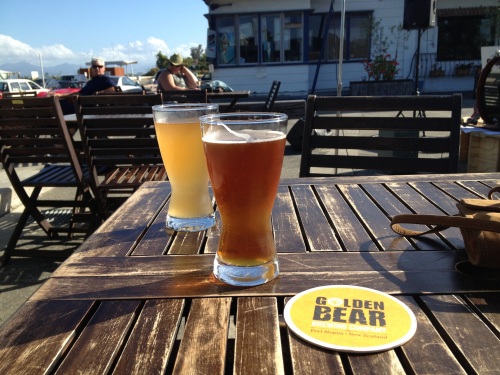 Though TBH, I enjoyed a bit of the Mussel Inn’s Captain Cooker manuka at the café just over the yard from the brewery more. That was one the few beers I mentioned on my old blog during our previous visit to NZ back in 2007.

Back in the big sprawl
So yes, Auckland. When we got back, we first had a few days staying at the Piha bach (Kiwi English for holiday home) of our friends Jude and Roger. I bought a few beers to take with me, and was tricked by yet more “faux craft” branding. This was Hancock & Co, whose branding emphasised a whole yarn dating back to the mid-19th century; in reality, the brand is actually new, created by an off-license chain and exploiting some NZ brewing heritage. (See here.)

This wasn’t a trap one could fall into at Brothers Beer though. This was the place recommended by Simon: a small brewery close to the town centre in a funky development called City Works Depot.

The brewery has been in operation for about a year, according to the slightly unfriendly girl serving, whose too-cool-for-school attitude contrasted with the friendliness of most of the brewery folk we met on our South Island road trip (3095km – god help me. There go the last tatters of my green credentials when combined with all these aviation crimes). 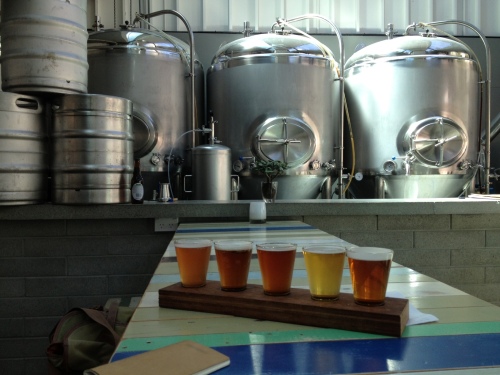 She warmed up a bit when we got chatting more about beer. We had a tastling padddle of five of their brews. Alongside their own beers – brewed, with a cloud of malty mashy odours, right there – they had some representation from other breweries, like Yeastie Boys (based in Wellington). The venue also has some slightly sagging shelves laden with bottles of genuine craft beer – so no Hancock’s, Boundary Road or Founders and plenty of Mike’s, Parrot Dog, Townsend’s, Invercargill Brewery and 8 Wired etc, and even some overseas stuff like Speakeasy, which we’d had in its native San Francisco.

Brothers’ beers proved something of a relief and a revelation. When we were in Auckland before, other than Hallertau at The Golden Dawn, we’d struggled to find any decent craft beer on tap. Here, though, was a brilliant selection – and not only that, some of them were fantastically dry and bitter, displacing our experiences of so many mild-mannered, she’ll-be-right malty lagers and under-hopped ostensible IPAs. Yay. Flipping yay.

So their El Dorado IPA (6.7%) came with a scent of ginger and lemon, and a big-bodied taste of hoppiness, and a dry mouthfeel. Their Aramis pale ale (5.3%) had a smell and taste that was both minerally and yeasty, reminiscent of Marmite, along with a bitter-sweet balance of hop and malts. Surprisingly, the one we liked best was their Gronholm Imperial Pils (8%). I’m really not a fan of lagers, pils and pilsners generally but this was a really complex beer. Fran said, its odour was of “something very green – peas? Smells amazing.” I got grapefruit and a real astringency akin to tea tree or eucalyptus essential oils. Fran also said it had a “Strong male sweat thing”, which might sound off-putting, but it really worked. Big, bitter and delicious.

Though I’d still say their taps are pouring a little cold. And they need some hand pumps.

The latter we found at our next Auckland port of call, another recommendation from Simon: Vulture’s Lane, a pub on Vulcan Lane, just off the unprepossessing Queen Street in downtown Auckland. Why didn’t I find this place before?! Guidebooks and Google both failed me. 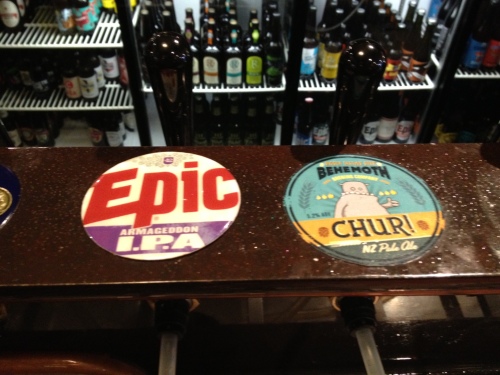 They had a great selection, including yet more breweries I’d not even heard of before: like Hot Water Brewing Co, a new outfit in the Coromandel (close to the famed, freaky Hot Water Beach) and Behemoth Brewing Company. We had a golden ale from each, Golden Steamer Ale and Chur. I had to have the latter as the label was cool; it was delicious too, even, crisp and fresh, sweet, bit of hop, resin. A really nice, balanced summer ale.

Finally and farewell
My final few bottles of NZ beer before our departure were a Taranaki Pale Ale, from Mike’s, which Kelly at Green Man in Dunedin had mentioned as NZ’s only other organic brewery currently, and Scallywag Rich Amber Ale, from Schipper’s, in Auckland.

The latter I had to buy as it had another cool label that not only reflected the great dog company we’ve had on this trip (notably, in a bit of utterly coincidental alliteration, from Baxter, Bandit and Betty) but even listed all the hop varieties, malts and even the yeast used in the brew – what an excellent touch, for an excellent beer, a sweet, deep, rich, crisp ruddy brew that’s not unlike Hop Federation’s Red IPA.

Now we’ve gone I wish I’d had more time, and more prior knowledge, and someone to share the driving with.

We’re in Singapore now, enjoying the monsoon, and having a day off the booze to help with the jetlag. Though I do hope to get to Brewerkz and Red Dot (Reddot?) before we head on home to Blighty for Christmas.