Only With Love new brews news 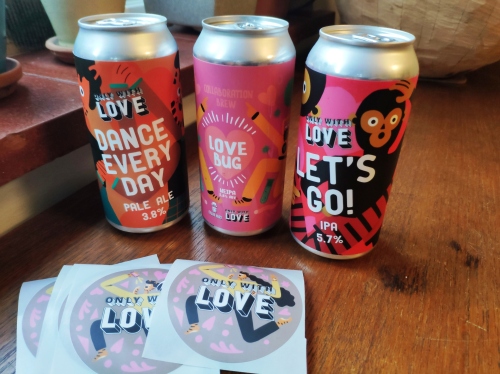 Anyone with a keen eye for British craft beer will recognise the design style of these new beers from Only With Love. It’s by Billy Mather, the illustrator who also played a key role in the branding of Holler, previously Holler Boys, the now subsumed brewery I covered here and here. The founder and brewer of Holler was Steve Keegan, previously of Late Knights in south London. Late Knights and Holler were both purveyors of very fine beer, so I was very excited to get a ring on the doorbell just now and a delivery from Roger Warner, Steve’s partner in new brewery operation Only With Love, which launched this week.

With the plague and the Brexit shambles it’s been a grim year but somehow the brewers in this neck of the woods – in and around Lewes, the county town of East Sussex, in the south of England – have been bucking the trend of social and ecomonic freefall. Not only did Danny Tapper successfully launch The Beak brewery and taproom back in August but now we’ve got Only With Love, who are offering not only fine beer but also kombucha, that mystery drink fermented from a jellyfish-like SCOBY (symbiotic culture of bacteria and yeast) growing in a sweet tea mix.

Futhermore, another great local brewing operation, Abyss, have just successfully crowdfunded to get started on a new taproom with Mexican streetfood that’s not only in Lewes, but even in my part of town, somewhere that’s been sorely lacking in drinking options since traffic-based restructuring of the town killed off its pubs and, more recently, the working men’s club. It’s really exciting, as frankly, the past few years in Lewes it’s felt like developers have been killing all the opportunities for artisans, creatives and small businesses by snapping up all the available spaces and turning them into unaffordable housing, with not a jot of thought for the shape of the community.

Anyway, I was planning to get to Only With Love for a brewery visit and proper write-up, but was hit by a vile snot-cold at the start of the week. And in this era, no one wants you sharing your germs with them, especially in a brewery – a place of carefully managed microbial activitiy – during its launch week. I’ll hopefully get there soon, so watch this space.

During lockdown and the plague year in general, I’ve been trying not to have any booze on weekdays, but I may have to crack open some Only With Love tonight.