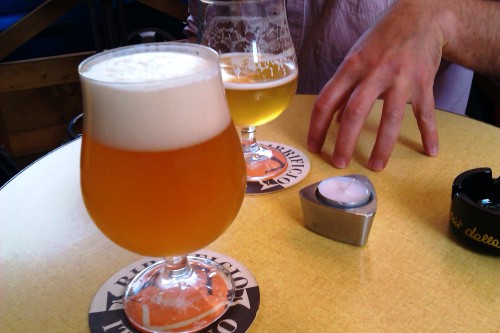 My friend Giammarco, teacher, novelist, ghost writer for academics (!), doesn’t much like beer, certainly not proper beer. He’s the sort of guy who’s satisfied with the axis of industrial yuck that is Peroni/Morretti/Menabrea. So I was quite surprised when we met up for drink in Nomentana, a neighbourhood northeast of Termini station and just outside the Aurelian Walls, and he suggested a nearby birreria (beer bar). A new birreria? Come no!

It proved to be an interesting stroll. I already knew the main drags through Nomentana but had never really explored the backstreets. We didn’t exactly explore, but just strolled through. Giammarco dove into a second-hand bookshop where he got a pristine novel for a mere Euro (a book like that would sell for about £5, €6, in the UK). It’s a shame I can’t really read idiomatic Italian… what bargains. We strolled on, past the old Peroni factory, built in 1908-1922. Production stopped there in 1971. 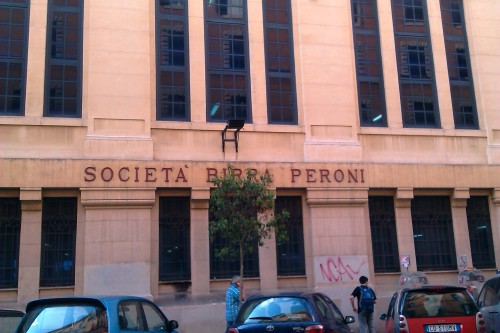 Apparently the building is being converted into a giant birreria. According to Giammarco. Though it being Roma, even if that is on the cards, it may take 10 years and several changes of local government for it to actually fall into place. Indeed, this site (in Italian) says it was going to be converted into a centre for arts documentation and a cinema, so who knows what’ll happen to the redevelopment plan. Like Battersea Power Station, some developer will probably just get his way to turn it into expensive apartments in the end.

We then passed by the Mercato Nomentano di Piazza Alessandria, a very handsome building with grandly arched entrances and looming pediments. The market was built in 1926 in what Giammarco called a “Liberty” style – that is art nouveau – and inaugurated in 1929. I’m no architectural historian, but it looks more art deco to me, or at least from a kind of transitional style. Check out this old pic from 1940. 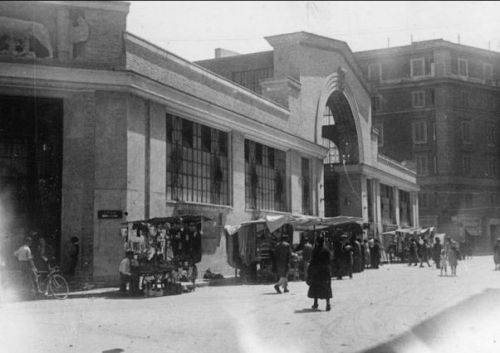 After a worrying moment where it looked like Giammaroc couldn’t remember the location of the birreria we were looking for, Kombeer, we finally found it…. Closed. It was 5.45pm. This always bemuses me as a Brit because our drinking culture is so much about leaving work and going straight to the pub. Go to any British city and if you’re in an area dense with offices, come 5.30pm, the pubs will like as not be chockablock with people loosening their ties (poor bastards) and forgoing any proper solid food.

We malingered a bit while the Kombeer staff swept up and laid out seating in their little patio area among the parked cars. Before too long we were seated and the waitress came to discuss the beers. Which is all very nice in a hands-on kind of way, but not great is you speak bad (or no) Italian. And not ideal if you’re not acquainted with Italian birre artigianale – which dominate the options here, though there we also some international craft beers, both bottled and alla spina (on tap).

Although I speak some Italian and know some of the breweries and beers, I really didn’t follow… my brain doesn’t work so well when it comes to, like, remembering stuff, so in the absence of a menu I went to the bar to check out the taps. There are about eight, with the sort of temporarily attached labels that indicate regular rotation of new beers. The waitress let me try a few beers, which is always a good sign, and I chose a New Morning (English site) as I remember enjoying it elsewhere many months ago.

New Morning (or Nuova Mattina, depending on which batch you get) is a saison-style beer from Birrificio del Ducato, northwest of Parma in the Emilia Romagna region of northern Italy. This award-winning brewery was founded in 2007 by Giovanni Campari. Their own site calls this food science and technology graduate and former home brewer a “radical and visionary Brewmaster” and certainly the beers of theirs I’ve tried ­– Verdi Imperial Stout, Sally Brown ­– have been tasty and interesting, so fair dues.

Anyway, I wasn’t familiar with saison beers before coming to Rome – heck, I’m the first to say I’m an enthusiast not an expert. But from the saisons I have tried, it’s a pretty diverse style (genre?) of beer, though it’s generally defined by fruity flavours, with varying degrees of spiciness and hoppiness and minimal maltiness.

New Morning itself was, at first taste, fairly hoppy, but when a full glass arrived, replete with substantial but quickly subsiding head, the complexity of flavour quickly amended this sensation, with definite spiciness and floral notes. This is unsurprisingly, given that the beer’s made with “wild flowers, chamomile, coriander, green peppercorn and ginger.” My questions for Mr Campari would be – what wild flowers?

Still, such a nagging query didn’t undermine my enjoyment. In fact, while Giammarco sipped one, taking an age with his aperitivo in true Italian style and mourning the rigid state of Italian culture, I – in true British style – went back inside to ask for another. Hey, it’s only 5%. The bar, which is funky in an easy-going way, was still empty at 7.30pm. Which struck me as strange, especially as the neighbouring pizzerias were filling up with the local bourgeoisie. Maybe Kombeer gets rammed later in the evening. I’ll have to re-visit at some stage. Sheesh, so many beer bars to visit, so many birre artigianale to try.

Oh, and apparently Campari named the brew after the 1970 Bob Dylan song.