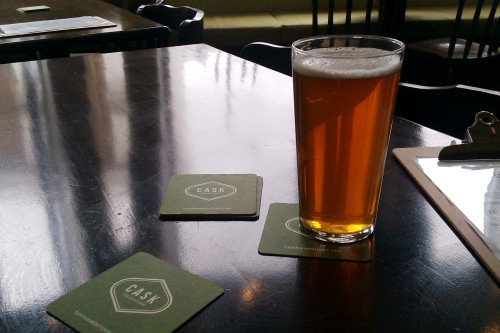 The reason I went to Britain last week was the get a new passport. The UK embassy in Rome no longer has passport renewal facilities (though they do quite a pleasant Guy Fawkes party) and there was no way I could get it in the post as I don’t have any official documents for my address in Rome. Ergo, I did my bit for climate change and joined the budget airline masses.

The passport offices are located just near Victoria station in London. As I assumed some hanging about would be involved, I hunted about online for a suitable place to get some lunch – and have some real beer. A search presented me with the Cask Pub & Kitchen in Pimlico, a five minute walk from the passport office.

Although I lived in London for around 15 years, I left a few years ago. It’s amazing how fast things change there. Not only is there now an acre-wide hole in the ground right beside Victoria, but there are several new breweries and real beer joints too. Although the Cask opened back in 2009, this was my first visit.

Despite being surrounded by handsome Victorian housing stock, the pub itself stands out as it’s located in a 1970s red brick building on a corner. Inside, it’s fairly spacious and uncluttered, with a long bar and several fridges. It’s the sort of place that can cater to all beer requirements, having bottled beers, keg beers and hand-pumped cask beers.

When I visited several of the taps were dedicated to Tyne Bank Brewery, which is located… on the banks of the Tyne, no less, in Newcastle. The friendly, helpful barman said they do “meet the brewer” events, and where many pubs have a guest beer, the Cask has guest breweries. Tyne Bank is a microbrewery producing “60 barrels or 17,000 pints per week”.1

The Cask site says “All our hand pumps serve nothing but the absolute best ale available from the UK’s top micro-breweries.” The keg taps, meanwhile, offer a more international selection; ditto the bottled beer, with the site modestly claiming “We have a staggering collection unrivalled anywhere else in the UK.” They didn’t have any Italian craft beers at the time though! Not that I wanted to drink any. I’m always keen to eat and drinklocal produce as much as possible, though in this case I was keen to sample Tyne Bank’s wares. It may not be local to London, but I used to live in Newcastle so it at least had a personal connection.

My beer tastes are pretty broad so I tried a few things, and discussed the (innumerable) options with the barman. It was a fairly warm-ish summer-ish day, so I went for the Pacifica Pale, a golden ale.

This was one of those very unchallenging beers. I probably should have gone for something a little more interesting, but as I was having a burger too I guess an uncomplicated golden ale was a nice accompaniment. The beer had a fruity, honey-ish smell, minimal head and low carbonation. The colour was dark gold, and slightly misty. The taste itself was easy and even, an undemanding mix of sweetness and mellow hoppiness. Tyne Bank’s site says it uses four different hops, but I can’t say it made it especially distinctive. Pleasant, but not distinctive.

After I’d eaten and finished the pint, I chatted some more the barman and tried a few one. Certainly more distinctive was another Tyne Bank brew – Tropical Haze. This one’s a festival wheat beer – made with mango puree. This gives it a notable sharpness. Which probably wouldn’t have gone as well with my burger.

All in all, I really liked the Cask, it was friendly, practical and unpretentious. Though next time I might ask them for a more challenging pint. And a fork. They don’t seem to serve their food with forks. What’s that about? Some kind of phobia?