Not living in Brighton, I’m sometimes a little late to the party when new venues open. Not too late though – Silo opened in early October and I made it there yesterday. Apparently Fran was going to send me this Guardian article a while back, but forgot. So thanks to Rosie Swaffer for a reminder via her blog.

This is really my kind of place, but perhaps because it’s so in line with the sorts of food issues I’m interested in – such as non-industrial food, which they call “pre-industrial” – it makes me particularly critical. When I sat waiting for my food, which was slow-ish for an urban weekday lunchtime, I nitpicked. But most of the nitpicking in my notepad feels irrelevant now. The main criticism that lingers is how they use jars for drinks. Jars are for storage, they have lips and awkward necks. For drinks you need glasses and cups. I don’t think providing the right piece of kit for activity in question is a big compromise to the venue’s ardent principles. After all, they do give you knives and forks, not twigs or bits of pipe. 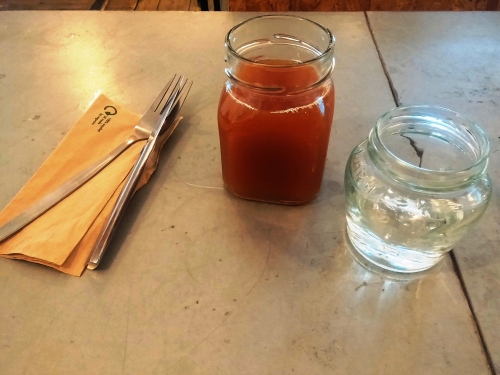 But yes, Silo is a very principled place. Its founder and chef, Douglas McMaster, has tried to create a venue that overcomes much of that most monstrous of crimes in modern life: our wastefulness.

We are a shocking species. The garbage, much of it plastics, we produce and liberally sprinkle all over the environment is shameful. Last night was Bonfire Night here in Lewes, and while it was spectacular, and a wonderful traditional celebration, early this morning the town looked like a landfill site, thick with single use food and drink packaging. It’s truly horrible. How many tonnes of crap did the fiery party produce?

Modern society squanders resources like they’re going out of fashion, and restaurants are no exception. Indeed, they’re particularly bad, with food generally a commodity that’s both over-packaged and overly energy reliant. So it’s not just physical waste, food involves vast amounts of wasted energy too. McMaster is trying to tackle all this head on. Interestingly, a photographic exhibition in Lewes railway station features another café-restaurant that has a zero-waste policy – but it’s in the US. Silo may well be Britain’s first. Bravo.

Silo’s intentions greet you as you enter in a chalked up “mission statement”. As much as I dislike this kind of American corporate terminology, I wholehearted agree with the message of this one. 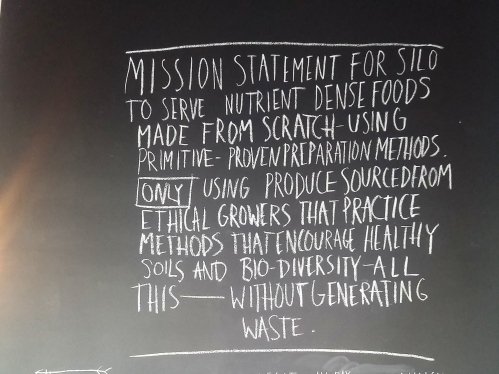 Of course, good intentions are all very well, but a restaurant is always going to be about the food, and the taste. Luckily, Silo comes through ably on this front, or at least it did on the strength of the lunch I had.

I really like the menu – it’s not overlong, indicating an emphasis on what’s in season, or available locally, or available at a reasonable energy cost. McMaster makes a point of serving the food and engaging with clients, and as I had both a chunk of their delicious bread, made from grain ground on site, and a risotto, I asked him about the source of their grains, as rice isn’t exactly a British crop. 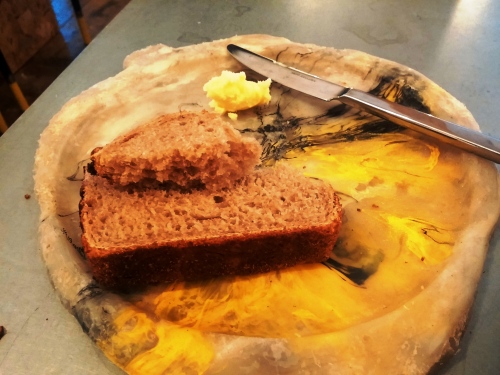 He says that while utilising local produce as much as possible is important, it’s not the only deciding factor: they weigh things up and have to be realistic. A risotto needs rice. Orzotto is all well and good, but barley (which does grow in Britain) doesn’t cut it when you want the qualities of rice. He also made the point that while you could source an orange grown in Cornwall, it may well have required a higher energy footprint to grow and transport than one grown in the more suitable climate of southern Spain.

As for that risotto, it was made with brown rice, and featured mushrooms that, McMaster said, were fruited on premises, downstairs (presumably a cellar). Its earthy, meaty flavours were offset with a tart salsa verde (featuring what the waitress called cilantro – that’s coriander in British English) and a blob of curd cheese. The umami was intense, perhaps because this was a fermented rice risotto. McMaster explained the rice was soaked then a locally made miso-type paste  was added. I said the maker of the paste sounded like a local version of Sandor Ellix Katz, the American fermented foods guru, and McMaster concurred, and also said they hoped to get Katz in for an event.

Fermentation is a time-honoured means of both preserving foods and making them more digestible and it’s something McMaster is clearly keen on as the menu, which is broken down into daily dishes in six categories (salad, “Plant”, “Dairy”, “Fish”, “Meat” and “Wild”) also featured fermented ramson (wild garlic) which, in an amusing twist of syntax “may contain shot”. I think they meant the partridge it was served with.

While the food was brilliant the language on the menu was a tad iffy, even containing a dreaded grocer’s apostrophe. Another minor criticism – when I asked the very friendly and attentive waitress a few questions about where ingredients came from, she wasn’t sure. I would say that a venue where provenance is so important should brief the waiting staff a bit better. 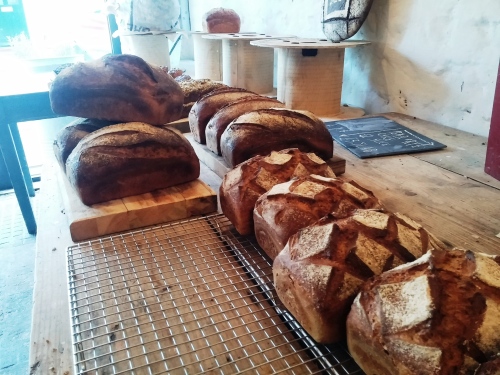 Overall, this really was one of the best meals I’ve had in a long time. I despair sometimes, having lived in Rome then returned to small-town England. Getting great food in the former was easy, getting it in the latter is a challenge. Lewes is pretty rubbish for eating out but hopefully I can get to Silo whenever we visit Brighton. Tomorrow, perhaps. So much more to try on the menu, especially as it changes daily, depending on what’s readily available.

Talking of which, I drank  apple juice, made not just with English apples but apples from Stanmer Park, on the edge of Brighton. Earlier in the day I’d been in the supermarket trying to find apple juice made with English apples, which have been cascading off the trees here the past few months. There was none. I truly hope Silo succeeds, and also succeeds in taking its place in the dialogue that encourages a move away from this kind of absurdity, and a move away from the over-packaged, energy squandering, largely industrial, frequently toxic “food” we seem all too happy to accept in Britain.