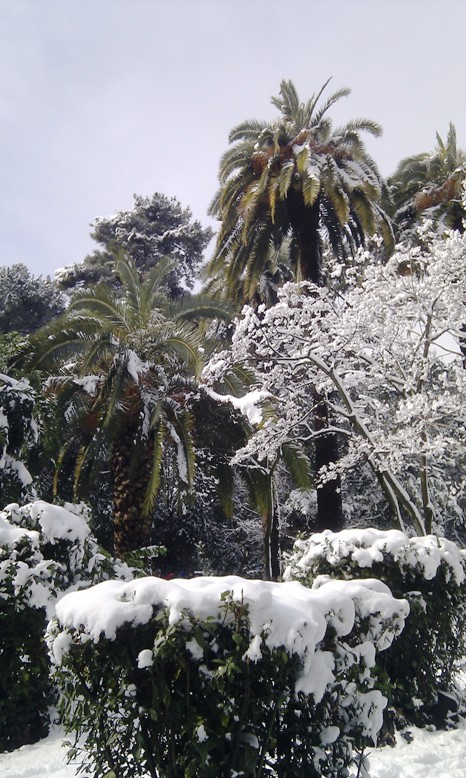 Villa Sciarra, our delightful local park, remains locked up. It has been since last weekend. Rome had its atypical dump of snow last Friday and overnight we got about 10cm. Apparently this is the most since 1986, when they got 20cm+; substantial snow apparently isn’t a common occurence, and the city doesn’t really know how to cope with it, much like much of Britain (but that’s another story). Panic ensues, schools and offices are closed, trains and roads become even more chaotic (and simultaenously less chaotic – with emergency rules that decree you can’t ride a scooter, or drive unless you have chains). For dedicated pedestrians, like myself, the pavement, the day after, was largely ice.

On the Saturday itself though, when the snow was fresh, Rome was beautiful. The ancient ruins and innumerable churches and monuments are always handsome, but an icing of snow gave them even more magic. The snow also beautified things by temporarily hiding all the little, dogshit and disintegrating roads and pavements.

The snow’s mostly gone now, bar some stubborn piles of ice. There’s more forecast for tomorrow and Saturday, but we shall see. In the meantime, I’m disappointed I can’t take my normal walking routes through Villa Sciarra, a lovely little place that nestles in a bulge in the 4th century AD Aurelian Wall. Throughout the year it’s an oasis of calm, away from Rome’s absurd traffic, and a place to enjoy some sun – or much-needed shade in the summer.

On Saturday, before the lock-down, it was a peculiar winter wonderland, the palms incongruously decorated with snow. It wasn’t all wonderful though, despite the exuberrance of the play. Alongside the palms, the park also has a substantial population of mature bay trees (bay laurels; laurus nobilis). I frequently help myself to the alloro leaves for cooking. And there were plenty to spare after the snow – as the bay population was reduced, I’d estimate, by about 10-20%. It’s hard to say, as I’ve not been able to get back in since the the lock-down. I assume it’s due to emergency tree surgery, to prune the trees with broken boughs and chop up the trees that were completely uprooted, or suffered from broken trunks.

It reminded me a little of the south of England after the Great Storm of 1987, which devastated a lot of the chalk downlands’ distinctive beech hangers. Of course, the bays aren’t quite on the same scale as the beeches – I’d say they grow to about 6m here – but it’s still sad if you’re a tree-lover, like me. Bays clearly aren’t designed to bear the weight of snow – like, say, firs or certain pines with downward sloping branches that slew off any build-up. Not all pines are designed for snow either though – the umbrellas, pinus pinea, also lost some branches here. Another park I walk through – Resistenza dell’otto Settembre – is also closed, though it only lost a few branches from its pines. It’s kinda over-zealous. Who’d have thunk Italy would have a health & safety culture that could out-daft Britain’s?

The streets in our neighbourhood, Monteverde Vecchio, are lined with another type of shrub-tree, which I can’t identify. It may be in the same family as privet, Ligustrum, but I’ve no idea. They lost a few branches too, but, again, nothing like the damage in the park.

As tragedies go, the damage to Villa Sciarra is minor, but it’s still sad. Let’s just hope if it does snow again, it’s not as much, as quickly, and the trees weather the storm. 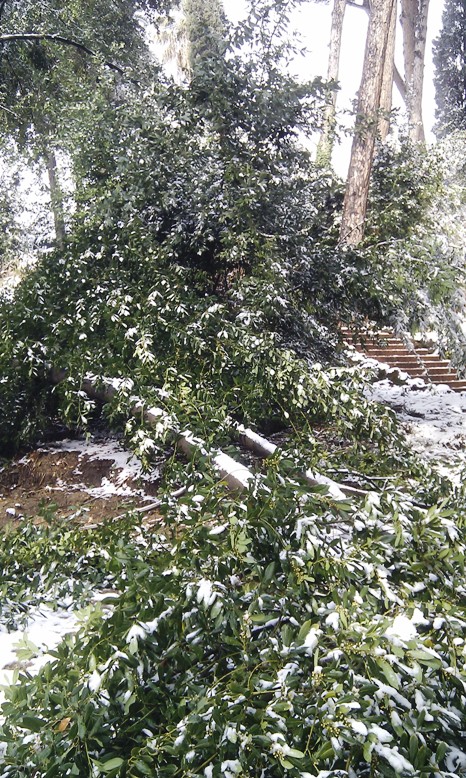