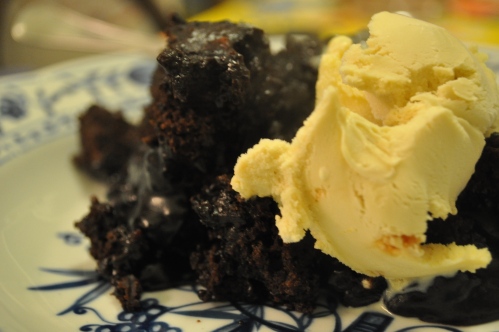 My current city of residence Rome might reach temperatures of around 40C in August, but that doesn’t mean it’s entirely lacking in the winter department. This time last year we had a dump of snow, and this year we’ve had several weeks of cool, wet weather, with some mornings starting just above freezing. Sure, it’s not winter like Moscow or Owen Sound, ON., but that’s still quite a notable temperature differential. Never mind the fact that our flat is all stone floors, white walls and seriously draughty shutters. Ergo, I feel perfectly justified in indulging in some classic, hot, stodgy British winter puddings.

This is one of my life-long favourites. It’s one of those things I simply have to eat when it’s cold and gloomy and damp.

There are several recipes knocking around, which all use the basic variant of a sponge batter with some cocoa, and a unprepossessing looking liquid made using sugar, more cocoa and hot water that is poured onto the batter before baking. It’s one of those processes where it’s hard to believe it’ll work. But work it does. The batter bakes into a lovely sponge, enriched by the sauce that, if you don’t over-bake it, pools in the bottom of the dish as you scoop the pud out to serve. 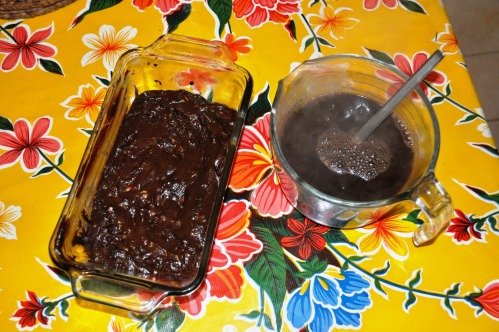 The recipe we use in our family is from The Times Cookbook (published 1972) by Katie Stewart, a cookery writer whose reputation is undergoing a well-deserved resurgence since her recent death. That cookbook was an important part of my cookery education as a kid, alongside the more successfully branded Delia Smith’s Complete Cookery Course (1978-80). Both were very reliable. Indeed, this chocolate fudge pudding recipe seems to be one of the most reliable. I’ve tried or read a few more, and some of them just seem a bit strange. For example, this one from Lisa Faulkner, says “Cover with cling film and put in the fridge overnight to set.” Why would that be necessary? And the overnight delay really just doesn’t cut it when you’ve got the specific craving and need the hot chocolaty hit in less than an hour.

So. For the batter you need:
85g self-raising four (or 82g plain and 3/4 a teaspoon of baking powder), sieved
25g cocoa
112g butter
112g caster sugar
2 eggs
1/2 t vanilla essence
50g chopped walnuts (or pecans, or whatever nut you like)
50g chopped chocolate (optional. Dark is classiest, white can be a nice surprise, milk is dandy)
1-2 T milk 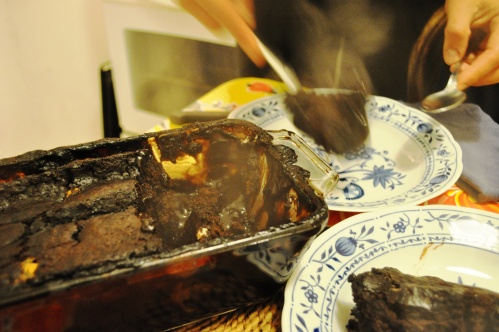 1. Cream together the butter and sugar until light and fluffy.
2. Beat together the eggs, add the vanilla, then gradually beat this into the creamed mixture.
3. Sieve together the flour (or flour and baking powder) and cocoa.
4. Beat in a little of the flour. (This helps it stop curdling.)
5. Add the rest of the flour/cocoa mix and fold it in.
6. Fold in the nuts and chopped chocolate.
7. You want a “medium soft” batter. Add some milk if it’s too thick.
8. Put the batter in a greased baking dish (volume around 1 litre/2 pints).
9. Make the sauce by combining the sugar and cocoa, then adding the hot water and stirring well. Don’t worry if it’s a bit gloopy.
10. Pour the sauce over the batter.
11. Bake for around 40 minutes.
12. Serve hot with vanilla ice cream, or whipped cream, or even clotted cream. Something that’s denied to me living in Rome. *Sob*
13. Feel warm and contented. 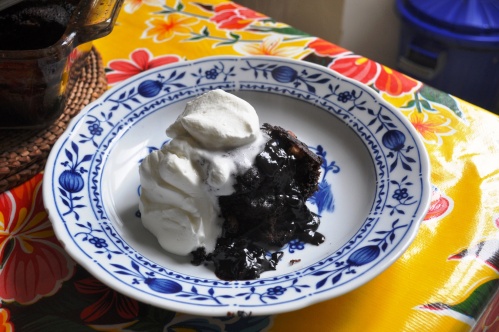