Okay, okay – I know it’s been pretty quiet round here lately but I’ve been busy working in the kitchen of the American Academy in Rome. Three intense, informative months at the Rome Sustainable Food Project came to a close last Friday. So without long days podding fava beans and agonising over the perfect cacio e pepe, some life will now return to Bread, Cakes and Ale.

As the RSFP was founded by renowned US chef and activist Alice Waters it seems only fitting that my first post in a while is based on one of her recipes. Given that I’m a cake obsessive, the first recipe I tried from The Art of Simple Food just had to be her core cake – the 1-2-3-4 Cake, which she says is the sort of simple, flexible recipe that can be manipulated to various ends: “Unadorned, it makes a simple tea cake perfectly suited for a garnish of fresh fruit; decorated, it can be anything from a birthday cake to a wedding cake to individual cupcakes.”

Also, as the RSFP is predicated on the ideas of a diet based on local, seasonal food, as well as not wasting food (all logical principles that our greedy, deluded species needs to acknowledge more), my version involves a few relevant twists.

Lemons are available pretty much the whole year in Italy, thanks to different varieties with staggered seasons. So lemons played a part. Also, we have a kumquat tree in our garden, with the fruit coming into season, so they’re in there too. Plus, I used some of the kumquats a year or so ago to make a flavoured vodka. Although the booze itself is long gone, the steeped zest has been hanging around in my kitchen looking for a purpose in life, so that played a part too.

Finally, though, before the recipe, a gripe. The Art of Simple Food is a beautiful book, essential reading for anything interested in food who wants to commit more to sustainable eating. However, all its recipes are in cup measures. This frustrates me. Cups are awkward and inaccurate – just Google around for conversions, and you’ll find they vary according to source. Only by a few grams here and there, but it’s enough to mess up the chemistry of something that needs accuracy like a cake recipe.

Cups are especially baffling when talking about things like butter – a cup of butter? How does that work? Do you have to melt it, fill the cup, then let it set up again? Or just squash a load of grease into a cup, then painstakingly scrape it out again? (Okay, I’m half-joking.)

I’ve said it before, but will say it again, grams (aka grammes) make life so much easier. For consistency and for scaling up recipe when necessary you can’t argue with a decimal system.

Yes, yes, I know that the cake is named a 1-2-3-4 cake for the quantities of ingredients, and yes yes, I can imagine a frontier mom in her gingham apron making it thusly with an old tin cup, but it’s the 21st century people. Electronic scales. Grams. Simple.

So anyway, I found an actual cup in our kitchen that conforms to the standard US cup, which is half a US pint or 236.59ml, then went through the ingredients weighing them on an electronic scale. (Again, I do liquid measures in grams too – it’s consistent, it’s more accurate, and it’s easy with a jug, electronic scales and a tare function.)

Having said all that, things like half a teaspoon of a powder don’t convert so well so I’ve included them in both formats. 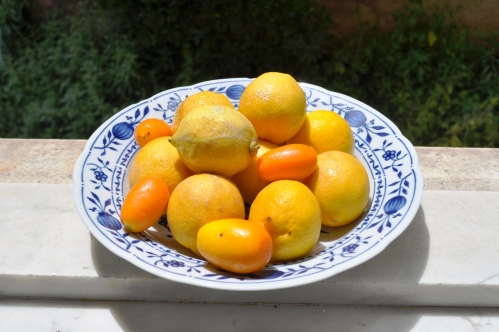 Preheat the oven to 180C.
Grease and base line two 21cm cake tins.

Method
1. Sieve together the flour and baking powder.
2. Separate the 4 eggs.
3. Beat together the sugar and butter until light and fluffy.
4. Gradually beat in the egg yolks.
5. Beat in all the zest and lemon juice.
6. Alternately fold in the flour and milk, though don’t beat or over-mix.
7. Whisk the egg whites to soft peaks.
8. Add a third of the egg whites to lighten up the mixture, combining well but again without over-mixing.
9. Gently fold in the rest of the egg whites.
10. Divide the mixture between the cake tins.
11. Bake for around 35 minutes. The cakes should feel firm to the touch and a skewer or cocktail stick should come out clean when inserted.
12. Cool in the tins then turn out onto a wire rack and cool completely. Wrap them if you want to use them the next day. The baked cake keeps well.

250g mascarpone
Citrus curd made with another recipe from The Art of Simple Food. Read on…

Method
1. Zest and juice the citrus fruit. You probably won’t get much juice from the kumquats, but don’t worry, a hint is fine and the oils in the zest are doing much of the work anyway.
2. Lightly beat together the other ingredients, except the butter.
3. Stir the juice and zest into the beaten mixture.
4. Add the butter and put into a small, heavy-bottomed non-reactive saucepan (eg stainless steel, ceramic or glass; not aluminium or copper)
5. Cook the curd mixture very slowly, stirring continually, over a low heat. Do not overheat or let it sit too long without stirring or the egg will start to curdle. If it starts to curdle, you can plunge the (bottom of) the pan into a sink of cool water to cool it off, then press the mixture through a sieve or fine strainer and continue. I know this because it’s what I did… Curds aren’t really my forte, but this one worked well in the end.
6. Cook until the mixture starts to thicken and will coat the back of a metal spoon and a line drawn with a (clean) finger will hold its shape. This is called a nappe. I didn’t know that word until yesterday, so thanks to Cameron for the education.
7. Pour the curd into a bowl, jug or jar to cool. It’ll thicken when it’s cooled further in the fridge. As you can see from the photo, mine was still a little runny, but it was pretty good after a few hours more in the fridge.

I think I fell at the final hurdle slightly. I wasn’t very refined with the mascarpone, so I’ll write here what I should have done, not what I did.

1. Beat the mascarpone slightly to soften it up. If by any freak chance you have any kumquat liquor, you could beat a little in. Or use a little limoncello.
2. Spread the top of the lower cake with curd. You can slice off the top if it’s peaked too much in the oven, to make a more level surface. I used about half of the curd I made from the above recipe.
3. Spread the undersize of the upper cake with mascarpone.
4. Sandwich the cakes together.
5. Sprinkle the top with sifted icing sugar (aka powdered sugar, confectioners’ sugar or zucchero a velo – “veil sugar”)
6. Eat large slices. You can serve with extra curd too, or make a swoosh on the plate if you’re that way inclined.

5 responses to “Lemon kumquat cake with citrus curd and mascarpone”