Seta at Thien Kim and ʼnaBio at Ai Tre Scalini

As much as I love Italian food, sometimes you just want something a little different. A different set of flavours. As Brits, we regularly get cravings for curry. There are a few places in Rome that scratch the itch, but aren’t really anything to write home about. Another craving we’ve had is for Vietnamese food. Having lived in London for many years, we were spoiled by having access to some great Vietnamese places, notably on the Kingsland Road.

Over the past 20 months or so, we’ve walked past a Vietnamese place in Rome several times. It doesn’t have a menu outside, its window is graffitied and overall it doesn’t look prepossessing. But while the summer has arrived, and all the popup bars and restaurants are lining the Tiber, we thought, let’s ignore the evening sun and instead head into the gloom of Thien Kim, which is located on the Centro Storico side of Ponte Sisto, the pedestrian bridge that connects Trastevere.

It was indeed gloomy, and quiet, but the welcome was friendly, and – would you believe it?– they had a few Italian craft beers on the menu. So alongside my food, I had Seta beer. The 5% ABV Seta is from Rurale brewery in Lombardy. 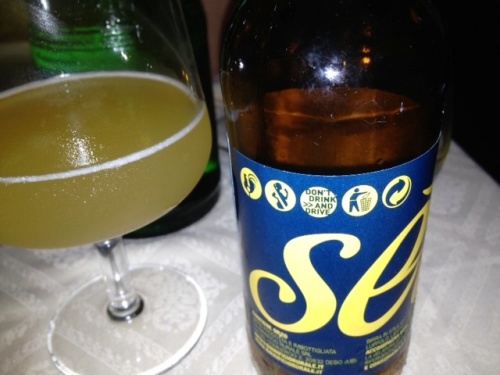 Seta means silk, and the beer was clearly designed to be a smooth, refreshing summer drink. It’s described as “Wit – blanche” on the Rurale site, that is a Witbier – a Belgian style top-fermented white beer that’s defined in part by the murkiness of the liquid. Seta is no exception, with a cloudy yellow colour and an even, mild body. Although it does contain hops, the hoppiness is negligible, and instead the flavour is defined by the presence of coriander and zest of both bitter and sweet oranges.

Interestingly (for a cereal enthusiast like me), it’s also made with three grains: malted barley, non-malted wheat (grano tenero, that is Triticum aestivum, common wheat), and oat flakes. Me and Fran got notes of ginger, jasmine, lemon. The bottled version I had didn’t have anything much in the way of head, and the body was only subtle fizzy. We’d just come from one of our favourite bars, where  – despite their sign outside saying “Birre artigianale” (artisan beers) – they’d run out of craft beers, so I had a Menabrea amber. It was foul and headachey, so the eminently drinkable Seta was a relief. It also ably lubricated the fair-to-middling food (some crisp courgette flowers stuffed with prawn, a tasty sweet-sour mushroom soup, then a totally over-salted squid main course).

The following day we were in town again and after escaping the heat to watch ‘Man of Steel’ (or “the new Superman film” as non-geeks might not get the “Man of Steel” name) in an air-conditioned cinema, we were wandering Monti thinking about dinner. As it was still fairly early though, we dived into Ai Tre Scalini, a bar and wine cellar “since 1895”. Har. It’s a characterful place though – cool without being affected, friendly without being disingenuous. When we sat down I spotted a picture on the wall of the actors Totò and Aldo Fabrizi in ‘Guardie e ladri’ (‘Cops and robbers’), one of Italian cinema’s great mid-20th century comedies of post-war struggle and social change. Cool, I like that film, thought I – only to notice that there were using the image as a sign warning you about pickpockets. That’s the first time I’ve seen such overt warnings in Rome, and it’s kinda depressing. Like British bars that look quite ordinary and pleasant but have bouncers outside them – indicating the place is rough and used to fights.

After some criminal highjinks in Naples a few weeks ago, we’re a bit nervy about such things now.  So I thrust my wallet deep and checked out the menu. It’s mostly a wine bar (Vino e specialità nostrane – “Wine and homemade/local specialities”) but they did have beers from ʼna Biretta, the brand of Birradamare brewery just outside Rome. You can’t really find a more local craft beer in Rome than ʼna Biretta. Indeed, he very brand name is Romanesco – with ʼna just being the typically truncated dialect for una, “one” or “a”. As in “Givvus a beer!”

I’ve had a lot of ʼna Biretta but never tried their ʼnaBio, so ordered one. Although the beer is apparently ispirata alle lager tedesche (“inspired by German lagers”), it’s not as pissy, thin, sharp and headachey as ubiquitous industrial lagers, indeed it’s got a surprising body. In fact, BeerAdvocate classifies its style as Munich Helles Lager, that is a more malty, fuller bodied type of lager developed in Germany in the late 19th century to counter the inroads of Czech pilsners. Birradelmare don’t classify it as such, just calling it a lager, but it seems a reasonable assessment. Sort of. Because as well as being bio, that is “organic”, ʼnaBio, like the Seta above, also involves interesting use of grain.

Ratebeer classifies its style as Speciality Grain. In this case, the grain is farro, though in Italian that word is used for three different types of ancient wheat. A quick bit of detective work  Googling indicates that the organic farro used in the beer is from Monteleone di Spoleto in Perugia province, Umbria, and that they specifically cultivate Triticum dicoccum, or emmer wheat.

The emmer isn’t malted, but is combined in the brew with malted barley. The result is a beer with more body than a typical lager while also being light and refreshing, with a golden-yellow colour, negligible head and dry, crisp flavour, with a slight aroma of cut grass or even silage. My wife said “Brussels sprouts” – which might sound freaky, but she loves Brussels sprouts, so that’s a commendation. It went down very easily, and helped wash down the dry aperitivo snacks: deepfried chickpeas, delicious slightly spiced taralli.

The word that seems to be bandied around a lot for lighter, refreshing beers in Italian is dissetante. In Italian thirst is sete, and the verb to quench the thirst is dissetare. So yes, both Seta and ʼnaBio are definitely dissetante, thirst-quenching.