Real beer, real bread, and how to define “craft” foods 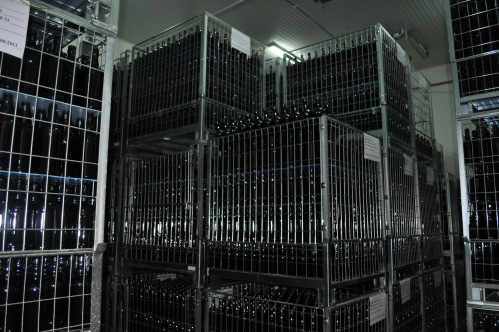 (I know long-form blogging isn’t popular these days, but think of this more as an essay. Hell, it’s no longer than an article in the paper.)

Visiting Mastri Birrai Umbri (MBU) and talking with MBU’s master brewer Michele Sensidoni and science and food communicator Jeremy Cherfas, who did a podcast about the visit here, really got me thinking about the whole question of craft foods. Especially beer and bread, as they’re my obsessions and they’re siblings born together at the start of human civilisation. Specifically, it got me thinking more about how one defines such craft foods. If you’re a baker, brewer or beer enthusiast, this is something you probably think about too.

I’ve visited MBU before, last year, and one thing that struck me then, and on the second visit with Jeremy, was the sense that the brewery was a place of industry and science. Of course it is, in literal terms – with industry meaning diligently creating something, and brewing (like baking) being a process that involves a sophisticated balance of biological processes. But also, it seemed industrial in the more technological sense, of large-scale metal equipment, and a small scale human presence. The fact that MBU is currently Italy’s biggest craft brewery, producing 1 million litres of beer a year, would seem to confirm this. And yet it is still a craft brewery.

Putting it perspective
Of course “Craft brewery” and “microbrewery” are difficult terms. Different countries have various legal or tax-related definitions of them, different organisation or beer writers have varying semantic interpretations of them.

In the broadest sense, though, a craft brewery is small, independent and uses traditional techniques. The Brewers Association in the US indeed includes these parameters in its definition, but then it goes on to define the production limit as “6 million [US] barrels or less” that is around 700 million litres or 7 million hectolitres (hl). Which is a helluva lot bigger than MBU, and doesn’t sound that small. But compared to the mega-brewery conglomerates it is. This 2010 Reuters article says Anheuser-Busch InBev (producer of the US Budweiser, amongst other brands) produced 350 million hl in 2009, and SABMiller (which owns innumerable brands including the nominally Italian Peroni Nastro Azzuro), just less than 250 million hl.

Which does put into perspective.

That perspective goes even more squiffy, however, when you consider that in the UK a craft brewery, or microbrewery, is generally considered to be one producing less than 500,000 litres (5,000 hl).

This definition of sorts came about because of the Progressive Beer Duty, a system introduced in the UK in 2002 to help encourage small, local breweries, with lower taxation based on the scale of the operation. The system originated in Germany and although it has its critics, it has been credited as one of the key factors in the rapid expansion of the small brewery scene in the UK and elsewhere.

Progressive Beer Duty was adopted throughout the EU and was potentially a factor in the expansion of the Italian craft beer scene too. There are currently around 500 craft breweries in Italy. A threshold for their production is 10,000hl per year, though the country has no other, specific legal definition of craft brewery. Indeed, in Jeremy’s interview, Michele discusses how introducing a legal definition in Italy could have a negative impact, as there’s so much variation in the Italian craft brewery scene it could impose restrictions on creativity. (And have no tangible effect on quality.)

Jeremy mooted a potential definition of MBU’s beer as not craft or artisanal or industrial, but “honest” – where there’s total clarity, indeed pride, about the ingredients. But this notion of large scale industrial beer being rushed also immediately made me think of bread. Or more specifically the principle problem with rushed, large-scale industrial wheat-based products. From the spongy, plastic wrapped products made with Chorleywood Bread Process (CBP) that dominate the UK to Italy’s comparable crime against nutrition, tradition, and taste, pancarré.

A few years ago, when I was still living in the UK, I became a supporter of the Real Bread Campaign (RBC). This was founded in 2008 under the aegis of Sustain, “the alliance for better food and farming” and its rise in prominence has paralleled the renaissance in interest in real baking. In some ways, the Real Bread Campaign is a cousin to CAMRA, the UK-Irish Campaign for Real Ale that was founded in 1971 to counter the rising tide of bad industrial beer that was then starting to dominate bars. Likewise, the RBC was started, in part, to counter the white sliced crap and encourage people to demand the real deal.

I’m not a CAMRA member, but I enjoy visiting pubs they’ve endorse and respect their goals, specifically to protect the production of real ale, and educate about it. They have specific definitions of what qualifies as “real ale”, a term they coined. The full definition can be found here, but it starts by saying “Real ale is a beer brewed from traditional ingredients (malted barley, hops water and yeast), matured by secondary fermentation in the container from which it is dispensed, and served without the use of extraneous carbon dioxide.”

The Real Bread Campaign has not dissimilar definitions. After all, both bread and beer depend on the naturally occurring, unrushed action of living yeast (and bacteria) for fermentation: the process that transforms grains into digestible and delicious products. Of course, the key difference between the siblings is that baking kills the yeast, so the ultimate bread product is not a living thing like real ale, where the process is ongoing (until your stomach kills the yeasts).

The Real Bread Campaign’s definitions are here but the crux is: “Real Bread is that made without the use of processing aids or any other artificial additives.” It continues, “Technically, the only ingredients essential for making bread are flour and water. With these two things you can make flatbreads and sourdoughs. That said, without a little pinch of salt bread can be a tad bland, and you might prefer to let someone else culture the yeast, rather than do it yourself. So, for plain Real Bread that gives us at most: flour, water, yeast, salt. Anything else is, by definition, unnecessary.”

They do say “plain Real Bread” and allow that you can add other ingredients “as long as they are natural” (eg seeds, milk etc). I like this about the Real Bread Campaign, it’s clear and passionate, but not unrealistic. I have the sense that CAMRA, for example, wouldn’t have liked the beer I was drinking last night as it contained spices and jasmine blossom; even though it was top fermented, bottle conditioned and these added ingredients were natural.

Anyway, according to RBC definitions CBP products simply are not bread; they have too many dubious additives, they’re made in too much of a rush.

So for me, rather than talking about real ale, or craft beer, or microbrewery beer, or honest beer, I’d rather just talk about real beer. It’s a term that’s come from these discourses about real ale and real bread. I feel  I can’t use the term “real ale” unless the beer in question stricly conforms to CAMRA’s definition: and that would exclude much of Italy’s wonderful birre artigianale (artisan beer). Indeed, there’s arguably a danger than CAMRA can be overly dogmatic in its perception of tradition, and traditional beer.

Respect for tradition is essential for craft food production, but there’s a danger of being reactionary, which isn’t.

One thing I love about the Italian birre artigianale scene is how dynamic it is, how open to ideas. So much of Italy food culture is mired in tradition, and as such can be hidebound. Just read John Dickie’s great book Delizia and the chapter about what qualifies as pesto, for example. It’s absurd. Likewise, viniculture here is effectively strictly regulated by tradition, with very little room for creativity.

As I said in my previous post, there’s been beer in Italy for millennia, but as it’s never been a dominant drink, it never got so mired in tradition. So now, all these craft breweries are able to take inspiration from all over the world, notably from the dynamic US craft beer scene, but also from Britain, Belgium, and beyond.

Plus, they can also dip into local tradition, to give their products distinctive, like MBU using local legumes in the brew for example. Or they can dip into classical history, for things like the Etrusca experiment co-ordinated between Italy’s great craft breweries Baladin and Birra del Borgo and the US big name craft brewer Dogfish Head, which involved working with a biomolecular archaeologist to create a beer made with ingredients consumed by the Etruscans two and a half millennia-plus ago.

The Real Bread Campaign says, “Real Bread is a natural product and just as with fruit or cheese it takes time for it to ripen. Although research so far has been limited, there is growing evidence that leaving dough to rise for longer periods can have a range of benefits to the consumer.” Benefits to the point of being more digestible, or even being able to help reduce disorders such as coeliac. One such piece of evidence comes from scientists in Italy who concluded “a 60-day diet of baked goods made from hydrolyzed wheat flour, manufactured with sourdough lactobacilli and fungal proteases, was not toxic to patients with celiac disease.”

This is the main problem with the Chorleywood Bread Process.* Throughout history, bread has been made by slowly fermenting wheat flour, then the CBP was developed in the 1960s, millennia-old fermentation times were thrown out and since then more and more people have reported digestive problems from eating CBP products.

It doesn’t matter if the brewery or bakery in question is all shiny stainless steel or a more rudimentary shed. What matters are time, quality natural ingredients and passion.

I’d even add that it requires a respect for and knowledge of tradition, but not a dogmatic adherence to it. Like Italy’s craft brewers, free from being mired in tradition. Not all their beers are necessarily great, but I at least admire their willingness to experiment, to enjoy their craft – and to relish taking the time to try make great real beer.

* I know the CBP was developed to enable British bakers to use lower-protein British flours, to reduce UK dependence on imported, higher protein (14-15%) flours, but that’s a whole other argument. Indeed, as far as I can tell, many Italian bakers still make stupendous traditional breads without recourse to Manitoba (ie Canadian strong flour), instead relying on traditional Italian flours with lower protein (11-12%).

3 responses to “Real beer, real bread, and how to define “craft” foods”