We’ve been hanging out a lot in the hot August evenings at this (relatively) new place in Testaccio. It’s basically a converted kiosk on the pavement, like an old newsstand (edicola), but somehow it manages to be cool, charming and strangely mellow considering it’s right beside the busy crossroads of Via Marmorata and Via L Galvani/ Via M Gelsomini. There’s live DJ action with great tunes (hip hop, rare groove etc) on an evening, and the kiosk looks like a vintage tram coach to boot.

Its main appeal for Fran, Rachel and chums is the grattachecca. Grattare is the verb “to scrape, to scratch, to grate” and is a reference to the way a large block of ice is treated. At Tram Depot, a veteran grattachecca sensei in a bandana skilfully scrapes and grates the ice, fills a beaker, and pours over your choice of cordial. In this case, that means French Sirop de Monin. A few bits of fruit or fresh coconut complete the refreshing concoction.

It’s a relative of granita. Or, basically, a Roman Slush Puppy, given an extra classy twist with French cordials. Which use fewer artificial colours than Slush Puppy, but some of them still look a bit gaudy to be entirely natural. The Monin site says they’re “highly concentrated, natural flavourings” – no mention of natural colours. So I’m guessing there are some coal tar derivatives in some of them…. 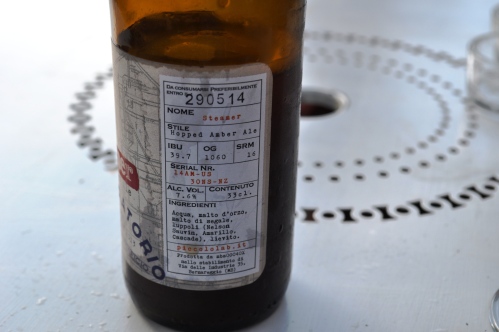 I can see the appeal of these alcohol-free ice drinks on a hot Roman summer’s day, but personally I’d rather have a beer. Tram Depot have one industrial lager on tap, but thankfully they also have a few bottled real beers. Among them is Steamer, a “hopped amber ale” created by brewer Lorenzo Bottoni that I’ve previously had at Necci. Though at Necci they had it on tap and it was comparatively flat. The bottles are markedly more carbonated.

The first time we had them, it had a massive comedy head. “Bad pour! Bad pour!” scolded my friend Stels, who was consuming a less troublesome grattacheccha. All three of us drinking the Steamer had the same Attack-of-the-Froth! 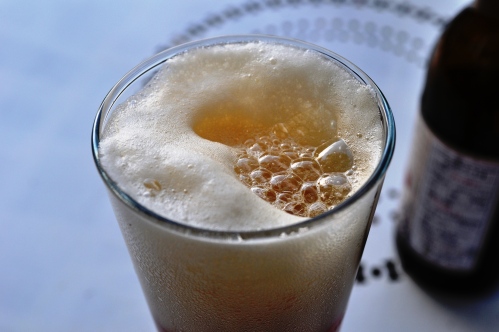 Stels told me about a technique for making the head subside. Rub a finger in the greasy crease alongside your nose and stick it in the foam. I’d never heard of this before, but she’s from New Jersey.

And yet, it works, after a fashion. Like putting soap in your bath foam, it makes the bubbles collapse. In the above pic, the orifice on the right with larger bubbles is where I stuck my finger.

The beer itself was still good. I wrote the other day after drinking Birrificio Math’s La 16 how I wasn’t entirely sold on Italian strong ales, but Steamer is pretty good stuff. It’s a lovely deep, misty amber colour, it’s pretty hoppy (it says 39.7 IBU, but it tastes like more) and it’s fairly darned strong (7.6%) but supped slowly on a summer’s evening is a great alternative to grattacheccha. Until someone invents beer grattachecca.

Info
Tram Depot, via Marmorata (angolo Via Manlio Gelsomini), Testaccio, Rome
Open 8.30am (ish) to 2.00am, seven days a week.