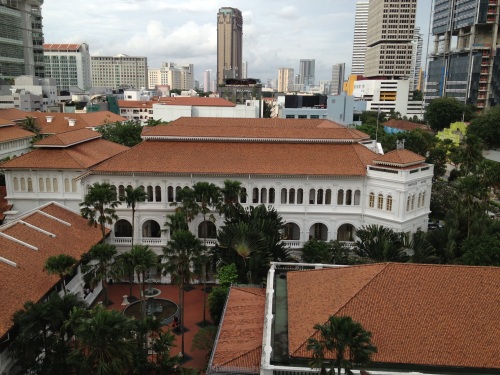 Last time we visited Singapore, we were arriving from India, barely recovered from a nasty dose of food poisoning garnered in the picturesque squalor of Kerala’s backwaters and were so relieved to be in this generally clean, orderly city with its reliable food hygiene. This time round we were coming from amiable, underpopulated New Zealand. We did frequent one food hall in Auckland for a bit of Asian food, but Singapore really is an amazing place for such affairs, known here as hawker centres.

I love hawker centres. For a few dollars and you can indulge in all sorts of Asian goodies – predominantly representing Singapore’s mix of Chinese, Malay and South Asian/Indian ethnic groups, but also Indonesian, Japanese, Thai and more.

Not that it’s all about the hawker centres though. The city boasts eating options in all price categories and styles. Indeed, our first morning we had breakfast in a place called Prego, which was a pizzeria by night and had walls covered in Italian sayings (such as “A tavola non si invecchia” – at the table, one doesn’t age). Elsewhere are fancy cake shops, restaurants with French or American-trained chefs, fusion places, and a gazillion other eateries tucked away in the endless malls, quaysides, hotels and science fiction developments. (Wandering around the Marina and some of the malls was like being in the sets for Logan’s Run or THX-1138, and entering the Marina Bay Sands – a trio of skyscrapers with what looks like a giant ship laid across the top – gave me a flashback to playing Halo 3 ODST.)

Then of course there’s the colonial heritage. Which of course means Raffles.

Named after Sir Thomas Stamford Raffles (1781-1826), the founder of Singapore, Raffles is the quintessential 19th century remnant of the British Empire’s endeavours in Southeast Asia. It started life as a modest harbour-side bungalow in 1887 then went on to expand into an array of white, colonnaded, neoclassical buildings that seem to cover at least an acre and, miraculously in a city of thrusting capitalistic redevelopment, managed to survive the wrecking ball purges of the 20th century.

We’d had discussions with various friends about visiting this place, but the fact that we were in a room in a modern hotel across the road, overlooking the Raffles complex, decided us that we just had to go, despite the costs. But would it be? A bar? Which bar? An evening Singapore Sling? No – it had to be high tea in the Tiffin Room.

I love afternoon tea and high tea. It’s my favourite form of party (okay, when it sprawls into the evening and some boozing that’s even better). I love to make cakes, scones and biscuits. We’ve had afternoon tea at various venues over the years, but this had to be the most storied. And certainly the most expensive. The Raffles cake stand and buffets set us back way more than the combined cost of all our other Singapore meals put together. They’d even bumped up the price about 30 per cent to celebrate Christmas. Yay.

And although the food itself wasn’t exactly the most refined – there were no fine pastries, no choux, no macaroons – it was still lovely. What you were really paying for was the venue – a beautiful high-ceilinged room – and the service – dozens of staff moving between the tables, removing your used plates to make room for another trip to the buffet, topping up your teacup so you end up consuming litres, and generally being very courteous. If slightly haphazard with their info – our first guy got his scones and mince pies mixed up, called marzipan “cookies” and flapjack “fruitcake”.

It was all good fun, though I had to restrain myself from starting to refer to the staff as “My good man” and wishing people a “Frightfully good Christmas.”

Anyway, we started with a cake rack, with white sliced bread triangular cucumber, salmon, egg etc sandwiches, crusts removed of course, mince pies (nice crusty pastry, mild mincemeat) and a white chocolate high-heeled shoe, dyed red, and filled with brandy flavoured whipped cream. Oookay. This latter didn’t seem so popular with the other diners; I felt kinda sorry for whoever laboured over them in the kitchen.

Then there were several buffets – one with dim sum, one with an array of cakes and scones, one with fruit, and even one with a variety of iced teas.

I enjoyed being able to fill up a plate with various national Christmas cakes – panettone, stollen and chocolate yule log. Fran favoured a white chocolate, rose, guava and champagne log thing. The stollen’s label had migrated several metres to the right, somehow, to beside a bowl of cream – clotted cream! Miraculous. A scone with clotted cream on the Malay Peninsula at Christmastime.
The German marzipan-filled enriched bread even inspired me to create this Christmas-cracker-worthy joke: “Where did you buy your German Christmas cake?” “I didn’t, it’s stollen.”

Too much tea perhaps…

What a fab experience.

They even had a harpist playing ‘Greensleeves’, ‘Parsley, Sage, Rosemary and Thyme,’ and ‘Here, There and Everywhere’.

The only real disappointment was the fact that they have a dress code – smart casual, shirts with collars etc – but don’t enforce it enough. Call me a snob, but spending all that money, and enjoying the opportunity to dress up a bit (as much as possible when one’s lived out of a backpack for two months), it was a bit shoddy to have people in jeans, T-shirts and trainers sitting nearby. Come on Raffles – standards! Standards!