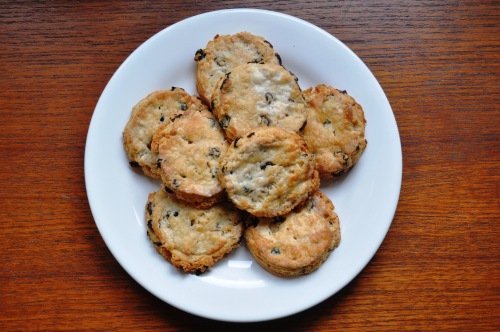 Seeing some Eccles cakes in Lewes got me thinking. Lewes, SE England, is a long way from the Eccles cake’s origins: Eccles, in Greater Manchester (and formerly Lancashire), NW England.

Why have these small cakes, made with flaky pastry and a currant filling, become commonplace in England when so many other traditional, regional products are virtually forgotten? After all, there’s nothing terribly unique about a product made with flour, sugar, fat and dried fruit. Indeed, other variables not unlike the Eccles cake include the Banbury cake* (Oxfordshire), the Chorley cake (Lancashire) and even the Cornish heavy, which has a distinctive criss-cross pattern on top. Furthermore, surely there’s a Sussex equivalent?

A quick Google lead me to Sussex heavies, aka (as I understand it) plum heavies. Which may once have been made with dried plums (prunes) but seem to have evolved into yet another variation the small curranty pastry-cake.

I’ve never seen these in a bakery, in Sussex or elsewhere. Maybe some places still make them, but I doubt it – a Google image search for “plum heavies” brought up one image when I wrote this, but that site has subsequently died. If they were more of them out there, I’m sure today’s baking enthusiast foodie bloggers would have posted more about them.

Pastry archaeology
So investigating them is a form of archaeology. Reading about them and planning a recipe is like an archaeologist looking at bones and fabric scraps and trying to envisage what the person must have looked like. You can’t ever be sure, and any idea that what I’m doing here is “authentic” is a bit silly.

It’s particularly tricky in this case as there seem to be various different interpretations. Such diversity is not unusual with any traditional recipe of course, but quite often, as with Eccles cakes, the simple fact of their popularity, and their larger-scale production, means they have become more standardised. 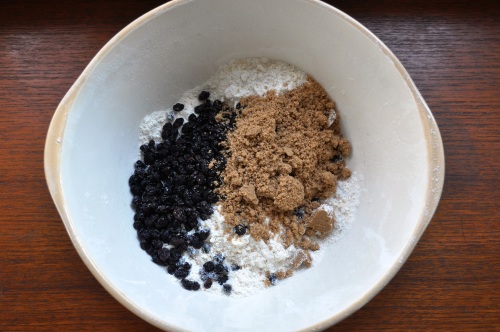 Elizabeth David’s ‘English Bread and Yeast Cookery’ put me on to another book called  ‘Sussex Recipe Book, with a Few Excursions into Kent’ by MK Samuelson. Although originally published in 1937, I’ve acquired a 2005 reprint. It contains two different recipes, acquired from a pair of 1930s Sussex ladies, one for “Sussex plum heavies” and one for “Plum heavies”. The former is simply “dough”, lard, currants and brown sugar worked together and formed into buns. The latter is much more like a scone, with lard and butter rubbed into flour, with sugar and raisins added, and a dough formed with milk. They’re rolled, cut into rounds, brushed with milk and baked.

“You have got plum-heavies for tea”
Other information suggests heavies were snacks for outdoor workers like famers and shepherds, as well as for children. Recipewise says “they were also commonly given out at Halloween to trick or treaters”, but I’m dubious. Trick or treating wasn’t a widespread English activity before recent commercial cash-ins on the US tradition (though arguably that had its origins in Celtic culture).

Recipewise does quote another nice source though, an 1875 Lewes publication with the wonderfully Victorian title of ‘A dictionary of the Sussex dialect and collection of provincialisms in use in the county of Sussex’ by Rev.WD Parish, vicar of Selmeston, Sussex. The full text includes this definition of the plum heavy: “A small round cake made of pie-crust, with raisins or currants in it.” It also includes this anecdote: “Dr JC Sanger, of Seaford [Sussex], when Government Surgeon at the Cape of Good Hope, was sent for to see an English settler. Reaching the house at tea-time, he joined the family at their meal, and on sitting down to the table he said, ‘You come from Sussex.’ ‘ Yes,’ was the answer, ‘from Horse-mouncies (Hurstmonceux), but how did you know that?’ ‘Because you have got plum-heavies for tea,’ said the doctor, ‘which I never saw but when I have been visiting in Sussex.'” (p88).

Anyway, all sources online agree they were called heavies as they were dense concoctions made with plain flour, quite possibly in the form of leftover scraps of pastry. In some modern recipes they’re more like a scone, in others more like an Eccles cake, with the paste given extra flakiness by the use of lard ­– a key cooking fat in traditional English baked goods, despite how out of fashion it may be now. I found a few recipes that even involved some basic lamination. So that’s what I’ve based mine on. And I’ve used self-raising flour, to make them slightly less heavy heavies.

Method
1. Sift together the flour and salt.
2. Cut the fats into small pieces, or even grate it coarsely.
3. Rub 50g of the fat into the flour.
4. Add the currants and sugar and, using a palette knife, bring together with milk. Don’t pour all the milk in at once – use just enough to combine. What Italian recipes call QB, quanto basta, “how much is enough”.
5. Turn out the dough onto a lightly floured surface and knead lightly. Like with pastry, if you overwork the dough, it’ll toughen up.
6. Form a rough slab and roll it out to form a rectangle about 30 by 12 cm.

7. Flake one-third of the remaining fat (40g) over the bottom two-thirds of the dough.

8. Fold the un-fatty top third down onto the fatty middle third, then fold the fatty bottom third up.

9. Rotate 90 degrees then roll out again to about the same size and repeat the process with another 40g of fat.

10. Give it one final fold in the same way with the last 40g of fat.
11. Wrap the dough in plastic and leave to rest in the fridge of about 45 minutes. More won’t hurt.
12. Preheat the oven to 200C (180C fan).
13. Roll out the dough about 6mm thick
14. Cut out 6.5cm rounds. (Or whatever size round cutter you have. This is all I could find. Lost loads of kitchen stuff in our double house move, including a large portion of Fran’s cookie cutter collection. *weep*.)

15. Place on baking sheets (greased or lined with parchment) and brush with beaten egg. Or milk, which is easier.

16. Gather the scraps and roll out again. Cut more rounds, until you’ve used all the dough.
17. Bake for about 15 minutes, or until a nice golden brown.

This recipe, with a 6.5cm cutter, produced about 14 rounds, then another 8 or so from the scraps. The ones made from the scraps rerolled have a slightly different consistency. The first rolling retains the lamination, but recombining then re-rolling the scraps mean it will be shredded. These ones, however, are probably more like the historical Victorian Sussex heavies, simply made with pastry scraps, some fruit and a sprinkle of sugar. Both are yummy, short, flaky and not too sweet.

A very enjoyable bit of food archaeology. Now I just wish some 90-year-old Sussex native would see this and reply with a description of the real things they ate as kids.

* The April 2014 issue of ‘Great British Food’ magazine has this intriguing story: “It’s possible that the recipe for Banbury cakes was brought to England by crusaders in the 12th century – a similar type of cake is known to have existed in Syria at the time, and the soldiers would have been able to acquire dried fruit and spices at a reasonable prices.” It’s a credible theory, as Midle Eastern delights like baklava and ma’amoul are in the same broad family of sweet-pastries-filled-with-dried-fruits-and-nuts. As are fig rolls, an industrialised incarnations of an (ancient) Egyptian pastry.