Bad memories, skunkiness and the question of beer in cans 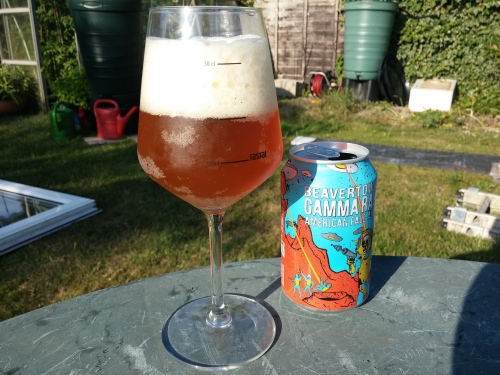 For many drinkers of real beer, the implications of cans are almost too terrible to contemplate. They certainly are for me. Cans remind me of buying cheapo industrial lager just to get drunk in the Winchester Cathedral Grounds as a teenager. As well as associating canned beer with vile industrial lagers, I always associated them with a metallic taste. I assumed this was not necessarily the vile industrial lager itself, but the packaging.

But all that’s changing. The challenge now is changing such preconceptions.

It is strange how abiding a prejudice can be, but if you learned to drink by consuming vile industrial lagers (or indeed snakebites), frequently from cans, and have memories of puking and hangovers, the psychology isn’t that complex. It’s just a kind of self-inflicted aversion. It worked too: I didn’t drink from the age of 18 to 24.

Times change
Anyway, the past few years, I’ve been increasingly encountering real beers, in cans. Initially I bridled when I was served  Angry Peaches from Garage Project in a can in a restaurant in Wellington, but this New Zealand take on an APA turned out to be delicious, and one of the best beers I had in NZ.

More recently I’ve encountered a couple of other interesting beers in cans. When we were in Rome a few weeks ago, hanging out at Tram Depot in Testaccio, I was drinking Steamer (7.6% ABV). But it wasn’t as good as I remembered: I appreciate its depth of flavour and body, but it’s not well-integrated and always seems to be over-carbonated. Its recipe needs some tweaking. So I wanted to try the other real beer they were offering, something not quite as strong (it had been a long day, a long hot day of boozing and eating). This turned out to be something called Kurt (4.32% ABV), and not Italian but Swiss. I didn’t even know Switzerland had a craft beer scene. 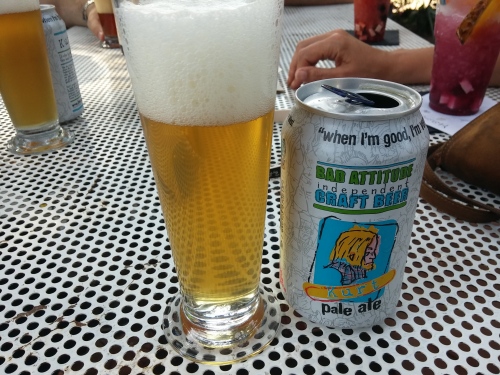 It was nominally from a brewery called Bad Attitude. Aside from any irony inherent in this name, the Bad Attitude set-up is a bit confusing. It also seems to be Ticino Brewing Company (aka Birrificio Ticinese in Italian, as the Ticino is Switzerland’s predominantly Italian-speaking canton). Which also seems to be related to another brand, Birra San Martino. The latter’s site says they were founded in 2002, but have called themselves Birrificio Ticinese since 2010. They’re all at the same address in the town of Stabio, but I can’t work out why they exist as three brands.

As for the straw-coloured beer itself, it was a bit weird. Despite being made with two hops from one of my favourite parts of the world – Riwaka and Motueka, both places in the north of South Island NZ – and some great British Marris Otter malt, most of all I got a coconut flavour. It’s not that I dislike coconut especially, but I just didn’t like it in a pale ale flavour profile. I know some beers have coconut as an adjunct, but Kurt didn’t, so I’d guess it came from an ester, those chemical compounds that give beers so many diverse flavours and aromas.*

Retro-futuristic
The most recent beer I’ve had in a can I drunk in the beautiful evening sun last night. This was Gamma Ray from Beavertown. This was the beer I’ve tried from this brewery, set up in London in 2011, and it was very enjoyable indeed.

I do love British APAs – they tend to have the decisive characteristics of the more aromatic US hops but balanced with our traditional love of beers defined more by their maltiness. In this case the hops were Amarillo, Columbus, Bravo and Magnum (“added in ever increasing amounts at the end of the boil and in the fermenter”), though the bitterness was surprisingly minimal, without any particularly dry mouthfeel. The beer was rounded out and sweetened with not one but three malts, Simpsons Best, Caragold and Caramalt. Excellent.

The experience was enhanced by the can’s awesome wraparound wide-screen design, a kind of retro-SF horror tableau of goldfish bowl-helmeted spacemen being zapped into skullfacedness by flying saucers. Love it. Indeed, on an aesthetic level, one of the great points about cans is how they design can go 360 like this, unlike with the traditional front and back labels of bottles.

Cans versus bottles
The main arguments for using cans, however, are more practical. Mostly made from aluminum, they’re simply a lighter weight material and as such involve much less energy when transported, compared to glass bottles. From both me lugging stuff home from Twenty One Wines in Brighton in a bag to massive trucks carrying it around on roads, or shipments moving internationally (something that’s arguably absurd given that beer is mostly water, but that’s another argument). Furthermore, a bottle, when used once, involves a lot more energy to manufacture and then recycle – assuming people bother to even recycle.

The other big argument for cans is that they protect the beer from light damage. The traditional brown glass bottle protects the beer from light damage to some extent, but for those companies that insist on packaging in green or clear glass, the beer will spoil, will get lightstruck when left in daylight. The UV causes a reaction resulting in what’s called “skunkiness” – that is, a chemical process creates a molecule that’s closely related to those in skunk spray.

As for the issue of the beer getting a metallic taste, so synonymous with cheapo bad lager, most cans used for beer these days have a thin inner lining so there’s no contact between beer and aluminium. Certainly all my recent experiences with “tinnies” have been entirely free of metallic hauntings and the ensuing teenage flashbacks.

So I’ll definitely be happy to drink real beer in cans now. Which is good, as it’s becoming increasingly common. This US NPR article quote says, “five years ago, just a few dozen craft brewers in the US were canning, while today there are more than 500.” So expect to see more here in the UK too.

Having said that though, probably 60 per cent of the beer I drink at home is from my local (800m away) brewery, Harveys. Their (brown) bottled beer is sold with a deposit, so I just take them back and they reuse them. But most people don’t have a local brewery with such an enlightened (nay, sensibly old-fashioned – we always did the same with milk in Britain when things were more localised) approach. So for the abovementioned reasons, there’s probably no reason to poo-poo cans any more. Even if you’re particularly hardcore about your real beer requirements. The Gamma Ray for example was in a can and unpasteurised and unfiltered.

* My friend Michele, a food scientist and brewer, suggests the coconut odour and taste may come from one of two chemicals: from the molecule d-Decalattone  (C10H18O2) or from an ethyl group of chemicals (–C2H5), which are derived from ethane (C2H6). Srangely, the latter can present with odours of coconut, or pear, or wine.

One response to “Bad memories, skunkiness and the question of beer in cans”