This is something I’ve been wondering about for a while: what’s the difference between almond paste and marzipan? Both are made with sugar and ground almonds and some sort of binding agent – usually egg, possibly oil.

I would say that marzipan is a form of almond paste, and indeed Alan Davidson calls it “a paste of crushed almonds and sugar” in his essential Oxford Companion to Food. If you’re being thoroughly pedantic, however, one distinction seems to be that almond paste has a higher proportion of almond to sugar, whereas with marzipan the proportions are more or less equal.

In Britain, marzipan is mostly used as a covering for cakes – notably on top of our traditional heavy fruit Christmas and wedding cakes, with a layer of royal icing on top. It’s also used for as a filling for things like the German Christmas cake stollen, or as a kind of sculptural medium. It’s not something I do very often, but I’ve used it to make, for example, decorative fake pebbles (below, alongside the real ones). 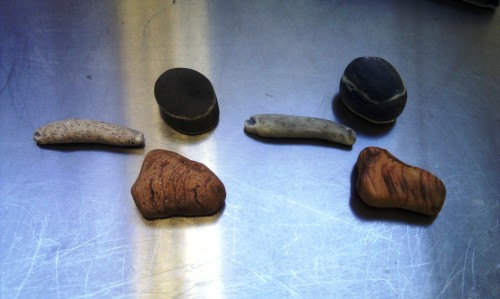 In parts of Italy, Spain and Portugal, meanwhile, they’re big on using it to make imitation fruit, a sort of sweetmeat.

An older English name is “marchpane” and this referred to large sculptural sweets that would decorate feast day tables, right up until the 18th century. These showstoppers were the ancestors of our modern wedding cakes. The word marchpane may also relate to the Italian marzapane, which can be translated as “March bread” – but the etymology is confused. Indeed the Latin root marci panis, Davidson says, means “the bread of St Mark”, (the Latin for the month of March is Martius). While one dictionary says it’s “perhaps” from the Arabic mawthabān meaning “a seated king”.

Davidson also talks about a distinction between French and German marzipan, with the production of the former involving a sugar syrup and the latter a mixture that is “dried over heat, cooked for a short time then poured onto a slab to cool”. The English version, however, generally isn’t cooked.

I’ve found one Delia Smith recipe that cooks it, but otherwise it’s a more basic concoction that relies on raw egg, one of those things we’re quite squeamish about these days. If, however, you do have a reliable source of eggs and aren’t squeamish – being unafraid of say, real mayonnaise – this is a great basic recipe that’s so easy you’ll wonder why you ever bothered to buy ready-made marzipan.

Sugar is a natural antibacterial, so the high level present is a preservative. The fresh mazipan will keep for a couple of weeks in the fridge, probably longer – but I’ve not done a controlled experiment. 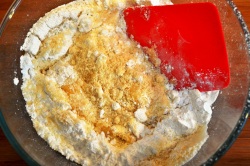 1. Put all the ingredients in a bowl and bring together, with a fork, palette knife or dough scraper.

2. Lightly dust the work surface with icing sugar and turn out the mixture.

3. Completely bring together and knead slightly, to achieve a homogenous dough. Do not overwork or it can become greasy.

4. Form into a ball or block and wrap in plastic.
5. Store in the fridge.

Anyway, I’m blogging this as I seem to be using marzipan fairly regularly at the moment. It was in the semlor I made a while back, and I’m also using it for a simnel cake recipe, which I’ll post next.

Filed under Misc, Other food, Recipes