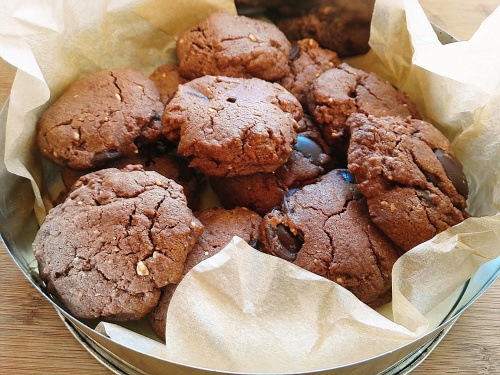 This one is based on a recipe by New Zealander Miles Kirby, published in Guardian Cook to coincide with the release of his book Caravan: Dining All Day. Kirby’s version is called salted chocolate and almond butter cookies. They’re basically a variation on the chocolate chip cookie theme, and I’m always up for those.

I’m not sure about the whole salted chocolate thing though. I can see the appeal of salted caramel, and used to Hoover up the caramello di galles – Welsh caramel, that is salted caramel – from the idiosyncratic gelateria La Gourmandise down the road from our flat in Rome. Until he stopped doing it – not a popular flavour among the other locals, apparently.

But, salted chocolate? Hm. Last night I went to the Depot, the splendid newly opened independent cinema here in Lewes, which I visited last year when it was a building site. While there, I ate a whole bar of Los Angeles salted chocolate, a gift from my sister. It didn’t exactly win me over, but then it was maybe a bad combo with a pint of overly gassy Harvey’s Golden Bier on keg I bought from the bar. (My first pint of Harvey’s keg beer I think; kegs from Harvey’s are pretty new, breaking with years of cask and bottle-only tradition.)

So anyway, I decided against including the sea salt in my version of Kirby’s recipe. Also, his uses 200g almond butter. The jar I bought was an odd 170g. As we had a jar of peanut butter rejected by my son in the cupboard, I added some of that. Kirby says the recipe works well with any nut butter. We’re getting a whole variety in our cupboard now as we’re not allowed to put peanut butter in school lunches any more.

For the chocolate buttons I used Montezuma’s organic Giant Dark Chocolate buttons. The bag says they’re “58%”, but then the ingredients say they’re 44% cocoa mass. Which I don’t understand, and I’m too tired to try and get my head around it. They’re still a quality button and I’ve messaged Montezuma’s for an explanation. Hope they reply.* They should do, as I eat enough of their product. Me and Fran are addicted (not really) to their Milking Maid truffles at the moment, which is odd as I’m usually a dark choc kinda guy. I digress.

Kirby’s recipe also says, “In a stand mixer, combine the…” Does everyone own a stand mixer? I don’t. They’re hellish pricey and I’ve never been able to justify one or find the funds. Luckily, my increasingly decrepit hand blender has beater attachments. If you don’t have any of these things, you’ll just have to beat by hand. Use some calories before you consume some.

Kirby also said to divide the mixture into 12. Now, as the total dough weight was about 1200g, this would mean some pretty massive cookies, scaled at about 100g each. I pared mine down to about 50g, a good dollop shaped between two desert spoons, and they’re still pretty substantial. I also knocked back the sugar a little from the original recipe, something I do as a matter of course.

1. Preheat the oven to 170C and line some baking sheets with parchment or silicone.
2. Beat together the butter, sugars and nut butters.
3. Add the egg a little at a time and beat until smooth.
4. Sieve together the baking powder, flour and cocoa, then add to the mixture along with the pinch of salt.
5. Combine, along with the chocolate buttons.
6. Form into lumps as described above. How big you make them is, of course, your call.
7. Put the lumps on the baking sheets, flattening them somewhat. Space out as they spread a bit.
8. Bake for about 12-14 minutes.
9. Cool on wire racks.

Eat. The nut butter gives them a light, crumbly texture, but not so crumbly they fall apart when you touch them.

* They did. A lady called Jacqui Boyd-Leslie in customer services says, “The Cocoa Mass is 44% plus the Cocoa butter 15% which is 1% over but this is to cover any slight variation. This is a little confusing, the cocoa butter is also known as cocoa mass.”