Making bread in The Walking Dead 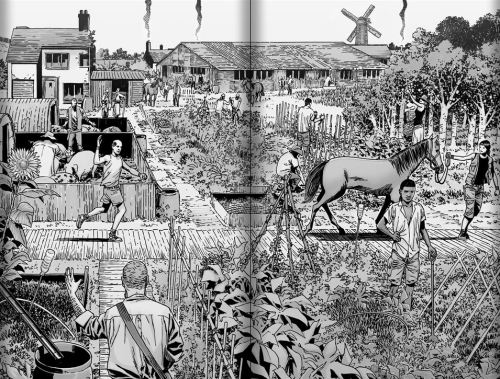 Those who read this blog will know I like bread. You may not know, however, I’m also a lifelong comic book reader. I don’t follow that many series these days, but one I do is zombie apocalypse saga The Walking Dead, which has recently taken an interesting turn. They’re still fighting zombies of course, but they’re also growing more food too.

Although many people started reading The Walking Dead comics when the TV series (2010-) became a hit, I’ve been there since the beginning, 2003. I can’t remember how I started but it was possibly thanks to my friend Dr Jamie Russell, a screenwriter and author of Book of the Dead: The Complete History of Zombie Cinema. We’re both pretty into apocalyptic fiction. I grew up with stuff like John Christopher, John Wyndham and JG Ballard. My mother was partly responsible, as she likes it too: novels like these, but also TV like the BBC’s Survivors (1975-1977). My childhood was also the era of cinema classics like Mad Max and The Terminator or repeats of The Omega Man or Logan’s Run on TV.

I’m one of those apocalypse geeks who likes to discuss how things would change, what you’d do when human civilisation collapses. I like to fantasise about fortifying my parents’ place in the country, building up its traditional southwest of England hedge-banks into a proper defensive palisade to keep the zombie hordes at bay. Or whatever.

Reality check
It’s all daft, obviously, as the collapse isn’t coming in one neat cinematic fell swoop, it’s coming slowly, now, as we speak, from our excessive consumerism, our unquenchable thirst for fossil fuels, supported by “greenest government ever” pawns who support fracking when our focus should be on energy efficiency and renewables. Such backwards policy furthers climate change, which destabilises agricultural, which causes famine, which results in population movement and increased tension in an overpopulated world. But slowly. We’re living the slow apocalypse. Which just doesn’t make for such great fiction.

Still, while all this is happening, we lap up the sudden apocalypse fiction, the bombs, the plagues, the zombies: The Walking Dead TV series is huge how, and a new trailer for the long-awaited fourth Mad Max film has just emerged via the ComicCon event in San Diego, etc, etc, etc.

I’d got a bit behind with The Walking Dead comics, but now I’ve caught up again. Thankfully, with issue 126, creator Robert Kirkman ended the protracted ‘All Out War’ storyline, which IMHO revisited too much ground already covered by the Governor storylines. With issue 127, Kirkman and artist Charlie Adlard refresh the series with a neat ellipsis. The issue is called ‘A New Beginning’ and about two years have passed since the war. The community of survivors seems to be flourishing, focussing on their food security by cultivating food, not just relying on scavenging food from before the zombie plague.

Post-apocalyptic practicalities
As much as I love the action element of apocalyptic stories, I much prefer it when they look at the practicalities of living in a changed world. This is why the BBC’s 1975 Survivors is superior to the 2008 remake. The former got stuck into the important business of how to survive after a plague had wiped out most of the population and nature was taking over again. The 2008 version, meanwhile, mostly just had its survivors bickering like soap opera characters. When they did try to do something practical – eg build a chicken coop – it was pathetic and cursory, physically and dramatically. Compare that with the original TV series, where they look at things like medical treatment, how to make candles, and even how to maintain a watermill.

The latter is particularly significant as water and wind provided the (sustainable) energy for milling grain for centuries. And milling grain means bread, the historic staple food.

Today, most people go to a supermarket, buy something sliced and wrapped in plastic and eat that. That’s not bread. That’s a post-industrial filler, a culinary deception and dietary disaster. There’s no way western civilisation could have achieved all that it has achieved (for better or worse) if we’d had white sliced as our staple.

For a community to thrive it needs a decent staple, and real bread is just that. So it’s great to see the survivors in The Walking Dead during that two-year ellipsis are farming, have built a windmill and are baking their own bread in their home, Alexandria, Virginia, not far from Washington DC. 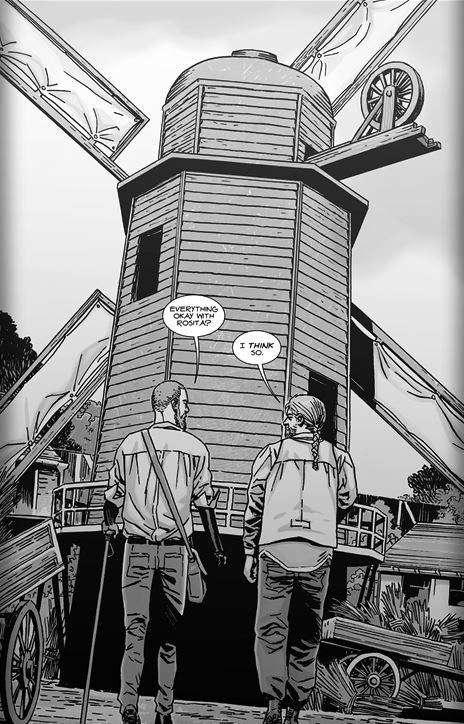 Burning issues
In issue 128, Eugene, the community’s resident dorky genius, says he just read a book about how to do it, but Rick, the increasingly physically maimed but mentally sharp leader, won’t hear it. He realises the importance of the mill and the bakehouse in his vision for rebuilding civilisation.

Although we don’t see the more extensive grain fields you’d need to feed the comic’s community of, I dunno, a hundred-ish, you do see gardens and a glimpse of orchards. Unfortunately, the way Charlie has presented the mill and bakehouse is a bit of a bodge. The artwork is as great as ever, but it’s not a credible layout. The bakehouse seems to be inside the windmill. I have never encountered such an arrangement, and suspect it rarely, if ever, happened historically. If a mill did have an associated bakehouse, it would have been a separate building due to the fire hazard of cranking a wood-fired oven near chaff, wooden structures and valuable grain and flour.

The bread itself is portrayed slightly strangely too. The baker, Olivia, is handling a peel with tin loaves on it – though they’re not in tins. I’ll give them the benefit of the doubt and say that she’s taken the loaves out of their tins then put them back in the oven to finish baking. Despite this quibbles, the scenes featuring the mill and bread are great: significant and moving.

* I doubt it though, as Kirkman generally seems to prefer his protagonists to suffer. Mistrust, human weakness and violence are the bread and butter of The Walking Dead. Not bread.