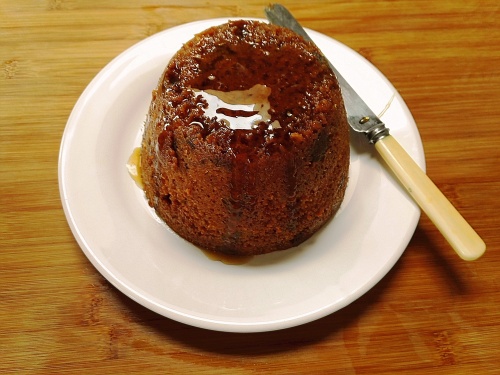 We had a pretty good summer in southern England this year, with very little rain and a reasonable amount of sunshine July to October. But now it’s definitely Autumn, with winter round the corner and that means one thing: steamed puddings!

OK, maybe not just one thing, but I do crave serious stodgy English puddings in the winter. Growing up, a favourite was treacle sponge – actually a steamed pud made with golden syrup. It’s a recipe I revisit regularly, and frequently use as the basis for variations on a theme, adding things like stem ginger, other fruits and spices.

Since the end of last winter, my kitchen whiteboard has featured an increasingly faint scribble saying “date and maple syrup steamed pudding”. This weekend we had a lovely visit from our friend Mary Margaret, who Fran worked with in Rome. She’s Canadian. So of course that’s a good excuse to reach for the maple syrup. MM said she hadn’t had a traditional Canadian Thanksgiving this year (10 October), so our Sunday roast stood in for it. She was very satisfied with my entirely non-traditional date and maple syrup pudding.

The dates were chopped and soaked in boiling water with half a teaspoon of baking soda. This is a technique used when making sticky toffee pudding, another classic stodgy English pudding. Which probably had its origins in a Canadian recipe.

I do include a bit of golden syrup here as it’s thicker than maple syrup and I felt it’d help with the texture but if you live somewhere that it’s not available (the US, I believe), just use all maple syrup. It’s a pretty forgiving recipe. 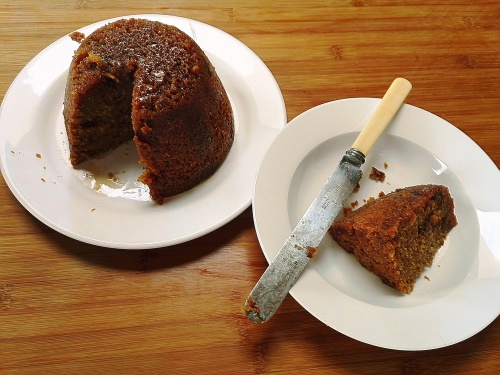 1. Put the dates in a bowl, add the baking soda and cover with boiling water. Leave to soften.
2. Grease a 1.2 litre pudding basin with butter.
3. Put the syrups in the bottom of the basin.
4. Beat together the softened butter and sugar until light and creamy.
5. Add the beaten egg a little at a time, continuing to beat. If it starts to curdle, add a little flour.
6. Sieve together the flour, baking powder and spices, then sieve this into the beaten mixture, along with a pinch of salt.
7. Strain the dates and add to the mixture.
8. Fold to combine. If it seems a bit firm, add some of the date liquid or a splash of milk.
9. Put the mixture in the pudding basin.
10. Cover the basin with a piece of foil, with a pleat in it. You can tie the foil on, but I’ve given up these days.
11. Put the basin in a large saucepan with some boiling water, or in a steamer over a saucepan, and steam for about 2 hours.
12. Remove from the saucepan and lift the foil. The top should be fairly firm and cakey.

13. Turn out onto a plate.
14. Drizzle with more maple syrup and serve warm with cream or ice cream for extra indulgence. Preferably on a cold, rainy day. If you feel the need, go for a good energetic walk – before or after – to justify it to yourself… 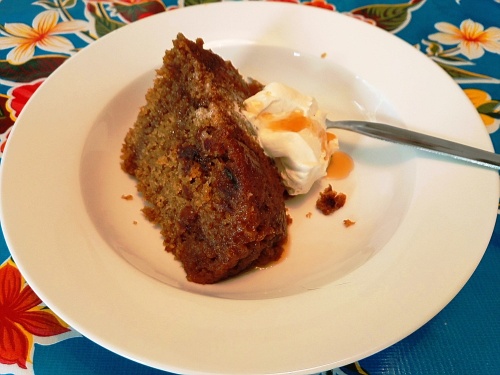