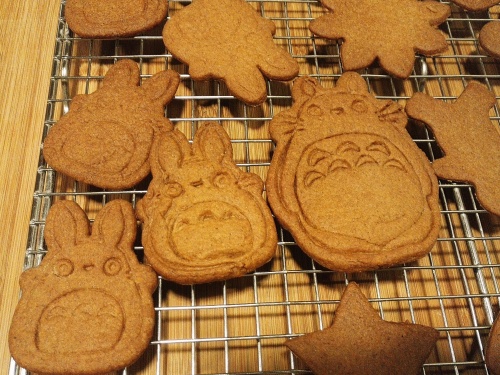 Our Dutch friend Annely told us about speculaas a few years ago. They are the spiced biscuits traditionally eaten in the Netherlands and Belgium for St Nicholas’s day, Sint Nicolaas, Sinterklaas, on 6 December. They’re also, apparently, eaten in Germany at Christmas itself.

When I say “spiced biscuit”, what I mean basically is gingerbread. They’re all related these spiced feast day biscuits. What made speculaas interesting for me wasn’t just the recipe or spice blend – predominantly ginger and cinnamon, and possibly some quantities of nutmeg, coriander, cardamom, anise and white pepper depending on your family’s or your local baker’s recipe. No, it was more the way they’re made.

Traditionally, the dough is rolled into a wooden mould, the excess cut away, then it’s tapped hard – to free the dough, which takes on the stamp from the mould. The stamps can be ornate figures of men and women, as well as animals, windmills, and, of course, clogs. Such moulds can be purchased online, here and here for example. Maybe we’ll invest in a few moulds for next year; this year, it’s miscellaneous cookie cutters and Totoro (and Chibi and Chu, too).

I’m even more excited about this because while I was doing this recipe, with Fran making a few batches, I had a child-free chance to visit my local library. I was researching a fabulous local building and its clock tower, but in a book called Memories of Old Sussex by Lillian Candlin I found a chapter called Fair Gingerbread. This was all about the spice biscuits historically sold across the county at fairs, when gifted called “fairings”. One blog I read about speculaas said the figures could be given during courtship. I can imagine this happening with Sussex fairings too.

Candlin says they were patterned or shaped as “effigies” – ie figures. “The wooden moulds that were used for stamping ginger-bread are now museum pieces.” I must see if any are still on display in Brighton museum, as they’re very similar to those used to make speculaas. She mentions moulds of the “Duke of Wellington on horseback, all complete with sword and pistol; a solemn looking cat and a grandfather clock.” And then there’s this one, from Horsham, which appears to show a cockerel sitting on some trousers.

If I ever see such things in antique shops, I’ll know what they are now. Such a shame their use is another tradition we’ve lost in England.

Anyway, here’s a recipe for speculaas (the plural; singular speculaasjes). Frankly, I’m happier with it than my earlier gingerbread, as it’s got a nice snap: so long as it’s rolled thinly (thanks Fran). About 3mm. Tweak the spice mix to taste.

1. Cream butter and sugar.
2. Add the salt and milk and blend. Note, the milk quantity is QB, as the Italians say – as much as you need. You might want to add a dash more.
3. Sieve the flour, baking powder and spice mix in then bring to a dough.
4. Form a ball, then wrap and rest – ideally for at least 12 hours but the results are fine if you want to do it sooner. Total dough is about 1200g – quite a lot. So you could freeze half.
5. Preheat the oven to 150C.

6. Roll out the dough to about 3mm and cut with cookie cutters of choice. (If you have moulds, flour them and push in the dough. Cut away excess. Bash the mould on works surface to release the shape.)
7. Place on baking sheets lined with paper or mats.
8. Decorate as you wish with flaked almonds or nibbed sugar.
9. Bake for 30 minutes.
10. Leave to cool on a wire rack.

Oh, and etymology geeks – the name may derive from the Latin speculum. This means mirrror (in modern Italian, specchio… ah, that reminds me of via degli Specchi, the address of an old favourite haunt in Rome, Open Baladin, with its 50 or so craft beers). It’s a neat suggestion, as the mould’s stamp is then mirrored in the biscuit.

Oh 2. I realise my daughter’s hair looks a bit disreputable in the pic. I did brush it this morning, but well, she’d just got up from an afternoon nap when she was “helping” Fran make the biscuits. What I was more impressed with was her technique for sprinkling flour and rolling the dough. Go Raver, aged 2!