If you’re based in Rome, and have a blog, and that blog talks about food, there seems to be an unwritten rule that at some stage you have to talk about Gabriele Bonci and his pizza. Far be it from me to break that rule.

A couple of weeks ago, I did Bonci’s two-evening pizza course. The day after the first class, I wrote a somewhat fevered draft about the experience. It wasn’t very level-headed (the working title was “Making pizza and taking the pizz”. You get the picture). The day after the second class, I wrote another piece. It was more level-headed, but little more than notes. So this is my third attempt. Hopefully it’ll be an honest appraisal, and sufficiently level-headed. (That’s not always my forte.)

Anyway. The course was a birthday present. A somewhat generous one, as it was really flipping expensive.

For those who don’t know who Gabriele Bonci is, here’s a little background. He’s a pizzaiolo (pizza-maker). He’s an celebrity chef. He has an acclaimed hole-in-the-wall pizza a taglio (pizza by the slice) place behind the Vatican called Pizzarium. He also recently opened a bakery, Panificio Bonci, nearby. He’s a big bloke, like a rugby player who’s enjoying the clubhouse more than the pitch. 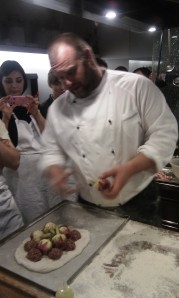 I first met him, briefly, at Open Baladin, the wonderful beer bar run by Italy’s biggest microbrewery. It was last autumn, and I’d been experimenting with making bread with chestnut flour. When I chose a chestnut beer (Borgo’s Castagnale), I got chatting with a friend who works in the bar, and mentioned I’d made the bread. She called over Bonci, who looked at a photo on my phone, made some encouraging noises, then wandered off to resume his duties (his outfit provides the bar with its breads). My friend said he’d suggested I do one of his courses, which seemed like a good call – except my Italian was non-existent then. After a year or so, I thought it might be ok – after all, a course is not just about the spiel, it’s about the demonstrations. And what I really wanted to learn was about how to handle very wet doughs (his starts with about 750g water to 1kg flour – ie 75% – then he adds more to bring it up to about 85%).

It was a foolish assumption, however, as my Italian really wasn’t adequate. Never mind the fact that Bonci talks in a Romanesco growl. Though I did manage to get more of an understanding of what Bonci stands for. I’d already investigated him a little when I first heard of Pizzarium, but broadly his message is much along the lines of my feelings about food: a rejection of industrial production; a blend of knowledge and instinct; an emphasis on  seasonal and traditional ingredients (eg he uses a natural leaven and einkorn flour at Pizzarium; we used easyblend yeast in the classes, as it’s nominally easier); no fear of innovation.

Bonci’s greatest achievement, perhaps, is the latter. The Italian obsession with food involves: eating; talking enthusiastically about food; patronising foreigners by default with the assumption we don’t cook and know nothing about food; and telling everyone that there’s only one way to do something in the kitchen. That way is the way your mum, or grandma, did it. Broadly, Italian food culture is anti-innovation. And yet Bonci does innovate and he’s made a success of it. He’s not afraid to experiment with the toppings of a pizza. Or indeed to variants with filled or upside-down pizzas. On the second evening he started by making a load of meat-fests: a leg of lamb, some garlic and rosemary all wrapped in pizza dough; ditto with chicken legs; ditto with sausage meat and artichokes. All baked slowly. (Though this technique is actually steeped in traditional too. Apparently, it’s an old rustic way of cooking: in an era of communal village ovens, it masked the cooking smells of your meat so your neighbours wouldn’t come blagging.) 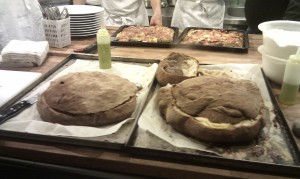 For a Brit, and someone who’s always experimented in the kitchen, this is no great revelation but the enthusiasts crammed into the Tricolore kitchens on Via Urbana for the course, this message was received like the Sermon on the Mount. Indeed, there’s a profound level of sycophancy around Bonci. US Vogue called him “the Michelangelo of pizza”, and it’s impossible to write about him without reiterating this. I’d just like to point out now, however, that this is clearly hyperbolic bollocks. Very, very few people could spend years lying on rickety scaffolding painting vast expanses of ceiling, or wrangling with hefty chunks of marble and making incredible works of art like The Deposition or the Pietà. But anyone can learn to make pizza. Indeed, Bonci’s message is just that – try it yourself! Practise! Experiment! Enjoy!

I wonder whether he’s embarrassed by the “Michelangelo of pizza” thing. He seems like a decent guy, though he probably can’t help getting caught up in  the whole rock-star thing. For example, his recipe book, The Game of Pizza, is modestly subtitled Le magnifiche ricette del re della pizza: “The magnificent recipes of the king of pizza”!

His message is great and his pizza is quality, but the course itself was somewhat farcical, especially considering the not inconsiderable cost. Sure, it included eating and taking away as much decent pizza as you could hope to eat, but it really falls down with the location, format and facilities.

The Tricolore kitchens are tiny, enough room realistically for about six or eight students. Yet a dozen are crammed in. We each had about a square foot of work space, but mine was at the back of the class, in a busy thoroughfare. Sure Italians like the huddle more than Brits (who have this strange concept of “personal space”), but paying hundreds of Euros to get in the way of the staff was a bit shit. I mentioned this inconvenience, and the manager moved me for the second evening, but then I was right in the way of one of the main ovens so had to keep moving again. Apparently, it’s hard to find a decent teaching space with enough ovens in Rome. Really? In the capital city of a country that prides itself on its cuisine, there’s no better teaching space? It’s hard to believe.

This has turned into more of a ramble than I planned, so I think I need to summarise.
Bonci and the Bonci pizza courses.
Pros
Great overall message (you can do it!).
Solid technique demonstrations (don’t be afraid of 85% hydration; I’m getting there…).
You make a lot of pizza, you eat a lot of pizza, you take home a lot of pizza.
Cons
Expensive for six hours of lessons.
Especially expensive considering the tiny, totally inadequate space.