What is “farro”? Wheat names in English and Italian 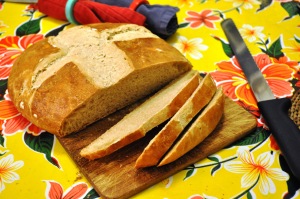 This is my latest loaf. It’s made with 100 per cent farro biano flour. Farro is the Italian word for spelt. Or is it? This is something that’s been nagging me for a while.

Farro is a big part of various Italian regional cuisines. So, for example, there’s the classic Tuscan zuppa di farro e fagioli – spelt grain and bean soup. When I first tried to make zuppa di farro e fagioli, back when my poor Italian was even worse, it inevitably involved trying to work out what specific grain to buy. As well as having to try and work out the difference between farro perlato and farro decorticato (more on which later). This also led me to double-checking the assumption that farro is literally translatable as “spelt”.

I knew spelt was an ancient strain of wheat, that is a member of the Triticum genus of the Poaceae (or Gramineae) family of grasses, but it’s also known as dinkel wheat, and its proper scientific name is Triticum spelta. Okay, “Spelt wheat”, check. But when I checked “farro” on Italian Wikipedia it informed me that Italian uses the word to describe three species of wheat.

Now, I’m not a scientist, but I am interested in taxonomy and how it aids clarity and accuracy when, for example, discussing the production of a type of bread. When I first encountered these Latin names, I was mildly exasperated that when I buy the packets of farro flour, the packaging blurb doesn’t include the specific species. Normally, I like to buy stoneground organic flours from renowned or local producers. I have, for example, been buying my flour from Mulino Marino (though, yes, they’re in Piedmont, so not exactly local to Roma. I must find a supply of Lazio grains milled in Lazio) and their packets just say Farro bianco etc. Today, however, I noticed the Coop supermarket’s organic farro flour is labelled with “Farro spelta”, so I think it would be fair to assume that is Triticum spelta.

A little more investigation, meanwhile, reveals that farro piccolo, aka small farro, aka farro monococco, aka Triticum monococcum is the ancient wheat species we know in English as einkorn. Though, to add to the confusion, in English Einkorn can also refer to its wild cousin, Triticum boeoticum.

Checking Triticum dicoccum, meanwhile, reveals that Farro medio, aka medium farro, aka farro dicocco, is what we know in English as emmer (the name is related to the Hebrew for “mother”). Oh, and according to the Slow Food book ‘Pane, pizze e focacce’, it’s also known as spelta, just to add to the confusion, while Triticum spelta is also known as spelta maggiore. It’s an awned wheat, that is with most bristles on the ear. Apparently, when Italians refer to farro, it’s most commonly used to mean this grain. So it’s likely that in the abovementioned soup, for example, the grain will be Triticum dicoccum, emmer.

Oh, and while I’m at it with the ancient wheat species, another flour I encounter in Italy is KAMUT. This is a trade name for Khorasan wheat, aka Triticum turanicum. Khorosan is the name of a region in northeast Iran, just to the east of the ancient Fertile Crescent where so many of today’s most common food crops were first cultivated, notably grains.

Just when I think I’m achieving some clarity with this issue though, I have to return to the question of perlato and decorticato. Perlato literally means “pearly” and as such relates to pearl barley, a traditional ingredient in British cuisine, such as the lamb knuckle stews I hated so much as a kid. Pearled grain has in fact not just been hulled, or husked (that is de-hulled, de-husked), it’s also been polished to remove the bran. Farro perlato cooks down to fairly mushy in about 20 minutes. According to the handy glossary in Zuppe, the soup book from the Rome Sustainable Food Project, farro perlato is emmer.

Decortico literally means husked too, and English does have an equivalent word, decorticated. But the difference here is that it’s not been polished, and when farro decorticato is cooked, it takes longer to soften, and indeed retains more bite even after about 45 minutes. In Britain, we’d make the distinction between pearl barley and hulled barley. The other English name for these hulled grains is groats.

Meanwhile, as wheat is the third biggest stable crop in the world, after maize and rice, I just want to mention a few more species.

The most commonly cultivated wheat is Triticum aestivum, known, unsurprisingly, as bread wheat or common wheat. It was first cultivated in the prehistoric period, though it’s been bred rapidly since the 1960s to increase the amount of endosperm, the starchy part of the grain, for white flours. Another major wheat species is Triticum durum, durum wheat, a descendent of emmer that is used for dried pasta, semolina and couscous. You can buy both semolina and durum flour here; the latter is what’s known as farina di grano duro: hard grain (wheat) flour. The hard here is not used in the same sense as in English: when we describe a flour as hard, we mean it’s high protein, high in gluten.

Right. That’s quite enough of all that. I’m not even going to touch the question of hexaploid, tetraploid and duploid wheats, or the matter of seasonable wheats. I’ll save those subjects of another day. Plus, I’ll also save a discussion of why I’m making the transition away from modern baking with modern wheat varieties for another post.

13 responses to “What is “farro”? Wheat names in English and Italian”