Pane di Lariano is bread from Lariano, a comune in Lazio about 25 miles southeast of Rome in the Alban Hills. As such, it’s a very common bread in Rome. I haven’t tried making it yet, but in the meantime here’s a bit of an introduction.

It’s a classic, simple bread, but one made with an ancient method. It’s made with wholewheat flour (farina integrale), 00 or 0 flour, salt, water, and a natural leaven (aka sourdough starter).

In some ways it’s not unlike a British wholewheat loaf, but it has a lovely irregular crumb, a pretty irregular baton form, and a serious crust. The one I’ve been eating the past few days is from Volpetti, a costly emporium of foodie delights beloved of Romans  and tour groups (who can be frequently found blocking the pavement outside the shop in Testaccio). Volpetti seems to offer a wholewheat or a white version.

Most bakeries in Roma province will sell it. The renowned Roscioli says this on its own site: “One of the bakery’s specialities is Lariano Bread, a naturally risen, oven-baked bread, filled with raisins, nuts or olives.” Which all sound delicious, even if they’re – arguably – not entirely traditional. Shock horror.

Recipes I’ve been looking at suggest a long knead and a short proving time. I shall begin to investigate after I’ve tried a few more from different bakers. Hey, it’s Christmas. There’s only so much experimentation one man can do, and currently I’m busy making a Swedish Christmas bread.

In the meantime, some gratuitous shots of how we’ve been eating the Lariano today.

We started out with a Lariano and pancetta sarnie. We’re Brits. We need bacon sarnies (other than during the 20 or so years of my life when I was vegan, vegetarian or pescetarian). This is our best experiment yet in trying to get that bacon sarnie hit with Italian ingredients. Pancetta is, of course, not bacon, it’s cured differently, and this one even had chili in the mix, but boy was it good. 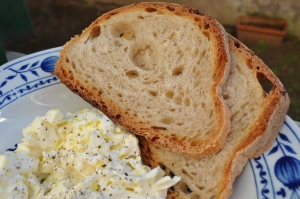 At lunch, we had some pane di lariano with burrata. Burrata is, quite possibly, the most indulgent cheese in the world. I suspect it’s certainly up there with the fattiest. It is – quite literally – half mozzarella, half cream. Lawks, I’m going squiffy just thinking about it. Pity we finished it all off at lunchtime. I never ate it before coming to live in Italy, but thanks to Simon for the introduction. Apparently it became a “next big thing” in the UK in 2011, so by the time we move back (whenever that may be) hopefully it’ll be more readily available. It’s one of those things it’s hard to imagine living without once you’ve tried it.

Anyway, enough cheese fantasising. Some time in the new year I plan to start trying out recipes for pane di Lariano. Watch this space.

One response to “Pane di Lariano I – preamble”