The easiest way to describe Brutti ma buoni (“ugly but good”) is as nut meringue cookies. All the ones I’ve encountered in Rome have been made with hazelnuts, and many of the recipes online seem to be also. But there’s also a variant made with almonds.

Italian Wikipedia says they’re also called Bruttibuoni, made with almonds and are from Prato in Tuscany. I suspect a lot of other Italians might take issue with that though, as they do seem to be a fairly widespread. Indeed, a bit more googling, and another source claims they’re from Varese, in Lombardy, north of Milan. Yet another calls them Brut ma bon (a more French-sounding dialect name) and gets even more specific about their origin: not just Varese, but Gavirate, a town in the vicinity of Varese.

Whatever the history, bottom line is that they’re a meringue-type cookie (ie made with egg whites, no fat and little or no flour) that are rich in chopped nuts. Heck, even us Brits have a traditional hazelnut meringue, so I’m really not sure it’s the sort of recipe anyone can really stake a claim to.

I decided to make some as we had some egg whites left in the fridge from making custard. The recipe I used is from Biscotti: Recipes From The Kitchen Of The American Academy In Rome. It’s the third recipe I’ve tried from there following the wonderful Honey and farro cookies, and the Pinolate (pine nut cookies). I need to try the latter again before I blog it as my first batch wasn’t quite right.

Anyway. While baking these this morning, I looked around to compare recipes, and – would you Adam and Eve it – my favourite baker Dan Lepard published his recipe a few weeks ago in The Guardian. It’s an indication that despite how basic these cookies may be, there are several approaches to the method. His doesn’t require the eat whites to be beaten, uses pre-skinned hazelnuts, and involves combining all the ingredients in a saucepan. I will have to try that for comparison. One day. Not today. Not when I’ve already got 30 biscuits cooling in the kitchen. Another recipe, from a Canadian cookbook, meanwhile, also involves cooking the sugar and egg whites together, then beating them. That approach is more like a classic Italian meringue, and certainly the results in the pics look more meringue and less cookie. 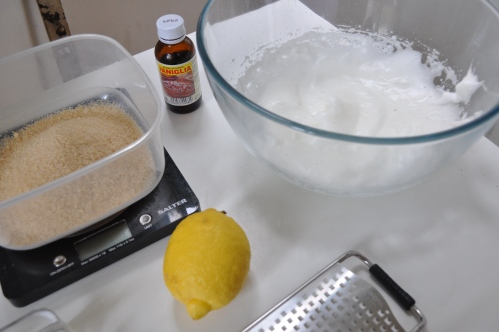 So. As usual, I’m tweaking as I go along. The original recipe made a lot of mixture, but as you turn off the oven at the end of baking and let the cookies cool inside – as you do with meringues – you either need a massive oven, or should do half quantities. So I’ve halved the original recipe. I’ve also added some almond essence – simply because it’s more explicitly nutty than just using vanilla essence. Ideally I’d use hazelnut essence but I don’t have any.

1. Put the nuts on a tray, then roast them for about 15 minutes.
2. Turn the oven up to 180C.
3. Take the nuts out of the oven and rub them with a tea towel. This removes some of the skin. Don’t agonise though. The inclusion of some skin adds a depth of flavour, IMHO. (I also prefer my peanut butter to be wholenut, skins and all.)
4. Put half the nuts in a mixer and give them a quick whizz. Just break them up. You don’t want to grind them.
5. Put the other half of the nuts on a chopping board and chop roughly. (The original recipe has you chopping them all by hand, but a) that’s labour intensive and b) I like the mixture of sizes and texture this method creates. Mades the results extra-brutti.)
6. Beat the egg whites to a soft peak.
7. Beat the sugar into the egg whites, to a firm peak, then add the essences.
8. Add the zest and flour to the nuts.
9. Gently fold the egg white mix into the nuts.
10. Put teaspoonfuls on a baking sheet lined with parchment, leaving about 4cm between (though they don’t spread much).
11. Bake for about 12 minutes, until only just starting to colour.
12. Turn off the oven, leaving the cookies inside to continue baking as it cools. Leave for about 10 minutes
13. Remove and cool on a wire rack.
14. Enjoy.