Easter in Rome – colomba, casatiello, seasonal pizzas and the like

If you like baked goodies (and considering you’re visiting a blog named Bread, Cakes and Ale, I have to conclude that you do), Easter is a great time to be living in Rome. Sure, the Spring might be making half-hearted attempts to arrive, and sure the mild + damp has resulted in my first 5am mosquito strafing (damn them), and sure the city council might have decided to move my favourite farmers market out of walking distance (from Testaccio’s Ex-Mattatoio to Garbatella – *weep*. End of an era) BUT the bakeries the past week of so have been full of seasonal specialities. Which compensates nicely.

This is my, um, second Easter in Rome, and I vowed I’d try and make X or Y after seeing, buying, consuming and enjoying them last year. But you know what, I can’t get that really nice light airy crumb on an enriched dough in my domestic oven, and I’m working long hours, so I thought stuff it, I’ll just buy an X. In this case the X refers to colomba.

Colomba means dove in Italian, so this is an Easter dove cake. No doves are used in the bake though. Instead, Colomba is basically the same kind of enriched dough as used in a Panettone, just baked in a different form. Indeed, it’s shaped like an X, appropriately enough for Easter and considering my phrasing above. Though the X isn’t supposed to represent a cross, it’s supposed to represent the shape of a bird, in flight. You know, wings outstretched on either side, head, tail. Ta da. 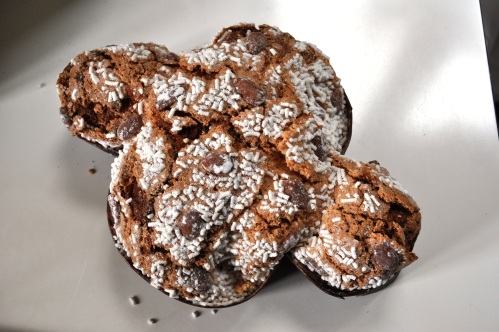 We bought ours from Pasticceria Nonna Nani, Via Giacinto Carini 35, Monteverde Vecchio. It was made with a natural leaven though it had no trace of a sour sourdough flavour, presumably thanks to the generous presence of sugar, eggs and candied peel. Very nice.

While buying the Colomba I also spied Nonna Nani’s Casatiello. I’ve seen these a lot in Roman bakeries the past two Easters, though apparently they’re not Roman traditionally, they’re Neopolitan. Indeed, a Neopolitan lady who was giving me Italian classes last year gave me some.

This bread is most notable for the presence of eggs placed in the dough before baking, whole, intact and intero, including the shell. The dough is made with lard, and also contains cheese(s) and cured meats. This recipe on the Giallo Zafferano site includes pancetta and salami, but the Italian Wikipedia entry says it should contain cicoli. Otherwise known as ciccioli. In the ‘Pig’s Fat’ entry of Gillian Riley’s Oxford Companion to Italian Food, she says “Strutto is the name of lard: fat from all parts of the carcass, internal and external, rendered down – the delicious crispy bits left over are called ciccioli.” 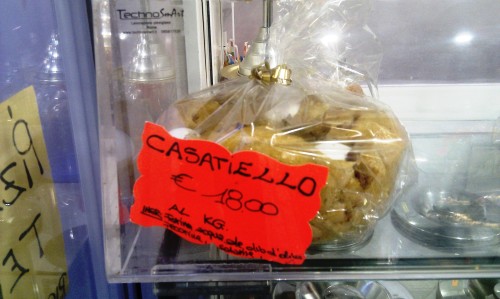 So now you know.

Now, I’m not much of a meat fiend, so I’ve never really been that drawn to Casatiello, though my wife Fran is a meataholic, and was keen to bake something meatily traditional this Easter. It’s the end of Lent, so a blow-out is kinda traditional I suppose. As I was researching Italian Easter baked goods, sweet and savoury, I came across pizza gaina/pizzagaina, also known as pizza chiena.

This seems to be a type of pizza rustica or pizza ripiena that’s made for Easter. Before you say, “eh, pizza?”, note that the word doesn’t just refer to flat bread discs with stuff smeared on top here in Italy. Pizza rustica, for example, is a generic term for things that are basically rustic pies – though rather than being made with a pastry crust, they’re made with a yeasted pizza dough crust. Pizza ripiena, meanwhile, literally just means stuffed or filled pizza. No one really seems to be that in agreement about the origins of the word pizza, so I’m not going to go on an etymology ramble. If you read Riley, or John Dickie’s Delizia!, the term seems to have had many and varied uses.

Oddly, I can’t really get a handle on where pizza gaina/chiena is from. I’ve not actually seen it in bakeries here in Rome and most of the recipes online seem to be American, or Italian-American, rather than Italian. And even Britain’s own Nigella Lawson has a version, though she makes no mention of Easter, and simply calls it Pizza rustica. Indeed, it’s quite a natural fit with British food, as it’s really not unlike a ham and egg pie. 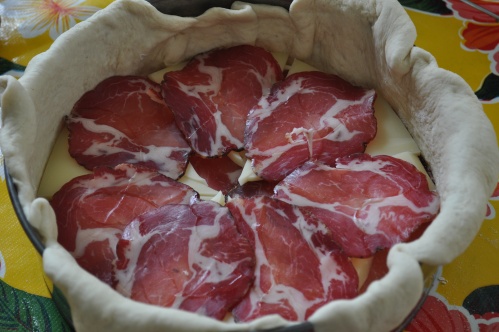 The version Fran did was basically just an excuse for a meat (and cheese) fest. She made a basic white dough and used it to line a springform cake tin. She then filled the case with various strata of cheese and meat. Vegetarians – look away! Vegans – look away and weep!

In this pic (above) you can see the freshly baked pizza gaina, still cooling in its springform tin. Alongside is a wholemeal farro loaf.

Another type of Easer pizza I have seen in Rome is the pizza ricresciuta. This is even more unlike your familiar disc-shaped pizzas because it’s tall, round loaf or cake eaten for Easter breakfast. Indeed, it seems to come in sweet and savoury versions, though I’ve mostly seen cheesey ones in the windows of Roman bakeries. Crescere, btw, means to grow, to grow up, to increase, so I guess you could imagine it as a pizza dough that’s been left to expand, to shake off the shackles of disc-like flatness.

Look, I know the Simnel Cake is the traditional British Easter cake, but I really don’t much like dense fruit cakes, okay? In our family, we’ve always just made a lemon sponge decorated with lemon butter icing and Mini Eggs. So that’s just what I did. Annoyingly, I didn’t really get to thinking about it until Easter Sunday then made it Easter Monday. What I really thought would be a nice Italian twist would be to put a layer of mascarpone in the middle, along with a layer of lemon curd (maybe that bit’s not quite so Italian), then maybe just a sprinkle of icing sugar on top. None of that happened though. I noobed my lemon curd, and we couldn’t get any Mini Eggs, so instead went with those sugar-coated chocolate eggs that resemble real eggs. And are really hard on the teeth.

Then I forgot to take a proper photo, which is a shame as it was cute. All I’ve got is this crop, with the cake nestled among many wine bottles. We were  doing a sensible, sophisticated wine tasting, honest.

One response to “Easter in Rome – colomba, casatiello, seasonal pizzas and the like”