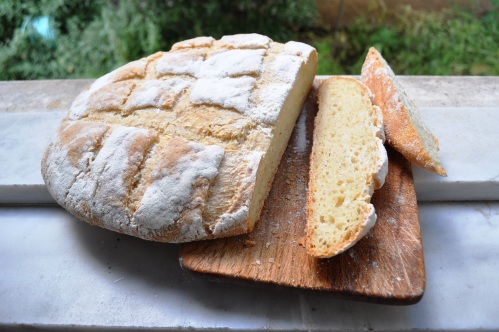 Maize, mais, Zea mays – the cereal cop mostly commonly known these days as “corn”. Although my brain still can’t quite embrace that as in British English “corn” is a more generic word for cereal grain, specifically in England it’s traditionally used to refer to wheat grain. Etymologically, it apparently comes from the old Germanic and Norse word korn meaning “grain”.

The word corn still makes me think of corn dollies – forms and figures woven in Britain from the harvest’s last sheaf of wheat, ryes, oats or barley. Although wonderfully pagan (they were believed to contain the fertility of the grain over winter, before being ploughed back into the ground with the sowing of the new season’s crop), they were still making these things for harvest festival and including them in displays in church during my Christian upbringing. 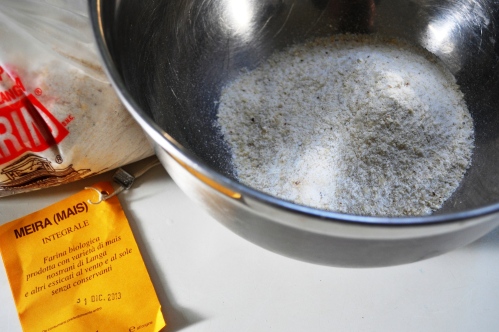 Anyway, here’s a maize bread. It’s not a cornbread, as that name’s already taken by a staple of the US South, and, well, this is a very different proposition. This one is based on a Dan Lepard recipe in his essential baking book The Handmade Loaf. Apparently Lepard was inspired by pane di mais of northern Italy. Which doesn’t surprise me, given the importance of maize and polenta up there, but I’ve never encountered a maize bread down here in Roma. He also talks about it being a “yellow bread”, but I made mine using Mulino Marino‘s ‘Meira’, which is surprisingly pale and white. With rustic dark bits – it’s an organic wholegrain (integrale) flour, made with maize dried by the wind and sun and stoneground, according to the spiel on the label.

Incidentally, some of the Mulino Marino range is now available in the UK through the excellent Bakery Bits online shop. I’ve got mixed feelings about this as I’m increasingly trying, as much as possible, to use the produce of the area I’m living in, or at least the country, as food transportation is a serious contributor to climate change. Although the 2006 book is dating, I highly recommend Michael Pollan’s The Omnivore’s Dilemma, which talks a lot about the fossil fuel factor in food production and transportation, and also goes into the horrifying story of how, at an industrial scale, maize has become an insanely inefficient and illogical (in calorie terms) primary crop. Indeed maize is the second biggest agricultural product in the world, with much of it used to produce high fructose corn syrup, a key driver of the obesity epidemics of the US and UK etc.

I’d like to imagine the maize that was used to make my Meira flour is a world away from the quietly apocalyptic industrial plains of maize in the US Midwest, China and Brazil. Certainly Italy’s not a major maize grower – despite the historical role of polenta here, the country is too generally mountainous to be caught up in modern industrial agricultural practises on the epic scale found in these larger nations. (In 2011, it produced around 9.7 million tonnes, compared to 313 million tonnes grown in the US. Source: FAOSTAT)

So yes. When I’m living back in the UK, the whole locavore thing is going to be an interesting challenge after living in Italy, place of eternal citrus and a umpteen flour varieties. (I am genuinely worried – the British weather was always haphazard, but climate change is really affecting it, with 2012 apparently devoid of a summer, and much of the British grain harvest ruined by the damp. “It’s been a soul-destroying year for farmers growing crops.”)

Back to the bread. 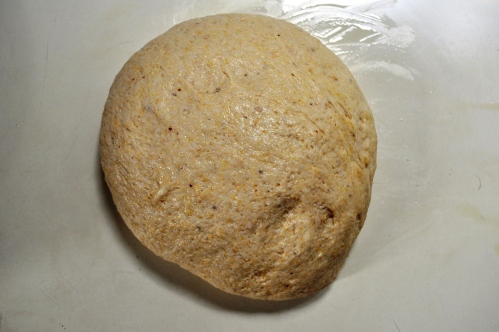 I’d made a version of this one before, almost exactly three years ago. That time, I used a Mexican style maize flour – masa harina. Reading about it all now, I realise that although masa harina and farina di mais are both basically flours made with maize grain, they’re very different propositions. The former has been made with grain that’s been “nixtamalized”: soaked with slaked lime. This alkali liquid changes the molecular structure and means the resulting flour is easier to make into a dough (notably a corn tortilla dough). It’s all a bit technical for me. I’m sure Jeremy Cherfas could explain the chemistry properly.

The Meira flour is more for polenta, I believe, and needs to be cooked up with water. Which I didn’t exactly do. Food for thought for next time. The bread turned out okay. Even if I’m still really annoyed with myself for losing my moulding mojo. A lot of the freeform bread I’m making at the moment just collapses when I take it out of the proving bowl or basket. This one was no exception. Furthermore, I’m not getting great oven spring. Grrr. Annoyed.

But it tasted good. And, Googling pane di mais now, even one of the Italian versions I found had the old discus form factor, so I’m not the only one (see this fairly low hydration one, made with 500g grano tenero 00, 300g maize flour and 450ml water). Another other Italian one, here, seems to be 100% hydration – 500g maize flour, 500ml water – though it appears to be tin-baked, with some nice oven spring. If it the one on the left of the pic. Not sure. Then there’s a very different version here, made in more of a challah form and flavoured with rosemary.

Anyway. Again. This post is getting long. People tell me not to write long and ramble, but sod that. If I can’t do it in my own blog post, and can’t me my true side-tracking self, what’s the point in blogging? 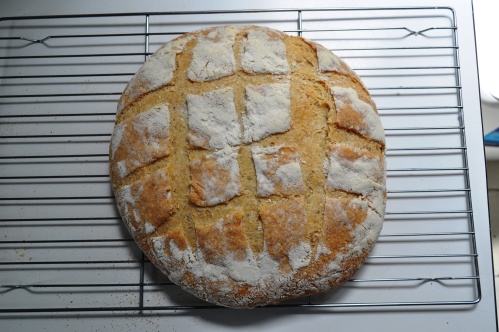 1. Mix together 50g polenta flour / farina di mais and 100g water.
2. Cook it together in a pan, stirring, then turn out to cool.
3. Crumble, squish and squash the polenta up into 300g warm water.
4. Add 60g yogurt and stir.
5. Add 15g fresh yeast (lievito di birra) and stir well.
6. Stir together 200g maize flour (in this case, Meira farina di mais), 300g strong white bread flour and 8g fine sea salt in a large-ish bowl.
7. Add the liquid to the flour and bring to a dough.
8. Knead reasonably well and bring to a ball.
9. Rest for about 10-15 minutes, then give it another knead.
10. Repeat this process 5 times, then leave the dough to prove for about half an hour, until doubled in size.
11. Gently form a ball.
12. Line a 25cm (10 inch) bowl with a cloth, rubbed with flour. Put the ball of dough, seam-side up, in the bowl and cover with the cloth. You can even use a shower cap over the bowl to keep the nice warm healthy fermenty atmosphere in, a tip I learned from my fellow ex-pat Roman baker Krumkaker.
13. Prove again until doubled in size.
14. Preheat oven to 220C.
15. Gently turn out the dough onto a baking tray lined with parchment sprinkled with more farina di mais or polenta.
16. Cut a grid pattern into the dough with a sharp knife or lame.
17. Bake for around 50 minutes. I turned my oven down to 200C after around 25 minutes, but every oven is different.
18. When baked, cool on a wire rack.
19. Eat – with lots of salad and your finest local cheeses. We had some great sheep and goat milk cheeses from the farmers’ market near the Circus Maximus. I always think of Charlton Heston and Ben-Hur when I’m down there, even if in that film the race took place in another circus, in Jerusalem, and even if Rome’s Circo Massimo is basically just a scrappy field with very little in the way of remaining structure. 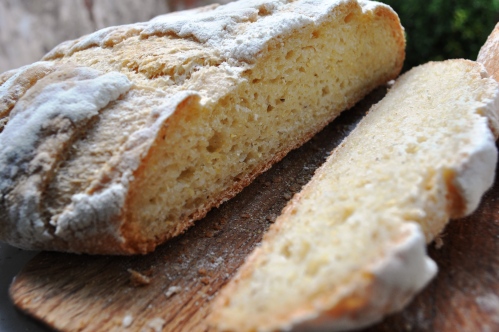