We’ve had some proper summer weather here in southern England the past few weeks. I’m quite shocked. It’s potentially looking like a good year for fruit too. All that rain in January-Febuary then a strangely hot and sunny spell in March might count for something in that department. Already our plum tree is sagging under the weight of ripening fruit, and out goseberry bush is starting to look ready to yield its sour green offerings.

I was planning to use the goosebrrries, a fruit I ate a fair amount as a child but haven’t touched for years, if not decades, for a tart yesterday, when we had friends visiting for lunch, but decided they weren’t quite ripe (the bush is in a very shady spot). Instead, the farmers market had a stall loaded with (ripe) gooseberries, cherries, strawberries and tayberries. I hadn’t encountered the latter before, but they’re a common blackberry (Rubus fruticosus)/raspberry (Rubus idaeus) cross. We bought a punnet, but mostly we bought strawberries as I’d seen a handsome looking recipe in Dan Lepard’s ‘Short & Sweet’. Another version of his recipe is available here on the Guardian.

It involves a slightly unusual custard, or sort-of custard. I’m not sure it’s a strict definition but I always assumed custard referred to things made with a mixture of milk or cream and egg yolk. This one, however, is made with egg white. Which is a typically nifty Lepard trick, as you use yolk in the pastry, and can then use up the leftover white. You make a mixture of milk, cornflour, sugar and the egg white, cook it till thick, then cool this, later on combining it with crème fraîche. Lepard uses a similar process for another of his custards, though that one does use yolks, then is mixed with double cream. It’s very handy.

1. Cut the stalky bits off the strawberries then slice into two or three or four, depending on the size of the individual fruit.
2. Put the strawberries in a bowl, sprinkle with caster sugar, then leave in the fridge to macerate, stirring occasionally.
3. Make the pastry by sieving together the flour and icing sugar, adding the salt then the cubed butter. Rub together until the mixture resembles breadcrumbs (you could do this in a food processor), then add the egg yolk and water and bring together a dough. Don’t be tempted to add too much water. A tablespoon or so should be enough. You want the pastry crumbling not sticky.
4. Form the pastry into a disc then wrap in plastic and rest in the fridge.
5. Combine the milk, cornflour, egg white sugar and vanilla in a saucepan.
6. Whisking well, put over a low heat. Continue whisking, increasing the heat slightly, until the mixture thickens. It can get pretty thick, so don’t get too carried away. And watch it doesn’t burn.
7. Put the thick mixture into a bowl, cover with a plate and allow to cool. Then leave in the fridge until you need it.
8. Roll out the pastry and use it to line a 25cm-ish pie or flan tin.
9. Preheat the oven to 170C.
10. Bake the pastry case blind – that is, covering the pastry with a lining of parchment and filling it with baking beans. I used to use my childhood marbles, but I’ve lost them (ahem), so currently I’m just using kidney beans. Bake for about 15 minutes then remove the beans and parchment and keep baking until the case is golden.
11. Allow the pastry case to cool.
12. Put the thick custard mix in a large bowl and loosen it up with electric beaters.
13. Add the crème fraîche and keep beating until it’s all nicely blended.
14. Put the crème fraîche-custard in the cooled pastry case.
15. Arrange the macerated strawberries over the top.
16. Serve. 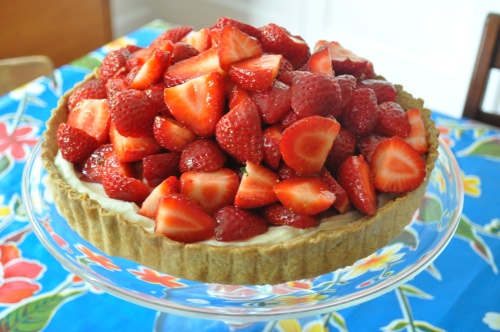 I was hoping we’d have a little of ours leftover but eight of us – five adults, three kids – demolished it in mere seconds. Well, a few minutes perhaps. All in all, it was a lovely end to a very satisfying lunch. For starters we did some fiore di zucca: battered, deep-fried zuccchine flowers, filled with mozzarella and a little anchovy. Then for the the main course we did honey-glazed roast chicken with lemon thyme and smoked paprika, a great Tom Kerridge recipe that can be found here; smashed new potatoes with mint; broad bean, pea and mint salad with Medita (our local version of feta, from High Weald Dairy); and a simple lettuce salad. The kids didn’t fuss about any of it – indeed, they demolished most of the mains in seconds too. Kids can really be the worst critics of food, so we were very chuffed with this result. Wish we’d taken a few photos.

All accompanied by local beer and incredible sunshine, and a post-prandial walk on Malling Down, part of the South Downs, an area that’s just received a special Biosphere status from Unesco alongside places like the Amazon and the Rockies, it was a wonderful day. Which compensated nicely for my disappointment about the 18th South Downs Beer & Cider Festival, which we’d attended the day before.