Galette des rois and celebrating the end of Christmas with Epiphany 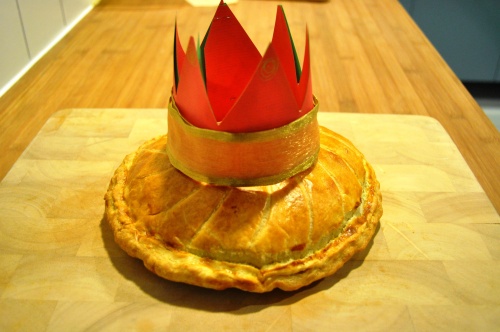 I love the Christmas season, but one thing I loathe about its modern British incarnation is how it begins in the middle of October. People start stressing, hurry to put up their trees at the start of December, then run out of steam by about Boxing Day, with some even taking down their decorations. Yet Boxing Day, the 26th, is only the Second Day of Christmas.1

We all know the song that starts “On the first day of Christmas my true love gave to me…” but miss the significance. Formerly, Christmas was celebrated from Christmas Eve and Christmas Day itself, when the feasting started and was sustained until Twelfth Night, 5 January, the eve of Epiphany. This ending of the season on 6 January is still celebrated in some cultures with king cakes, or kings cake. The kings in question? Why that would be the Three Kings, the Magi.

This is all perhaps a bit confusing for those who grew up with formalised Nativity plays and scenes that pack in the whole cast of characters – holy family, kings, shepherds, sheep, oxen, camels – for the actual birth of Christ. But alternative names for Epiphany are Three Kings Day, or simply the Day of the Kings, as it’s when they arrive at the famed Bethlehem farm outbuilding and give their gifts. Indeed, some cultures still do their main gift-giving on Epiphany. It’s an important Christian feast day, hence the feast foods: the king cakes.

The end of Christmas
Not only are variations on king cakes served on Epiphany, they can be served repeatedly through Carnival season right up until Lent, with the New Orleans version, for example, being essential for Mardi Gras, Fat Tuesday.

The northern French king cake – galette des rois – isn’t the richest concoction, but I still love how this tradition is one in the eye for all the hackneyed dogma that gets trotted out with the British New Year celebrations about how you have to stop indulging and embrace self-denial. Indeed, one of the things I loved during our two years living in Rome was how Carnevale brought with it uniquely indulgent seasonal sweets soon after New Year.

Before our time in Italy, the biggest connection to another European country and culture in our household came with Fran’s Francophilia. She’d made a connection with France when she was young, studied French, and spent several years living in Brittany and Paris when she was in her late teens and twenties. It was Fran who first told me about the galette des rois five years ago.

While southern French, parts of the US South and some Spanish and Latin cultures do a more cake-like king cake made with enriched dough, and decorated with coloured icings and candied fruits2, the northern French galette des rois is a more modest concoction. It’s a sweet pie, made with puff pastry (pâtes feuilletées) and filled with almond paste, frangipane; essentially a pithivier.

Cake, round and flat
What is a galette? Well, it’s defined as an “espèce de gâteau rond et plat” – “a type of cake, round and flat”. From what we can work out, it’s the diminutive of gale, again meaning a round, flat cake but also used to describe a small round stone, worn flat by water3. Alan Davidson says, “the word being derived from galet, a pebble perfect for skipping”. The word is perhaps best known from galettes brettonne, Breton galettes – pancakes made with buckwheat flour found in that region of northwest France. It also refers to certain types of biscuits and cookies, also round and flat.

Charming
Anyway, as well as being a modest treat, the fun thing about galette des rois is the inclusion of a fève – literally a dried bean (like the Italian word fava, broad bean). This is hidden in the frangipane mixture and bestows good luck on the person who finds it in their portion. As I noted in my earlier blog about galette des rois, this is not unlike the old British tradition of hiding a coin in Christmas pudding, and indeed lots of cultures have festive baked goods that include a charm of some form: it’s common to other king cakes, the Bulgarian banitsa contains a kusmeti charm, etc.

The modern form of the fève is a small ceramic or plastic figure of the baby Jesus. Last time I made one, I debated using a Monopoly piece but opted instead for a marble. This time, however, I decided to use something edible, so chose half a walnut. No danger of choking! The French tradition is for the youngest child of the gathering to sit under the table and call our names as the slices are served, for an added layer of chance. Whoever wins the fève gets to wear the paper crown you place on top of the galette des rois when you serve it and be the family king or queen for the rest of the day. Or nominate someone else if they’re not feeling the lure of such absolute authority.

The inclusion of a bean is likely a pre-Christian Roman tradition, when for one day in winter slaves and masters would eat together, and even the slave could be king of the feast, or at least the magister bibendum, “master of the drinks” or toastmaster. As Davidson points out, when the pagan Roman empire was Christianised, it made sense to declare 25 December Christ’s birthday, “co-opting these immensely popular holidays” and midwinter ceremonies, notably Saturnalia.

Recipe
This time round I also made my own puff pastry, using a recipe from the new 2011 translation of Ginette Mathiot’s The Art of French Baking (originally Je Sai Faire La Patisserie, “I Know How to Make Pastries”, 1932). It was okay, not great. Partly it didn’t puff well as I messed up the edge of the galette; that’s a tricky bit, as you need to seal it well to contain the frangipane, but not to the point of preventing any rising and puffing of the pastry. Anyway, most people will probably prefer to just use bought puff pastry – if so, make sure it’s all-butter as the richness and flavour is essential.

1. First make the frangipane. Combine the almonds, sugar and pinch of salt.

2. Add the softened butter and squash it in, then cream it in fully. Keep creaming until the mixture becomes a paler colour.

3. Add the beaten egg, a little at a time, and the rum (if using) and beat to combine. Cover and put in the fridge while you prepare the pastry. 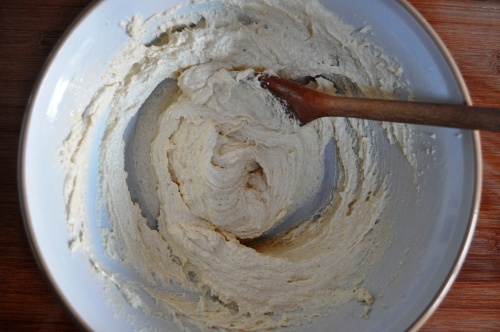 4. Line a baking sheet with parchment.
5. Roll out the pastry then, using something round that fits your baking sheet, cut two discs. Mine were 230mm (9 inches) in diameter. 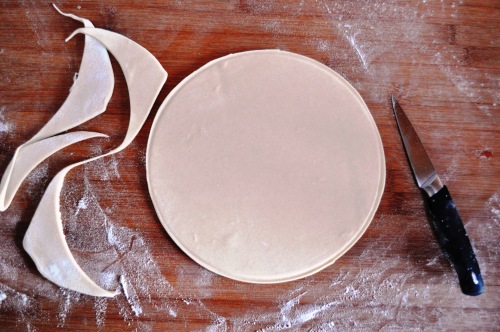 6. Put both circles on the baking sheet with another piece of parchment in between, cover with plastic to stop them drying out and rest (them, not you) in the fridge.
7. Whisk together the egg yolk and milk for the wash.
8. Take the pastry and filling out of the fridge again and separate the discs.
9. Put the almond filling in the middle of the bottom piece of pastry, leaving about 25mm all the way around the edge.

10. Put a fève in the mix, making sure no one sees where it’s hidden.
11. Brush the exposed edge of pastry with water, put the other disc of pastry on the top then seal together tightly.
12. You can chill again now, leaving it until ready, even overnight. Again, cover or put in a plastic bag to stop it drying out.
13. Preheat the oven to 200C.
14. Brush the glaze all over the top.

15. With a sharp paring knife, cut a pattern on the top. Traditionally, this involves diagonal lines or curving sunrays, but you can be as creative as you want. Stab a few holes too, to allow steam to escape. You can scallop or crimp the edge too, but see the above note.
16. Bake for about 30 minutes or until crisp and golden. (As soon as it’s out of the oven, you can also give it an extra glaze with sugar syrup.) 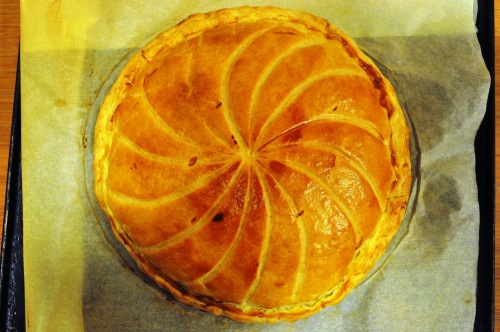 17. Serve warm or at room temperature, topped with the paper crown.

And forget about those silly New Year’s pronouncements to punish yourself for overeating over Christmas. Just moderate! So, for example, don’t eat an entire galette des rois on your own, greedily trying to win that crown. Fran got it – or half of it at least, a flaw in the plan of using a walnut – in her first slice.

1 Most count Christmas Day as the First Day of Christmas, though some start with 26th December, St Stephen’s Day, the British Boxing Day. If you follow the Julian calendar, you have to wait until 6 January to start the Twelve Days of Christmas. Thanks Alex and Nick for informing me of that with your Ukrainian Christmas celebrations on our Epiphany, yesterday.

3 Fran also conjectures that the word relates to the Gaelic gall, which means “stranger”, but also “rock, stone” but it all gets a bit confusing when you learn the Breton language name for Breton galettes is Krampouezhenn gwinizh du.

My folks visited at the weekend, and brought with them something given to them by some friends who live in Normandy, who bought it in their local patisserie – it’s a brioche des rois, another variation on the kings cake theme. None of us were sure what the red slices of candied fruit were – apple perhaps?