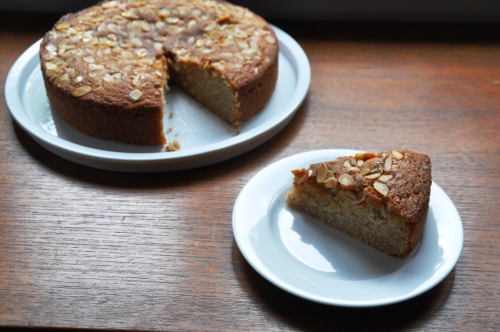 I love cakes made with ground almonds. And I love cakes with sweet syrups poured over them after baking. So this cake is a result – it has both.

It’s from a recipe by Gill Meller, now group head chef of Hugh Fearnley-Whittingstall’s River Cottage operation. As with my last syrupy cake, revani, it’s a recipe I got from the paper several years ago. It’s one I strongly associate with my parents’ place in northwest Devon, as the original newspaper cutting lives in a file there, along with some notes about what’s not quite right with it. Notably, the version as it appeared in the Guardian had too much butter in it, which seriously leaked out on baking. The version on the River Cottage site reduces the butter and increases the oven temperatures. For our family version, we reduce the butter even more.

The original also uses self-raising wholemeal flour – something that’s not especially common, so you can replace it with plain wholemeal flour and a bit more raising agent. But watch it with the baking powder. See notes below. More specifically I use a low protein (less than 10%) wholemeal flour, as opposed to a higher-protein bread-making wholemeal flour (12% plus). It would work with bread flour, but might be slightly heftier. As it is, it’s surprisingly soft for something so brown and branny. 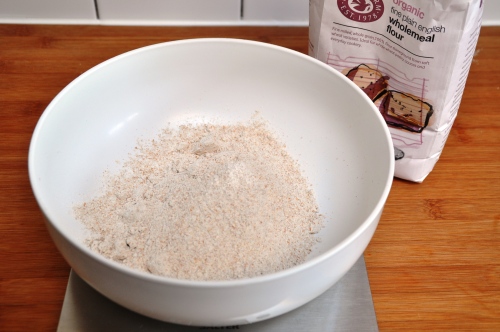 Not gluten free… but it could be
On the flour note, anyone who reads my blog will know I don’t generally have problems with modern common wheat (Triticum aestivum) and gluten. I prefer locally grown and/or stoneground where possible, and I find that as long as I don’t eat industrially made wheat products – specifically that paragon of bad modern food, white sliced – I’m fine.  For those of you who like, or have to, avoid modern wheat, I suspect this cake could work pretty well with either older wheat such as spelt (Triticum spelta), which has less starchy endorsperm and less gluten.

It may even work with alternatives to grass/cereal flours (wheat, rye, barley, oats etc), such as pseudocereal buckwheat (Fagopyrum esculentum). I’ve put the latter on my shopping list as it’s a foodstuff I enjoy for its own merits and want to try for this cake. Half-buckwheat, half-ground almonds sounds pretty good to me. 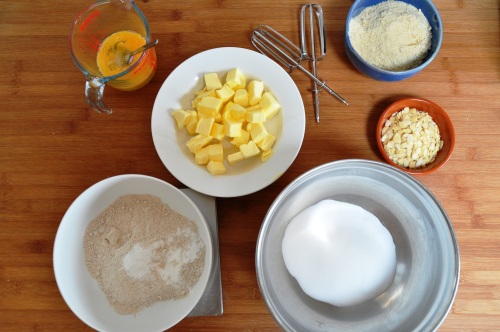 1. Preheat the oven to 170C.
2. Grease a 23cm (9″) diameter springform cake tin and line the bottom with baking parchment.
3. Cream together the butter and sugar until light and fluffy.
4. Beat in the egg, a little at a time.
5. Beat in the ground almonds. 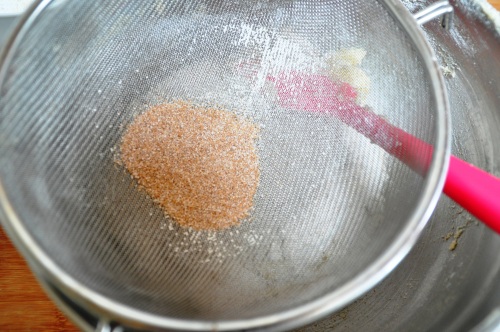 6. Sieve together the flour, baking powder and cinnamon, add a pinch of salt, then fold this in too. Sieving lightens and combines, but also removes the bran. The bran is good, rich in dietary fibre, protein, B vitamins and various minerals (including iron) – so chuck it into the mix too!
7. Put the mixture in the tin, scatter the 40g flaked almonds over the top. Place on a baking sheet (it may still leak some butter) then bake for about 1 hour, until a knife or skewer comes out clean. As long as the top’s not charring, it’s better to overbake this cake than underbake it. It’ll be more stable and the almonds and honey will keep it moist.
8. Warm the honey in a saucepan. I weigh mine straight into a pan, to avoid any sticky complications. Plus, if you only have set honey, heating it will make it runny, and if you’re using runny honey, it’ll make it runnier, so it’ll seep through the sponge better. While the cake’s hot, drizzle over the honey.
9. Place the tin on a wire rack to cool. Serve warm with cream, ideally clotted, for a pudding or at room temperature at teatime. 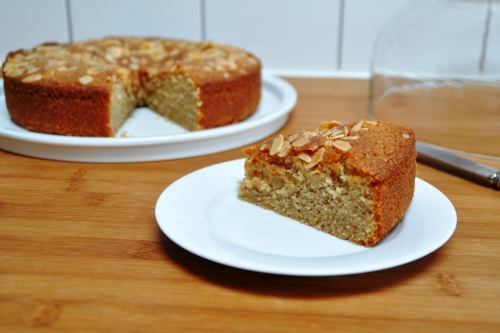 Excuses excuses
I’m not going to deny I got some sinkage in the middle on the cake photographed here. It doesn’t affect the taste of course, but in terms of aesthetics, and perfectionism, it’s annoying. That said, if you look at F-W’s version on that Guardian page, it’s sunk in the middle too, so I’m in good company.

Potential causes of cakes sinking in the middle are:
1. Too much raising agent. It can cause cakes to over-rise then collapse.
2. Not baked quite long enough. However, if the cakes is pulling away from the edges of the tin and a skewer comes out clean, it generally means it’s done.
3. Overbeating the mixture.
4. Wholemeal flour is trickier than white flour. With all that (lovely, nutritious) bran and whatnot, it doesn’t lend itself to retaining a nice delicate structure.

I’m going with option 4, with a bit of option 1 on the side, for today’s excuses. I’ve made this cake again since this entry, and reduced the baking powder again and had much better results.