Lots of bloggers and columnists have offered recipes for “the ultimate chocolate chip cookie”. I’m not sure it’s entirely possible to nail a perfect version of the quintessential US cookie and, well, it’s fun to play around with recipes. I’ve been experimenting with adding more chips and nibs. Others before me have taken the triple chocolate chip cookie as a starting point for quadruple and quintuple, so I’m not claiming any originality here, just having fun.

Let’s be clear, the quintuple here means there are five types of cacao-based product: three types of chocolate chunks, nibs and cocoa powder. When I say cacao-based product, I mean things derived from the Cacao theobroma tree. The tree is a native of Central and South America, famously beloved of the Aztecs, appropriated by imperialist Europeans and now grown from Ghana to Vietnam. I talked more about Cacao theobroma and nibs in this post, so won’t go on about them again.

Into the woods
We ate this batch while having a lovely walk in the woods: Friston Forest in East Sussex. After saying in my previous post about how awful the weather has turned, we’re having a week of gorgeous sun. Friston Forest is lovely; I particularly enjoyed a moment where we walked up a shady path then were suddenly in a clearing that offered a view that was full to the horizon with trees. This isn’t something that happens very often in East Sussex, a part of England that’s fairly populous, heavily farmed or defined by open Downland scenery, not forest. 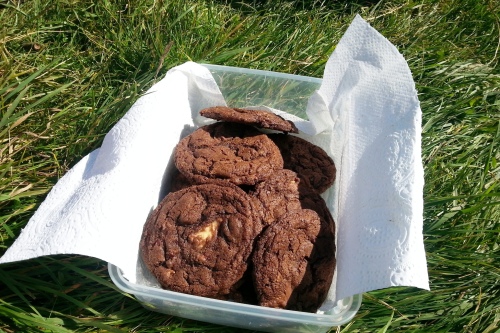 So it was a day of treats – cookies, sunshine, woody views and even a pretty decent pub lunch at The Tiger Inn in East Dean (not to be confused with the East Dean in West Sussex), opposite Sherlock Holmes’ retirement house no less. 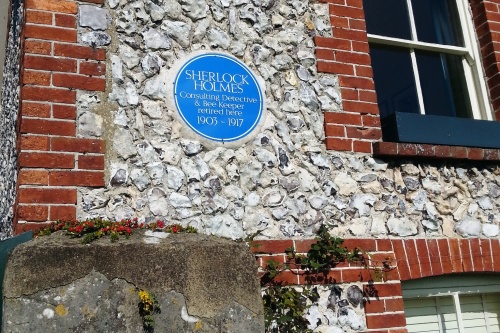 The only disappointment was the lack of edible fungi. Perhaps the woods – largely a mix of beech, sycamore and ash on thin soil over chalk – just aren’t that suitable. But that’s OK, it’s all part of the process of finding a good spot for foraging.

Fridge-aged dough
This recipe is based on Dan Lepard’s dark chocolate chunk cookies, in his book Short & Sweet. Rather than using the following technique and baking them straight away, he says you can also use the US or even German technique1 of forming the dough into a cylinder and fridge or even freezer for later.

An article in the New York Times in 2008 asserted that this improves the quality of the finished cookie, allowing the flour to soak up the liquids and fats. Felicity Cloake in the Guardian did her own tests on this and said the dough kept longest in the fridge (48 hours) resulted in a more “caramelly” cookie, while those kept 12-24 hours had a preferable texture. I’m not entirely convinced though, especially when you’re adding cocoa powder to the mix.

1. Preheat the oven to 180C and line some tray with baking parchment or silicon sheets.
2. Cream together the butter and sugar.
3. Add the egg and vanilla essence, and beat to blend.
4. Sieve together the flour, cocoa powder and bicbarb then add this to the batter, along with the pinch of salt.

5. Add the chocolate chunk and nibs and bring to a dough.
6. Form balls. I scaled mine at 35g each, which resulted in 22 cookies.
7. Place the balls on the prepared sheets, well spaced about as they spread.

8. Bake for about 12-14 minutes. Less = chewier, more = crunchier, according to taste.
9. Allow to firm up slightly on the trays then transfer to a wire rack to cool completely.

Enjoy. Not necessarily on a walk in the woods. With a teatime cuppa or evening hot chocolate in the comfort of your own home is good too.

Footnotes
1. In the Oxford Companion to Food, in his entry for “Cookie”, Alan Davidson writes “The American habit of making rolls of cookie dough and and keeping them in the refridgerator or freezer may have come from Germany; the doughs for some German biscuits such as Heidesand are made into rolls and chilled before slicing.” He adds they’re sometimes known as “‘icebox’ cookies”
2. Always bake with your eggs at room temperature. I’m not sure it makes any difference to taste but it does help when beating eggs into a creamed sugar and fat mixture, reducing the chance of curdling. It’s also better when making things that require the egg, or the white, to be whisked, as the warmer egg incorpates air more effectively. Personally, I don’t even store eggs in the fridge. Eggs have a great storage system already – it’s called a shell. If the egg is off, having it cold and off won’t make any difference.