Autumn has seized us now in the south of England with its cool, slightly soggy grip. We’re also going through a disheartening time in our adoption process, so it’s definitely time to embrace the comfort foods.

One such stodgy autumnal comfort food is cobbler. Cobbler is simply a variation on the theme of a pie – that is, a sweet or savoury filling covered with a flour-based topping or crust. But in this case, the crust consists of a scone-type mixture. A lot of cobbler recipes use a moist dough, put on top of the filling in the form of rough blobs. Somewhere along the way, however, I latched onto the idea that the mix should be a drier dough, rolled out, and cut like scones, then put on top of the filling in a form more like shingles or roof tiles. Maybe it came from an old Katie Stewart recipe.

Stewart is one of Britain’s more unsung food writers, but her recipes in The Times in the 1970s and early 1980s, which my mother collected in a yellow binder, were another key part of my cookery education. Stewart even has a book called Wild Blackberry Cobbler and Other Old-Fashioned Recipes, published 1984. I don’t have it, so can’t verify my hunch that the tiled-style cobbler comes from her, but I am using some wild blackberries here.

It’s been a good year for blackberries, and we’ve had a few productive foraging sessions. This weekend just gone Fran and my mum gathered some more blackberries, along with rosehips and sloes, which we used to make hedgerow jelly.

They got the blackberries on the last day you’re supposed to pick them, according to one strand of British folklore: 11 October. Others say 10 October. These dates used to be when St Michael’s Day, Michaelmas, was celebrated. The Catholic calendar was, however, revised in 1752, and Michaelmas became 29 September. So some say that’s the last day you should pick blackberries. Michaelmas is supposedly the day when St Michael kicked Lucifer out of Heaven. Some say he landed on a blackberry bush and, angered by the thorns, cursed it, spoiling the fruit.

Either way, I’m using some of my blackberry jam made in August in this one, so I think we’re safe from any demonic saliva.

Fruit mix
1. Vary the fruit according to season, what trees you’ve got, what trees your friends or family have got, or what you can forage. Right now, in the thick of the apple harvest, I used 800g Bramley apples from a tree in my folks’ garden.
Peel, core and cube the apples, then stew in a pan with a dash of water and sugar to taste (I used 40g). 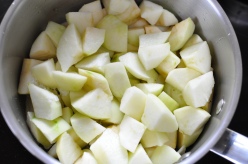 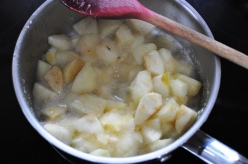 2. Cook until softened but not completely broken down. 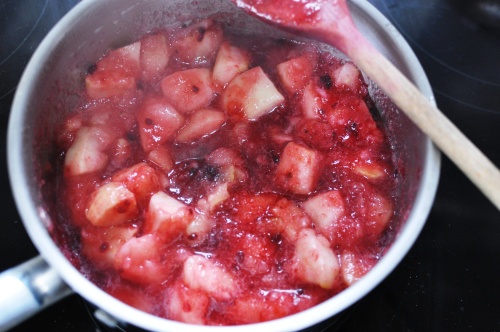 3. I mixed the apple with a few tablespoons of blackberry and plum jam.
4. Spread the fruit mixture in a 20x25cm ovenproof dish.

1. Sieve together the plain flour and baking soda in a bowl.
2. Add the pinch of salt and caster sugar and stir to combine.
3. Cut the butter up into small pieces, then rub in until the mix resembles breadcrumbs.
4. Mix together the milk and yogurt (you could use 160g buttermilk instead) then add this to the mix. 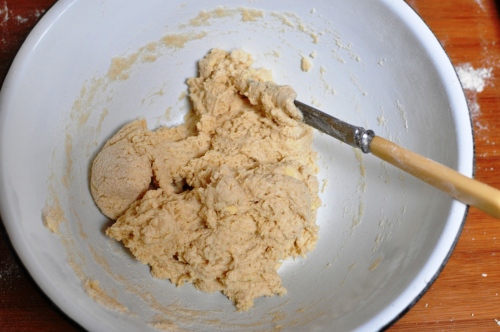 5. Bring together to form a dough, kneading very briefly. If you handle it too much it’ll toughen up.
6. Roll out the dough to about 12mm thick.
7. Using a cookie cutter, cut discs. I used one 65mm wide, but use whatever you’ve got.
8. Cover the fruit mix with overlapping discs of cobbler dough.

9. Brush the dough discs with milk and sprinkle with granulated sugar.
10. Bake until browned, about 20 minutes. 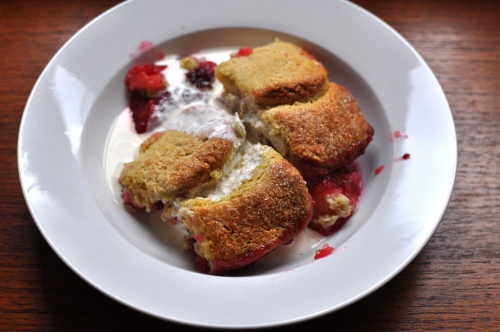