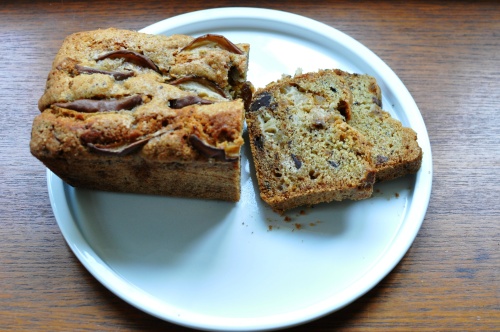 Last year, while we were making a lot of changes to our house and garden, I planted some fruit trees. One was a pear, a skinny little thing barely and metre and a half tall. Remarkably, this year it bore a good couple of dozen fruit. So many, in fact, a few branches broke from the weight. I probably should have shaken some off in June. Those from the broken branch, small and unripe, were poached in a red wine concoction back in August. Now, the rest have ripened and been picked.

The variety is Concorde, which the RHS describes as a “fine, compact dessert pear” and they’re very pleasant eaten straight. But browsing the Honey & Co Baking Book by Sarit Packer and Itamar Srulovich, I came across a pear cake so it seemed a perfect opportunity to bake with some of my harvest. 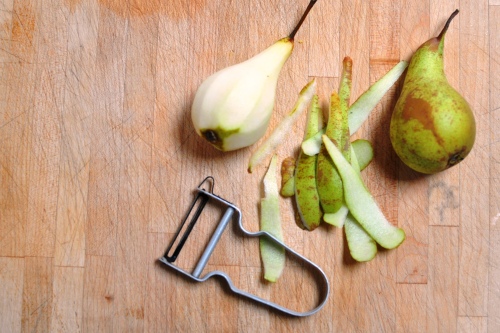 3. Peel, core and dice (about 8mm pieces) the two pears. Ideally they should be firm, but ripe.
4. Put the pieces in a bowl and add the lemon juice and zest, stirring it about to coat – this helps to stop the fruit browning while you make the batter.
5. In a large mixing bowl, whisk together the sugar and oil. 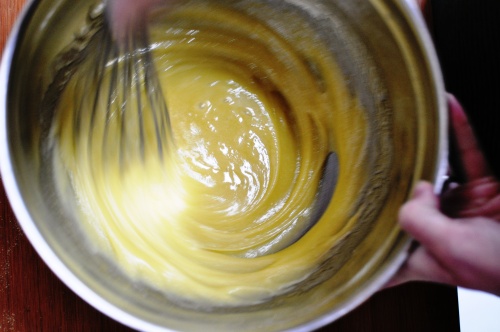 6. Add the egg and whisk until you have a thick mixture.
7. Add the diced pear and lemon, crystallised ginger and dark chocolate chunks. Stir to combine.
7. Sieve together the flour, ginger and raising agents then add this to the mixture, along with the pinch of salt.
8. Fold in until reasonably well combined. The Honeys say “try not to overwork the mixture – it is OK to have a couple of lumps.”
9. Pour the batter into the prepared tin and, with a damp knuckled, smooth the top.

10. Cut the final pear into wedges, arrange these on top, and sprinkle with Demerara sugar.
11. Put in the oven and bake for about 45 minutes. It’s a moist, fruity cake, and will take a long time to cook, but so you don’t burn the top, take it out, cover with foil, then return to the oven for about half an hour.
12. Insert a skewer to check if it’s done: does it still have damp batter on it? If so, return to the oven for a bit longer.
13. When fully baked, cool in the tin.

You can have it as a dessert, while still warm, with a blob of some indulgent dairy product (vanilla ice cream, clotted cream, double cream). Or cool fully and enjoy for breakfast or afternoon tea.

[Apologies for the photography in this post, which is even shoddier than normal. The days getting so short has caught me almost by surprise, and I was making this as night fell, resulting in some dubious non-natural lighting.]