Me and my wife Fran have been a couple for, blimey, nearly 17 years now. Through the years, Valentine’s Day has always been a bit of an issue for us. I think it’s a load of old bollocks and try to ignore it, she buys into the notion that it should somehow be more romantic than other days and tries to make a thing of it. We usually meet in the middle – with a bit of teasing and bickering. Maybe she’ll give me a card and I’ll feign confusion.

It is a funny feast day, any genuine older traditions now lost into the spoon-fed, commercial morass. It’s the ultimate Hallmark holiday where sales of cards and bunches of red roses have a massive spike.

In Cattern Cakes and Lace (pub 1987), Julia Jones and Barbara Deer talk about the theory that it’s a modern incarnation of the Roman fertility celebrations of Lupercalia, transferred into an association with not one but two characters martyred in Rome in the 3rd century AD. The Catholic Encyclopaedia meanwhile says “At least three different Saint Valentines, all of them martyrs, are mentioned in the early martyrologies under the date of 14 February.” How confusing! “One is described as a priest at Rome, another as bishop of Interamna (modern Terni)”. It also says the Roman city gate now known as the Porta del Popolo was called the Gate of St Valentine in the 11th century. “Of the third Saint Valentine, who suffered in Africa with a number of companions, nothing further is known.”

The idea that St Valentine’s day was a Christianisation of Lupercalia was suggested in the 18th century and has been rejected by modern scholars. Instead, it’s suggested that the association of St Valentine’s day with romance arose in the 14th century, notably with Chaucer’s Parliament of Foules, which drew attention to the date as when birds partnered up:
“For this was sent on Seynt Valentyne’s day
Whan every foul cometh ther to choose his mate.”

Other medieval writers referred to the same avian motif. Clearly, modern society isn’t the only one to generate and perpetuate whimsical piffle. I’m not going to go on about it all here. If you’re really interested in such things, the Wikipedia page is, naturally, respectably comprehensive. Instead, here’s a recipe from Jones and Deer for some enriched dough buns.

Plums but not plums
The name “plum shuttles” might confuse – it doesn’t contain plums and what’s a shuttle? Well, Jones and Deer say “These buns are shaped like weavers’ shuttles”. It’s a nice idea, though if you look at a weaver’s shuttle, it’s longer and pointed at both ends. These are more bun-shaped. As for the “plums”, that’s just an older British English usage of the word used to cover not just fresh Prunus fruit, but also dried fruit such as prunes (dried plums) and raisins and currants (dried grapes).

There’s not that much sugar in this enriched dough but a high proportion of dried fruit makes for a notably sweet currant bun.

I found their dough a bit tight, so have increased the liquid. It also uses a lot of yeast, proportionately, and has a resulting short fermentation. I’ve reduced the yeast a bit, but if you prefer a really good, proper, healthy long fermentation time, knock it back even more.

1. Combine the sugar, yeast and water and leave to activate. The sugar really boosts the yeast so it should go seriously frothy. 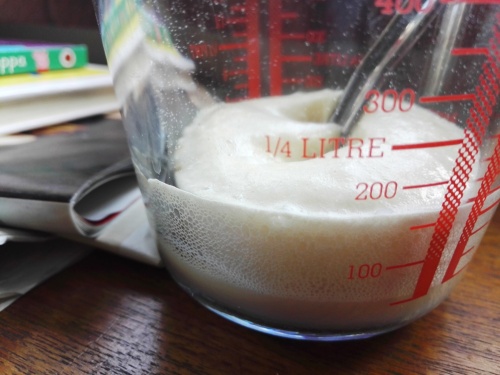 2. Warm the milk with the butter until the latter is melted. Leave to cool a little.

3. Put the flour and salt in a large bowl.
4. Add the yeast mix, milk and butter and egg to the flour mix and bring together to form a dough.

5. Turn out and knead until smooth.
6. Stretch out and add the currants. Fold the dough over and knead again to combine and distribute.

7. Clean and grease the bowl, return the dough, cover and leave to prove until doubled in size.

8. The total dough weight should be about a kilo (with slightly variation depending on the size of your egg etc). Divide this into 12 pieces scaled at about 84g each.

9. Form the pieces into balls, leave to rest, covered, for about 10 minutes. 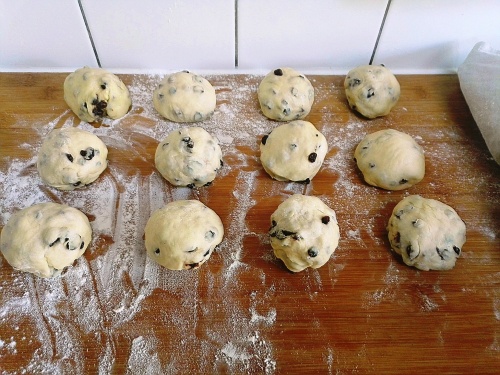 10. Stretch and roll these to form long ovals with pointed ends. Like weavers’ shuttles.

11. Place the ovals on lined or greased baking sheets, with plenty of room for expansion.
12. Cover with damp cloths and leave to prove again, doubling in size, or until a finger pushed in forms a slight dent.

Eat how you like – plain, with butter, with butter and jam or, if you really want to go crazy, add a load of whipped cream and pretend they’re maritozzi con la panna*. And of course, enjoy with your special someone… while arguing about what a lot of old nonsense Valentine’s Day is.

* Similar shaped Roman buns. Boy I miss Rome, especially at this time of year when it’s been grey and cold for weeks, and it’s apparently already 20C there. Bloody British winter. If we have a bad October and April, the British winter can last six months. Half the flippin’ year! We had sun today (see pic above) but it’s not due to last. Boo hoo.