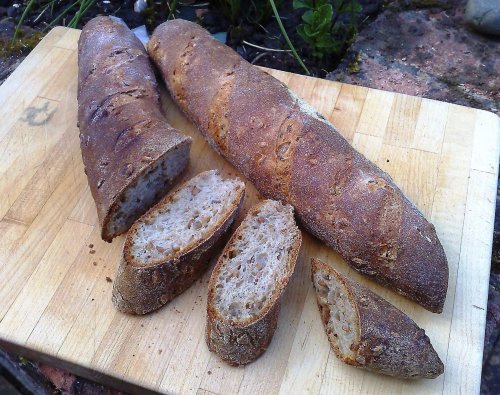 Very pleased with this one. It’s another recipe from Dan Lepard’s The Handmade Loaf, a book that’s kept me busy for many a weekend, and will doubtless do so for years to come. Although I’m yet to perfect my stick-shaping technique, the flavour was delicious, the texture nice and open, the crust crunchy without being tough or overly thick.

I finally got round to making a rye leaven. I simply took a few tablespoons of my wheat leaven, then started feeding it with 100ml of water and 120g of rye flour every day. After a week or so, it was looking pretty good, gassing away nicely.

This loaf is given distinction by the fact it uses not just a rye leaven, but also rye grains. Use about 120g of rye grains, then boil them for about an hour in water. Save the water, then put the rye grains in another bowl, and, when they’re cool, cover them with white wine and leave in the fridge overnight. This makes them nice and soft, and tangy. The recipe says you can also use yogurt or juice, but I used a Chardonnay we had hanging around. I really don’t like Chardonnay, so this seemed like a perfect way to use it up.

To make the dough, combine 25g honey, 4g crumbled fresh yeast and 325g water (use the water you cooked the grains in, made up with extra if necessary) in a bowl and leave it to sit.

Then add the wet yeast/leaven mix and combine by hand until you have a rough dough. Leave to rest for 10 minutes, then turn it out onto a lightly floured surface. Stretch it out a bit, and sprinkle with 1 1/4 teaspoons of fine sea salt and 25g of melted butter (or other fat).

Give it a turn after half an hour (ie, take it out, stretch it, then fold it in three). Return to bowl.

After this one and a half hour proving period, divide the dough up into five equal portions, of around 250g. Shape into balls, and leave to rest for 10 minutes.

Shape into batons by flattening out, then pulling the two corners opposite you out slightly and folding them towards the centre of the disc, sealing in. This will create a slight point. Fold that towards the centre too, and seal. Rotate, and do the same with the other side. Fold this in half, and seal. Buy Dan’s book – it’s got some very useful pictures of this process.

Let the batons rest for another 10 minutes.

To shape into sticks, take the baton, and fold in half again, along the length, starting at one end and sealing as you progress along the length. Roll on the work surface, and make pointy ends if you like that look. This is part of the baking process I’ve yet to perfect. The problem is creating a stick with a neat, tight seam, then not twisting it at all, so it will retain a regular shape when you bake. I guess I just need to make a few hundred more.

Lay the sticks, seam-side up, on a baking sheet lined with a floured cloth, making pleats of cloth between them so they don’t stick as they rise. Leave until doubled in height. The recipe says “1 hour”; that’s fine if you have a warm, moist environment, but my kitchen is quite open and cool so rising generally takes longer for me.

Carefully overturn a couple of the loaves, either on a baking sheet, or a peel (or substitute peel) if you use a baking stone. Slash the tops diagonally. As I use a stone, I then slide them into the oven, moistening it with a water spray. Bake for 25-30 minutes, then remove when they’re a nice colour, and sound hollow when knocked on the bottom.