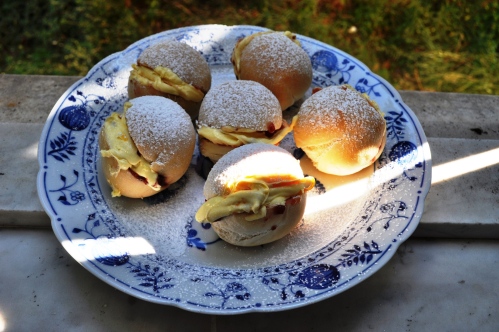 Among the few things we crave but are just impossible to source in Rome are halloumi cheese and clotted cream. For those who don’t know, the latter is a nectar-like dairy product that comes from the Southwest of England. Fran’s from the southwest and I have strong connections, so we both have clotted cream in the blood. So to speak. It’s an essential component of a proper cream tea.

I’ve always used clotted cream with scones, but it’s also used with a less well known variation the cream tea: with splits. When I smuggled a massive tub of clotted cream back home from Blighty last week, I resolved to make splits, and do a bit of a comparison with scones.

What is a split anyway? Well, it’s basically just a cream bun, made with a basic enriched dough, split and smeared with jam and clotted cream. (Messily smeared in our case – I’m a little ashamed we didn’t do it a bit more neatly, but then I’m no food stylist and we just wanted to scoff them!). As Rachel pointed out when we were doing just that yesterday, as it’s really not unlike a maritozzo con la panna. Though with slightly more demure amounts of cream. Sort of – clotted cream is cooked, so it’s denser and richer than whipped cream.

The next question involves their origins. Are they Cornish splits? Can they be Devonshire splits? Or is the Devon cream tea always based on the split’s easier-to-make cousin the scone? I’ve always assumed splits are actually “Cornish splits”, but then I started encountering recipes for “Devonshire splits”. What you call them probably just depends your loyalties. The white cross on black or the white cross on dark green? (Something that’s almost entirely irrelevant to people outside the spatting ground of southwestern England.)

And is there a difference between a Devon and a Cornwall version? Discussing splits, and Elizabeth David’s recipe, here Nigel Slater suggests Devon splits are smaller, though the recipe I based mine on was called “Devonshire splits” – and they’re quite big.

And why do these two counties get their knickers in such a twist anyway? After all, surely pasties and cream teas are from the West Country, not from either county in particular? Hey, I just love the West Country in general; I’ve been going there all my life and my mother’s mother’s family is from border country in northeast Cornwall/northwest Devon. Although there are cultural differences between Devon and Cornwall, there are plenty of cultural similarities too: clotted cream for starters.

This delicious treat is, frankly, from the West Country in general and neither county in particular. Especially not now in our industrial age when clotted cream is no longer produced by local farms and dairies but instead comes from larger producers like Langage (Devon) and Rodda’s (Cornwall) – both of which are available in supermarkets in both counties and beyond.

Anyway, I’ve made scones all my life and I even did a very scientific experiment to address the important question of whether cream or jam goes on first (includes recipe). This is my first go at splits though. They were very nice, but I’m not sure they’ll dethrone scones from my tea-time repertoire. For starters, scones are easier to make (just don’t overwork the dough!) and have a satisfying crunchy crust and crumby interior, which I found preferable to the more bread-like consistency of the splits.

1. Warm the milk and butter, melting the latter and bring the liquid to around body temperature.
2. Crumble the yeast into the liquid, and give it a whisk.
3. Put the flour, salt and sugar in a large bowl and stir to combine. (If you want to use easyblend yeast, add 10g now instead).
4. Add the liquid to the flour mix, and bring together.
5. Turn out and make a dough, kneading until smooth.
6. Put the dough in a clean bowl, and cover with clingfilm/plastic wrap.
7. Leave to ferment and prove until doubled in size.
8. Turn out, gently deflate and divide into 12 pieces – they should each weigh around 68-70g.
9. Form the pieces into balls, keeping them covered with a cloth.
10. Place the balls on a baking sheet, and again, keep them covered.
11. Let them prove again, for about 20 minutes, until they’re soft to the touch. (Time will vary depending on the temperature.)
12. Preheat the oven to 200C.
13. Bake the balls for about 15 minutes. Again, time will vary depending on your oven. You want them to start browning nicely on top.
14. Remove from the oven and cool completely on a rack.
15. When cool, slice the buns on a diagonal. Into this split (hence the name) add jam of choice and clotted cream.
16. Serve dusted with icing sugar.
17. Eat, messily. Whether you’re nearly two or 42.

I clearly lied in my last post about getting back to talking about Italian and Roman beer and baked goods didn’t I? Oh well – if it’s any consolation, we were sitting in a Roman garden, drinking prosecco, getting eaten by mosquitoes and being glowered at my our oddball neighbours when we ate these. 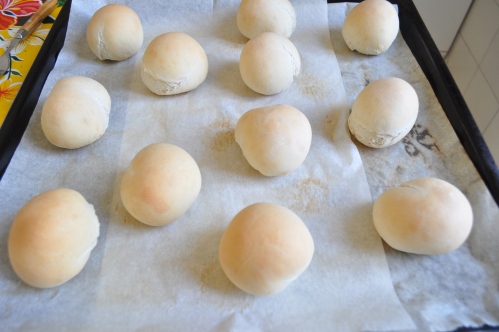 So it was a kind of English-Roman hybrid cream tea. But probably the best cream tea consumed in Rome for a while. I don’t make any bones about saying my scones are excellent, and good clotted cream is always awesome. Plus, well, Babington’s, the famous “English” tea room by the Spanish Steps, serve their cream with whipped cream not clotted cream – which is frankly just an abomination. No contest.