As you may have noticed, this beer-and-baked-goods site isn’t featuring much of the latter at the moment. Due to buildings works, we’ve not had a kitchen for a month, and probably won’t have one for another couple of months at least, so there’s not baking going on here. Instead, we have a pathetic electric hotplate and a basic microwave.

And can you bake in a microwave? No, you can’t. Not literally at least, as the verb to bake apparently has its origins, via the Middle English baken, the Old English bacan, the Old Norse baka, and even the Old High German bahhan, in the Greek phōgein meaning to roast, to parch, to warm. So in essence baking is a process based around heat, specifically dry heat. Microwaving, on the other hand, involves zapping the food item with energy from approximately the middle of the electromagnetic spectrum.

I didn’t grow up with microwaves, and only acquired one when a relative of Fran’s died about a decade ago. I know they’re an efficient way of preparing food, but if you take pleasure in cooking, it’s quite likely you take pleasure in the tangibility of real heat: from an electric element in an oven, from a gas flame on a hob. The latter particularly has a kind of primal immediacy, like a neat, manageable campfire. 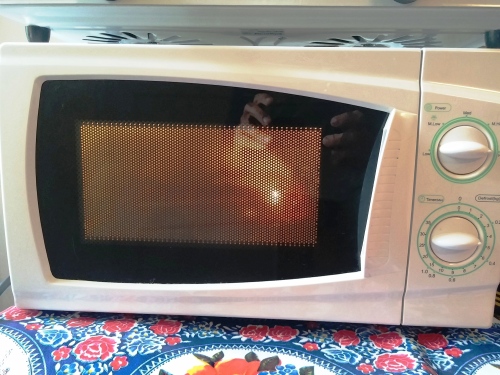 So having said all that, I must report I’m surprised at my first microwave cake. How can you make a cake without baking it? I can’t really reconcile that, yet the mixture I made was a pretty normal cake mix, and it was cooked in the microwave in about five minutes, and the results are most definitely a cake. Not a good cake, but definitely a cake.

It’s not all good news though. What makes it not a good cake is a certain dryness, a weird airy homogeneity, a lack of depth of flavour and a slightly dry, ashy mouthfeel. Though the latter may be partly explained from the relatively high amount of baking powder in this recipe. Some jam and ganache, or even some standard water icing, might mask that, and compensate a bit for the dryness, but it’s definitely not as good as a real, proper, baked-in-an-oven cake. Nuking all the water molecules to cook the batter is no substitute for real heat.

But while I’ve not got an oven, it’ll have to do.

1. Grease and base-line a 22cm microwave-safe cake container. This could be a glass dish or a silicon cake pan.*
2. Sieve the flour, cocoa and baking powder together into a mixing bowl.
3. Stir the sugar into the flour mix.
4. Whisk together the sunflower oil, hot water, eggs and vanilla essence in a jug.
5. Pour the liquid mix into the dry mix and combine well to break down any dry lumps.
6. Pour the batter into the prepared pan or dish.
7. Cover with clingfilm (aka plastic wrap). This is the bit that freaks me out. Making a cake? With heat? With plastic?

8. Put the pan or dish in the microwave and hit it at max power. Time will depend on your microwave. Mine is 700W, and it took seven minutes. If yours is 800W max, it may only take 5 or 6 minutes. Peel back the plastic and check with a skewer to see if the cake is cooked fully. If not, nuke it a bit more.
9. Remove from the microwave and allow to sit for about five minutes. 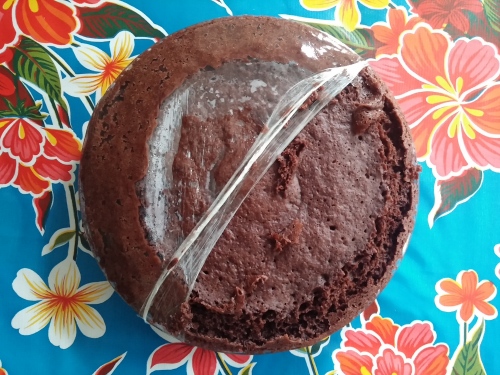 10. Run a palette knife around the edge then turn out and allow to cool completely.

11. Decorate with ganache, or apricot jam and melted chocolate and butter like a sachertorte. Plain like this (above) it’s a bit dry.

* I tried to buy the latter, a silicone cake pan from a brand called Zeal. Unfortunately it didn’t say whether it was microwave-safe. I assume it would be, but don’t know enough about microwaving to be certain. So I didn’t buy it. I’ve emailed the Kitchen Innovations, the company behind the Zeal brand, but they’ve not replied. Got to love a brand that communicates with its potential customers.