In 2007, Fran and I went to Mexico. We had a few weeks in the city of Oaxaca, in the state of Oaxaca, in the southwest of the country. Wandering the amazing indoor markets there, with their coloured fabrics, leather goods and teetering piles of red grasshopper snacks (chapulines), we discovered tlayuda, or tlayuda Oaxacqueña.

Tlayuda has been dubbed the “Mexican pizza” as it’s superficially similar – a wheat-based disc and toppings including stringy cheese. It’s made with that quintessential Mexican food: the tortilla, an unleavened flatbread, compared to the leavened dough of pizza. And also unlike the most familiar pizzas, with their tomato sauce1, the basis of the topping is beans, refritos.2 The pizza comparison goes further because of that stringy cheese, though real tlayuda Oaxacqueña uses a unique local cheese, queso Oaxaca, or quesillo.

Spun cheeses
Queso Oaxaca is made with the same technique as mozzarella, giving rise to that stringy texture. This involves the heated curds being stretched and rolled into balls, not unlike balls of spun yarn. The technique is called pasta filata, which could be translated as “spun paste”. The queso Oaxaca may indeed be related to mozzarella, there’s a suggestion on Wikipedia (with no sources to back it up) that it was brough by Dominican monks, presumably Italian Dominicans. Whatever the history of the cheese, it’s great. Though not exactly readily available in England. Even Tomasina Miers’ Mexican street food chain, Wahaca (see what she’s done there?) just used mozzarella, if memory serves.

Miers she has a recipe for tlayuda here, and for the base she just suggests “large Middle Eastern pittas, Turkish or Italian flatbreads” in lieu of wheat tortilla. This seems a bit of a cheat to me, never mind the fact that most supermarket flatbreads are full of crap industrial ingredients and palm oil. Plus this blog is all about baking from scratch!

So I’m making my wheat tortilla; it’s pretty straightforward. Traditionally these would be made on a comal – an earthenware or cast iron flat griddle. As my kitchen isn’t equipped with a comal, I’m just using a heavy cast iron skillet. It means the tortilla aren’t that big, diameter-wise, but it’ll have to do.

You’re best off making the refritos first, as they take some time. You could speed up the beans a bit by using a tin, but I prefer to cook from dried. 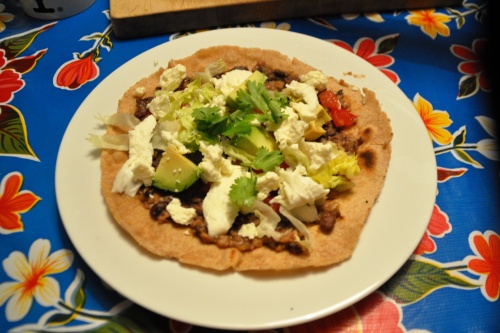 Toppings
As with a pizza, you can vary your tlayuda toppings, but I’m trying to re-create what I remember eating.

Although Fran ate hers with shredded meat, I had them with just the refritos, salad – tomatoes, crisp lettuce, avocado – and the cheese.

You can add some salsa to the mix too, or some coriander (cilantro) leaves.

Refried beans, frijoles refritos
Most commonly these are made with pinto or black beans, though I’ve also done them in kidney beans. In fact, all three of these, along with flageolet, borlotti and haricot (aka navy) beans, are the same species, the common bean, Phaseolus vulgaris, transformed into distinct looking cultivars after years of selective breeding. Again, as I prefer to use local ingredients where possible (though we can’t grow avos in England, dammit!), I’m using red haricots from Hodmedod’s.

1. Soak the beans overnight, discard the water, then put in a saucepan along with the coarsely chopped onion and whole garlic cloves, cover with water, bring to the boil and simmer until tender.
2. Drain, reserving the cooking water.
3. In a large frying pan, fry the finely chopped onion and crushed garlic in the oil or fat until soft.
4. Add the cooked beans, and fry over a low heat. If it’s too dry, add some of the cooking water.
5. Squash and crush the mixture with a fork or potato masher. You can make a puree with a blender, food processor or stick blender (aka zizzer) but I prefer the more varied texture you can from hand-mashing. Add more of the cooking liquid to achieve a nice sloppy consistency but not too runny.
6. Keep warm while you prepare the rest of the tlayuda, or re-heat when required.

(I did take some photos of the refritos, but frankly it’s not the most attractive-looking thing on its own and I simply don’t have the inclination or skills to make it look fancy.)

Wheat tortilla
As I understand it, tlayuda is always made with wheat tortilla, not corn (maize) tortilla. I’m using a mixture of wholewheat and white flours, both stoneground, and both low protein. The amount of water I give is just a guide, QB. The exact amount will depend on how absorbent your flour is.

1. Combine the flour and salt in a mixing bowl.

2. Add the oil or fat and combine. If you’re using a solid fat, crumb in it. Either way the result will be crumb-like.

3. Add the water a little at a time to form a moist but not sticky dough. Bring together as a ball. The dough should weigh about 400g.
4. Wrap in plastic or cover with a cloth and leave to rest for 20-30 minutes. 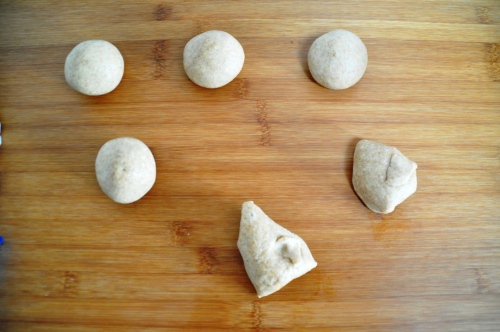 5. Now, the size of your skillet will decree how big you can make your balls of dough to be rolled into tortilla. My skillet is only 23cm wide, so I made 6 balls of dough at about 66g each. Again, once you’ve formed the balls, give them a rest, covered.
6. Warm up the skillet, dry – don’t oil it.
7. On a floured work surface, roll out the balls. The dough should be about 2mm thick.

8. Cook the tortillas one after the other turning them over when they start to blister. It’ll only take a few minutes each side. Cook them too long and they go crisp, or hard.
9. Keep the rolled tortillas in a stack, under a clean cloth.

Assemble your tlayuda
Cut up your salad ingredients – dice or slice the tomatoes and avo, shred the lettuce. Bring the mozzarella to room temperature and tear it in rough shreds; crumble the other cheese. Prep some coriander leaves if you want.

Take a tortilla. Smear it with refritos. Dose it with the torn mozzarella. Sprinkle over some of the crumbly cheese. Add some shredded lettuce, and some slices or tomato and avocado. Try not to completely overload it.

I don’t remember the tlayuda we ate being spiced or heated up particularly. But if you like chili, and can’t bear the idea of eating something nominally Mexican but without any chili, feel free to add some fresh slices or chili, or whatever Scovillage your favour. We had such a good chili harvest this week I added a little mild chili (apache) to the refritos, but it’s up to you.

Footnotes
1 Any pizza with a tomato sauce is called pizza rossa (red pizza) in Italy, though it also specifically refers to a very basic pizza – just base and sauce. Pizza bianca (white pizza) refers to any pizza that doesn’t have a tomato sauce, though it also refers specifically to a snack – very popular in Rome – that is just the flatbread itself, seasoned simply with the olive oil and perhaps a sprinkle of course salt.
2 Wikipedia says refritos actually means “well-fried beans”, not “refried beans”, as we’ve been led to believe all these years.
3 So yes, I’ve heard of Monterey Jack, and I’ve encountered a bright orange stuff that often comes in plasticky slices and gets called “Cheddar”. This is problematic if you’re English, as Cheddar is an actual place in the west of the country, and the traditional cheese produced there is a hard, full-fat cow’s milk cheese that is undyed, uncoloured. I don’t know why real cheddar doesn’t have an European PDO (protected designation of origin) status, or similar. I suppose the name has become so synonymous with generic hard cow’s milk cheeses now it’s too late to re-educate people and protect it.