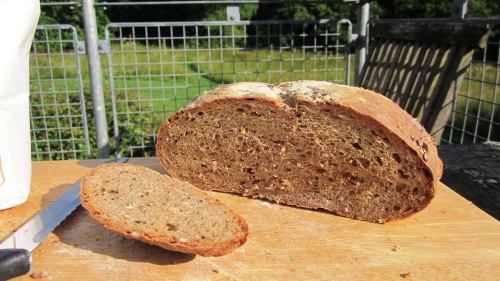 After my recent problems with bread-making at home in Rome, I was keen to try and make some bread during my visit to England last week. Although everyone kept telling me they’d just had three weeks of sun and 30C+ temperatures, when I arrived the British weather returned to form. I left the heat of Rome and was met by rain and grey at Gatwick. (There was one day when it was hot and sunny again, but I spent most of it in transit: on a train, then waiting for a very late-running bus, then waiting on the roadside in a village in the middle of nowhere in Devon when said very late bus broke down. Overheated.)

Eventually I made it to my folks’ place in the middle of nowhere in another part of the Devon countryside. I visited the local town, Holsworthy, bought some flour and yeast, then made some bread. That day, the weather was mixed and barely more than 20C. So nice and familiar and manageable, unlike the 40C ish Roman inferno.

The flour I bought was Wessex Cobber Bread Flour from Wessex Mill. Now, for those without even a passing knowledge of English history (or the literature of Thomas Hardy), Wessex is an ancient English kingdom, where the West Saxons (Wes-sax – geddit?) not only conquered neighbouring Anglo-Saxon tribes, but also fought the Vikings to a standstill under Alfred the Great, effectively creating the first version of an English nation in the 9th century. Or at least that’s my précis. Proper historians who would probably tell it differently, but I have Wessex campanilismo. Either way, Wessex, unlike Essex and two Sussexes, no longer exists as a county. Though at its height, it did dominate much of Devon, a region then mostly still inhabited by Britain’s older, “Celtic” inhabitants. Anyway, the point I’m making is that although it wasn’t a local flour brand, it wasn’t that far away from being local.

Except that when I read the packet more closely it said that because of Britain’s poor cereal yields in 2012 (ruined by the non-summer), the flour was instead milled from Canadian grain. D’oh. Seriously, when I leave Italy and return to tediously supermarket dominated and tragically climate-change-ravaged England locavorism is going to be an interesting challenge. Here in Rome I can buy numerous flours ground from grains grown in neighbouring regions.

I went ahead and made some bread anyway. Wessex Cobber Bread Flour is a roller-milled wheat flour, containing some barley malt flour and malted wheat grains. The type of bread it makes is more commonly known in the UK as “Granary”, but Granary is in fact a trademarked malted flour owned by Premier Foods, owner of the Hovis brand. So much like you can’t call a Kölsch-style beer “Kölsch” unless it’s made in Cologne the right way, you can’t technically call a Granary loaf “Granary” unless it’s actually made with Rank Hovis flour.

For this bread I used the reliable proportions of 1000g flour / 700g water / 20g fresh yeast / 20g fine salt, ie 70% hydration, though I tend to halve that for a smaller loaf. And I just did a basic bulk fermentation, proving twice until doubled in size. No flies were included in the mix. 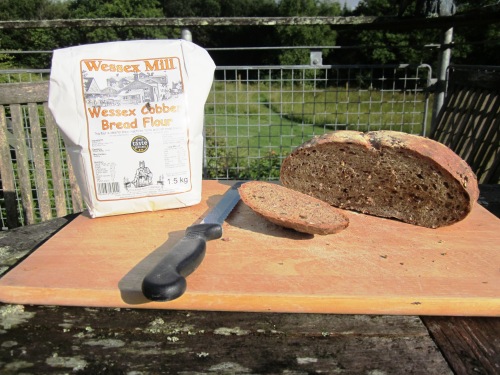 The results were a bit dense, but it was moist and chewy, and after a few days I didn’t get any of the problems I’ve had recently in Rome with the centre of the loaf damply disintegrating. Although that still doesn’t help me diagnose said problems.

Oh and I’m not entirely sure what a cobber is. I’m guessing it’s a dialect variation on cob, the more common British English name for a round loaf, equivalent to the French boule. It rings a bell. Though the main usage of cobber that springs to mind is the Australian English for “mate, buddy, chum”.