Burger buns with a twist 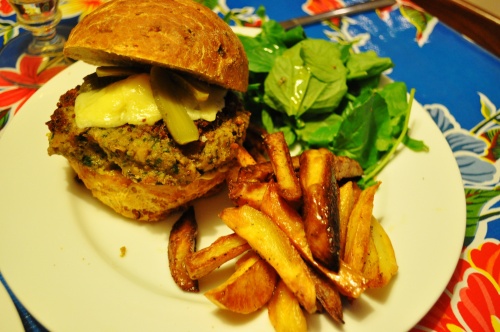 Over the past few years, the UK street food scene has improved markedly. Artisan producers, in part inspired by the US street food scene, have started producing real food from food trucks – a world away from the mechanically separated burgers, listeria buffets and industrial crap that has dominated here for so long.

The other day I was in Brighton and went to the Street Diner, a Friday street food market in Brighthelm Gardens, Queen Street, BN1. It started up exactly a year ago and is now operating Saturdays too I believe.

As well as various Asian and Middle Eastern-inspired food stalls, there was enough pulled pork, brisket and burgers to satisfy my carnaholic wife Fran and brother-in-law Al. No street food scene is complete without burgers of course. As much as I adore the form factor of a burger in a bun, I’m not a carnaholic, so went for something Middle Eastern. But the next day, back in Brighton to meet Fran, I thought she might be craving burger, so did some investigation into Brighton’s best.

Burgers in Brighton
This seems to be such an important subject, there’s even an entire blog dedicated to it (here). So yes, we couldn’t possibly hope to get to the bottom of the Brighton burger scene straight away, so just plumped for Troll’s Pantry. They’re one of the most established of Brighton’s burger outfits, emphasising a use of local ingredients and operating out of the Hobgoblin pub. Which is all well and good, but on a Saturday evening, the latter wasn’t exactly a joy. It felt just like some dodgy student pub from my uni years in the 1990s, stuck in grubby aspect. And even though they have half a dozen or so handpumps, most of them were off. Don’t they have any actually trained to change cask on their busiest night?

The burgers themselves were excellent though. They’re served, US-style, in a plastic basket and a brioche-style bun. Chips – or fries, if you must – extra. I had a veggie one, Gaea’s Bounty, that was tasty, and Fran said her beef job, the Imperial Swine, was excellent.

“All beef comes from Sussex conservation project, where the English Longhorn cattle lead a wholly natural lifestyle,” says the blurb on their site. “The beef is aged for 35 days before being ground into 100% steak patties.” So that at least compensated for the lame pub. Pity Troll’s Pantry can’t find a better place to ally with.

Brioche for breakfast not burgers
Anyway. The brioche thing. It’s had me scratching my head since I first encountered it in Rome, in a venue doing US-inspired burgers. I just can’t quite reconcile the use of brioche buns for burgers.

For me, brioche is quintessentially a breakfast bread. Enriched with egg, dairy and sugar, it lends itself to eating with jam, Nutella (god forbid), coffee and hot chocolate. I don’t get how it’s considered an appropriate partner for the salty, savoury experience that is burger patty and chips.

So when I wanted to make some bean burgers at home, I didn’t want to make brioche buns. I’ll save that for a weekend breakfast, thanks.

Good old Dan Lepard had a good option, a recipe in Short and Sweet, the book that collects his wonderful recipes from the Guardian. His burger bun involves carrot and cumin. And onion. And paprika. In the dough. Yes. Quite odd, perhaps, but it worked well.

If the addition of carrot sounds strange, just think how it helps make for delicious moist cakes. Dan, meanwhile, says, “The grated carrot and corn flour keeps these buns bouncy, soft and moist, helped by the hot oven and a short baking time.”

The original recipe can be found recipe here. The version in Short and Sweet is slightly differnt. Here’s my version,a tad tweaked.

1. Combine the boiling water and milk in a jug. You don’t want it too hot – if you have a thermometer, no more than body temp, or 37C.
2. Once it’s at a suitable temperature, crumble in the yeast.
3. Whisk the butter and egg into the liquid too.
4. Combine the flour, cornflour, salt and spices in a large bowl.
5. Add the liquid to the powders and bring to a dough.
6. Knead for a few minutes to clear (that is, bring it all together nicely), then leave, covered, for 10 minutes.
7. Give the dough another short knead, then leave for another 10 minutes and repeat. Do this once more.

8. Form a ball then leave to prove in a covered bowl in a draught-free spot.

9. When the dough has doubled in size – how long this takes will depend on the temperature of where you leave it – take it out of the bowl.
10. Divide into six pieces. My dough weighed just over a kilo, so each ball weighed about 184g. You could make bigger or small balls depending on what you’re doing with the buns – are you making massive burgers or small ones?
11. Form the pieces into balls, put them on a baking sheet lined with parchment, and leave to prove up again.

12. Preheat your oven to 220C (200C fan).
13. When the balls are plumped up – the original recipe says “until risen by half” – brush the tops with water and sprinkle with seeds.
14. Bake for about 25 minutes, until nicely browned.

We had ours with some bean burgers. I like making bean burgers – you can basically just chuck beans and some stodge and whatever flavours and leftovers you have into a food processor. I used butterbeans, some soffritoed onion and garlic, some bread, a bit of mashed potato, some of the wild garlic and nettle pesto I made a massive batch of after a foraging walk on Sunday.

I’m not going to get into veggie vs meat argument here, as obviously a bean burger is a very different proposition to a real meat burger, lacking that juicy, bloody fattiness. But, like a meat patty, bean burgers can exploit the same satisfying format of condiments (in this case mustardy mayo) and additons (cheese, gerkins) all combined inside a bun. The chips here were actually just made from roasting raw potatoes.

3 responses to “Burger buns with a twist”